Opinion   Columnists  02 May 2019  Seeger’s legacy of song and struggle is now a century old
Opinion, Columnists 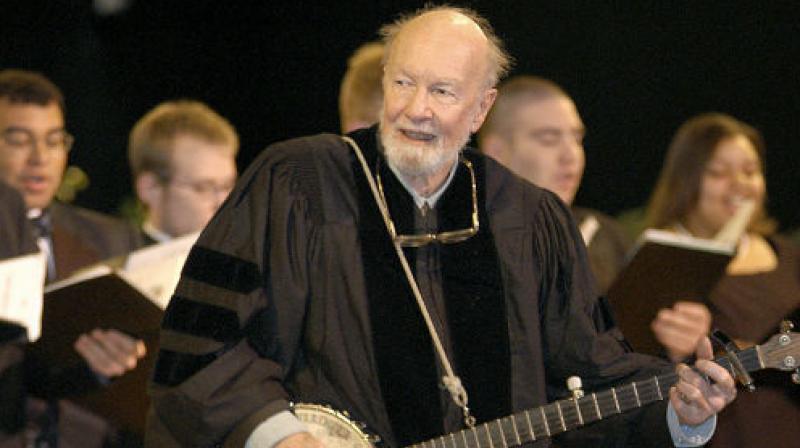 Shortly before he became the second American to die in the First World War in 1916, a young volunteer with the French Foreign Legion wrote a poem that has endured: “I have a rendezvous with death,” it presciently begins, “At some disputed barricade.…”

Around half a century later, a nephew Alan Seeger never knew appropriated a line from his uncle’s verses, “At midnight in a flaming angry town”, and added his own take: “I saw my country’s flag lying torn upon the ground….” He imagines picking up the flag and trying “to wash the garbage off”, before realising the piece of cloth stank because “it had been used for wrapping lies”.

The Torn Flag isn’t among Pete Seeger’s particularly memorable tracks. He struggled to put a melody to it, and eventually decided just to recite the words. His references to redesigning the Stars and Stripes remain a useful metaphor, though, for what he sought to achieve across 70 years as a performer and songwriter. And perhaps a useful reminder that while Donald Trump may be something of an anomaly, he is also part of a trajectory.

Pete Seeger was born 100 years ago this Friday, during Woodrow Wilson’s second presidential term, and lived long enough to usher in America’s first black president with a rousing rendition of This Land is Your Land, unofficially acknowledged as the United States’ alternative national anthem, written by Seeger’s friend and mentor Woodrow Wilson Guthrie, better known as Woody. It was a momentous occasion, but when, in a conversation on the eve of his 90th birthday, I asked Pete what had been going through his mind at the time, he responded with disarming honesty: “I was just hoping I’d remember the next verse.” And he did, including the ones about private property and soup kitchens that seldom get sung. Barack Obama sang along — Seeger’s audiences seldom got away with keeping their lips sealed — and later told singer that he recalled being introduced to his recordings at the age of four.

Pete himself was precociously politically motivated at a tender age. Playing cowboys and Indians, he instinctively empathised with the latter. At school, he edited a cyclostyled journal that attracted attention for its “subversive” content. A scholarship took him to Harvard, where his contemporaries included John F. Kennedy, but he was bored by the classes and dropped out after a year or so to pursue his calling. He had been enchanted on first encountering the five-string banjo as a 17-year-old, and mastering the instrument eventually became something of an obsession, but not before he had wandered across the countryside, making a meagre living by selling paintings of their abodes to local farmers and the like. He was 21 when he first encountered Woody Guthrie at a New York City benefit for dust bowl refugees — and in the annals of popular Western culture that deserves to be recorded as no less seminal an occurrence than John Lennon’s introduction to Paul McCartney less than two decades later. Speaking of whom, it is pertinent to recall that in early 1969, Lennon watched with tears in his eyes as a TV news clip showed Seeger leading an anti-war crowd in Washington estimated at quarter-of-a-million strong in singing the chorus from Give Peace a Chance.

Seeger had by then been a vocal advocate for sometimes unpopular causes for about 30 years. He was invariably an early adopter, often latching on to what he thought was right long before the consciousness permeated the broader left — from the American civil rights movement (he introduced Martin Luther King Jr to the anthem We Shall Overcome) to environmentalism (sparked by Rachel Carson’s 1962 book Silent Spring) and opposition to the war against Vietnam.

He performed at Peekskill alongside Paul Robeson, sang for trade unions up and down the country, and was hauled up before the House Un-American Activities Committee, where he pleaded the first amendment — the right to free speech.

It was perhaps during his struggles as a blacklisted singer that Seeger sowed his most resilient seeds, by turning up, often unannounced, at schools, colleges and summer camps, and engaging young audiences. That is how songs such as This Land is Your Land and Guantanamera seeped into the American national consciousness.