Both died of cancer, despite getting the best possible international treatment – Irrfan Khan in London and Rishi Kapoor in New York 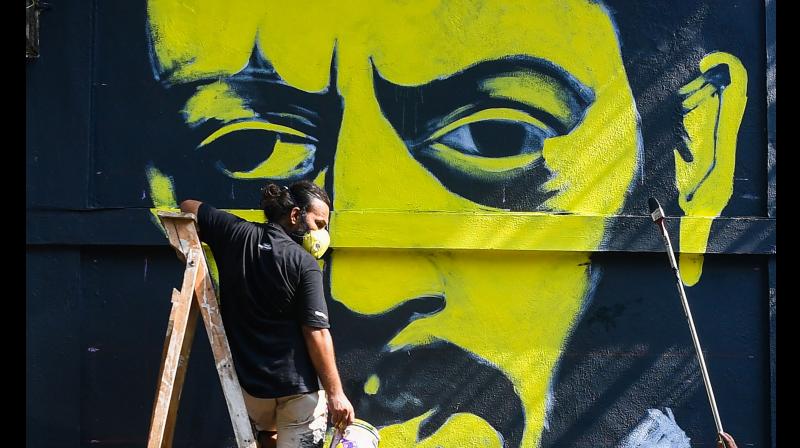 An artist paints a mural of Bollywood actor Irrfan Khan on a wall, in Mumbai. PTI Photo

It was the last day of what has been a truly terrible month in more ways than one. We lost two stupendous actors in under 48 hours: first to go was Irrfan Khan (53). Then came the news early on Thursday morning about Rishi (Chintu) Kapoor (67) succumbing. Both died of cancer, despite getting the best possible international treatment – Irrfan Khan in London and Rishi Kapoor in New York. The battles fought by the two men were well documented and it was indeed their respective courageous decision to share details of their fight against the Big-C with their millions of fans across the world, that provided responsible information in place of ugly rumours. An earlier generation of movie stars would have kept such news under wraps. Even though a decade separated these two actors, their remarkable spirit was the same. Till the very end, they “entertained” their admirers, Rishi Kapoor through his wildly popular, often acerbic, entirely politically incorrect tweets, and Irrfan through regular blogs which provided philosophical insights and accurate updates about his treatment. During the initial phase, Rishi Kapoor’s family chose to be discreet, when he left abruptly for America. Their statement said he had gone there for “further investigations”. Their need for privacy was respected by all and India prayed for his speedy recovery. It was a little different in Irrfan’s case. The moment his diagnosis came in, he shared the dire news openly with fans, without concealing any medical details about the rare neuroendocrinal tumor lodged in his brain. In a way, that bold declaration prepared everybody to expect the worst. It was only when he came back to India to bravely complete his last film -- Angrezi Medium -- that hopes went up and fans assumed he was on his way to full recovery.

In Rishi Kapoor’s case, his long absence (two years) became less painful when his doting wife Neetu started posting jaunty images of their rented apartment in New York, with her hosting Bollywood colleagues who were visiting the Big Apple. It was terrific to see the film fraternity standing by and making it a point to go across and cheer up the much-loved star as he recuperated. Kapoor’s medical updates were not as precise as those posted by Irrfan, but the happy pics of the Kapoor clan eating at posh restaurants in Manhattan (Rishi, like all the Kapoors, was a diehard foodie), brought a smile to many faces. And when Alia Bhatt (who is dating Ranbir Kapoor), was also photographed with the family, the happy parivar picture completed the story and in a way sealed the romance. Once both the stars (Irrfan and Rishi) came back to Mumbai, the film industry made much of them – and deservedly so. Not only because the two of them had earned the respect of their audiences over the years  (close to 50, in Rishi’s case), through performances that were consistently top-notch, but their personal equations within the film fraternity were very strong. This is a great tribute to their individuality and immense goodwill, in an industry that is defined by jealousy, insecurity and competitiveness.

Both stars were taken by cancer. And here’s my humble argument, while extending heartfelt sympathy to their grieving families. I just want all of us to understand that right here in India, we have world-class oncologists and the highly prestigious Tata Memorial Hospital sees patients from across the globe who come with enormous hope in their hearts to avail of the best  cancer treatment possible. Some would say what our doctors offer cancer patients is not just comparable but often far superior to the treatment offered at cancer facilities overseas. I have been associated with two prominent cancer care associations for over 30 years. Though I have yet to visit the Devi Prasad Shetty: Narayana Medical Centre in Bengaluru, I have met patients who have travelled across continents to receive expert and very kind treatment there. Most of these success stories are so heart-warming! Particularly those involving senior citizens who have responded wonderfully well to the more personalised approach in our hospitals after other international clinics have given up on them and packed them home to die. Despondent and resigned to their fate, labelled as terminal cases who are unlikely to pull through, they go to desi hospitals as the last resort. And survive! What if they had gone there to start with? It is these stories we need to project to convince some of our high-profile, celebrity cancer patients. Those who take the first flight out, believing they stand a better chance in foreign hospitals. This is not always true! Some wealthy and fortunate families can afford to pay the astronomical costs involved in treating their loved ones at reputed global hospitals. To them I would say -- please do see the remarkable work being done by our superb surgeons right here in India. Have faith in their competence and skills. Give yourself the chance of being looked after by your own. See the difference it makes to your morale when you are treated like more than just a number on a bed. Unlike foreign doctors who strictly adhere to protocol, since they are so afraid of facing malpractice suits if things don’t work out, our doctors are far more sensitive and think out of the box, often going beyond the rulebook, beyond the call of duty, to reassure patients and their anxious families. We really do have the best! And our more humanitarian approach frequently makes a life-altering difference to not just patients but their loving and worried family members, as well.

Irrfan’s lockdown funeral took place a few hours before Rishi Kapoor breathed his last. Rishi’s was attended by family members (his beloved daughter couldn’t make it in time, due to lockdown travel restrictions) and close friends, all of them appropriately masked. Both men would have attracted a sea of mourners under normal circumstances. We live in strange and sad times indeed. Lonely and isolated in life… lonelier and even more isolated in death. The virus affects us all and spares not a soul.

As India bids goodbye to these two astounding stalwarts, let us also include our close to 2,000 Covid-19 victims in our collective prayers.