Opinion   Columnists  02 Jun 2021  Aakar Patel | How Jaishankar put on mat in US over Hindutva and other issues
Opinion, Columnists 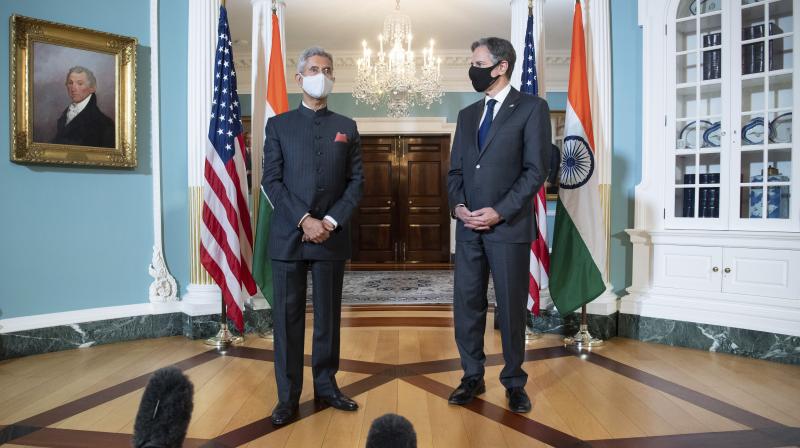 US Secretary of State Antony Blinken meets with Indian External Affairs Minister Subrahmanyam Jaishankar at the State Department in Washington, on May 28, 2021. (Saul Loeb/Pool via AP)

India’s external affairs minister Subrahmanyam Jaishankar was till Saturday on a visit to the United States. The first half of his trip was apparently not very productive as the person he had come to meet, US secretary of state Antony J. Blinken, had to go to the Middle East on an urgent visit. Mr Jaishankar met him only several days after reaching the US. In the meantime, the minister met the Indian teams at the United Nations and had sundry other meetings. He also had an interview with former President Donald Trump’s national security adviser Lt. Gen. H.R. McMaster. The general, who is familiar with India and has visited it, spoke about radicalism in the region and how extremism had hurt Pakistan. He then asked Mr Jaishankar: “I wanted to ask you about how you see political developments in your own country. You are not a partisan person. You have served with great distinction across many administrations. There is concern in the midst of the pandemic about some of these Hindutva policies that could be undermining the secular nature of Indian democracy… Are India’s friends right to be concerned about some of these recent trends?”

Mr Jaishankar first corrected Gen. McMaster to say that he was actually partisan: “Let me clarify something. I served multiple administrations when I was a civil servant. I am today an elected member of Parliament. Do I have a political viewpoint and political interest? Of course, I do. Hopefully I will be able to articulate the interest that I represent.” He then says he will give two replies: a “straight political answer” and a “slightly more nuanced societal answer”. His straight political answer is that in the past India had “votebank politics”, but no longer does because democracy had deepened under the BJP. This had happened through "broader representation in politics and in leadership positions and in civil society of people… who are much more confident about their culture, about their language about their beliefs. These are people who are less from the English-speaking world, less connected to other global centres”. Mr Jaishankar says there’s nothing to be concerned about as there is no problem, and this set of people he is referring to are “judged politically harshly and it is often used to create a certain narrative”.

His nuanced societal answer is that the BJP government doesn’t discriminate, Mr Jaishankar says, as they gave extra rations to people in the pandemic and put money in people’s Jan Dhan accounts without separating them by religion.

We should perhaps be thankful to Mr Jaishankar that India so far hasn’t decided to give entitlements to the poor based on religion. But while we are thankful. we should also note Mr Jaishankar didn’t actually answer what was asked. Gen. McMaster’s question was framed around the word Hindutva and its policies. What are they? They are the introduction of religion into citizenship. The United Nations and the European Union and members of the US Congress expressed disappointment and alarm over India’s Citizenship Amendment Act.

The US International Commission on Religious Freedom report for 2021 identified laws in India that criminalise conversion, especially of women to Islam. These laws are the BJP’s Uttarakhand Freedom of Religion Act 2018, Himachal Pradesh Freedom of Religion Act 2019, Madhya Pradesh Dharma Swatantreya Adhyadesh 2020, Uttar Pradesh Vidhi Viruddh Dharma Samparivartan Pratishedh Adhyadesh 2020 and Gujarat Freedom of Religion (Amendment) Act 2021. The USCIRF report (which recommends sanctions against India) says while these laws ‘target inter-faith marriage in particular, several other states prohibit conversion based on vague criteria, including force, inducement, allurement, coercion, fraud, or misrepresentation. These anti-conversion laws are often the basis for false accusations, harassment, and violence against non-Hindus that occur with impunity. In 2020, for example, mobs --fuelled by false accusations of forced conversions -- attacked Christians, destroyed churches, and disrupted religious worship services”.

India under Narendra Modi has spent a lot of energy in drafting laws that go after minorities. The Gujarat Animal Preservation (Amendment) Bill 2017 punishes cow slaughter, that is ostensibly an economic crime, with life in jail. No other economic crime carries a life sentence. More than half of all arrests under the National Security Act in Uttar Pradesh in 2020 were for cow slaughter. This is a law that allows preventive detention, meaning the government locks up people without any crime. Muslim men are the only community for whom divorce is not a civil wrong but a criminal one. This is the Muslim Women (Protection of Rights on Marriage) Act 2019. It criminalises a non-act. Triple talaq in one sitting is not lawful in India. If I say talaq to my wife three times, our marriage doesn’t end, and it is not a crime. If a Muslim man says it to his wife, their marriage doesn’t end, but it is a crime.

India uses a 12-gauge shotgun firing birdshot into protesters in only one state. In no other state in India except Kashmir is the so-called pellet gun used on crowds. It has blinded and wounded thousands, including infants nowhere near the protest.

I could go on, but you get the picture. These are the things that India’s friends are concerned about. They are new laws that are the gift to us of Hindutva, which is why Gen. McMaster used that term.

Mr Jaishankar replied to Gen. McMaster without once using the word “Hindutva”, and without referring to any of the laws India was getting pulled up for around the world. The reason he ran away from the debate, of course, was that there is no defence. Obfuscation and avoiding the issue was the only way to respond to the accusation, which is a correct one, that India was harming itself and its own people through Hindutva.