The big question is whether Modi and his deputy, home minister Amit Shah, will think out of the box and do course correction? 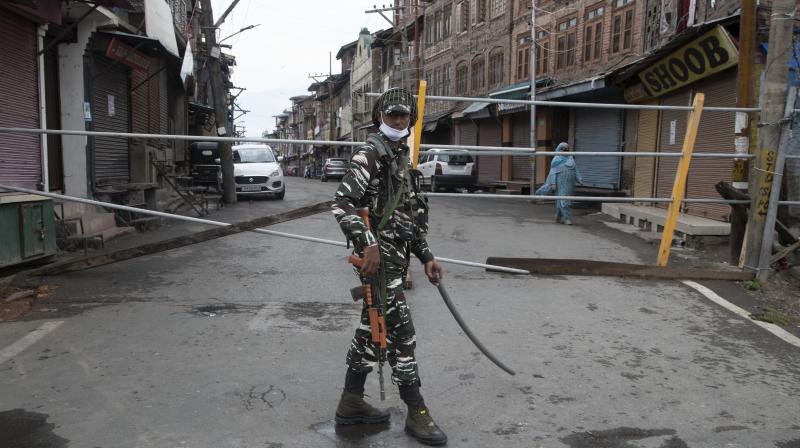 An Indian paramilitary soldier stands guard by a closed road, as Kashmiris marked Eid during lockdown to curb the spread of coronavirus in in Srinagar. AP Photo

What might be the singular big announcement in Prime Minister Narendra Modi’s Independence Day speech from the ramparts of Red Fort in New Delhi? With the Ram Temple inauguration done many speculate that it may have something to do with Jammu and Kashmir, where the resumption of the democratic process has been long overdue.

However, there is a catch. Post the abolition of Article 370, the state was bifurcated and reduced to two Union territories. It is not just the Abdullahs but many political players from Jammu region are also less than enthusiastic about Jammu and Kashmir’s UT status.

The big question doing the rounds is whether Modi and his deputy, home minister Amit Shah, will think out of the box and do course correction?

There is renewed disquiet in the Congress party over Sonia Gandhi's stepping down as party chief and Rahul Gandhi taking over the mantle of leadership.

The absurd replay of son taking over from mother is not bizarre enough. There is an intense tussle between those considered loyal to Sonia and the members of team Rahul.

Thus if the edifice of Sonia’s preeminence is to end, it requires a dismantling. In this context, the Congress’ internal tussle for supremacy may yet produce some jarring notes.

What is it about the Masters of Philosophy degree (MPhil) that it has been dropped in the draft New Education Policy? The MPhil was introduced as a programme to train research students for more serious and rigorous postgraduate work.

The MPhil was considered important because many decorate (PhD) scholars were found wanting in research skills. A political explanation might be that two young Gandhis — Rahul and cousin Varun — are MPhil holders, both in developmental economics from Cambridge University and the London School of Economics, respectively.
Veteran in a spot

Janardan Dwivedi must be ruing the moment he decided to attend a meeting in memory of the late Sheila Dikshit, held by the Delhi Pradesh Congress Committee.

A motley gathering, after paying lavish tribute to the former Delhi chief minister, turned its attention to the Congress crisis in Rajasthan and the leadership issue.

The former AICC general secretary was caught in the middle when someone asked Dwivedi to raise a banner of revolt from within the party. With his son already in the BJP, Dwivedi, who once took pride in being Sonia Gandhi’s Hindi speechwriter, decided to flee instead of getting bogged down by the rebellious deliberations.

The appointment of Hardik Satishchandra Shah in the Prime Minister’s Office has taken many by surprise. Shah was promoted to the IAS in 2010 and is now PM Narendra Modi’s private secretary.

His rise has been spectacular. After doing his M Tech, Shah was drafted into Gujarat’s environment and forest department sometime in 2004.

A fellowship abroad was followed by an appointment as member secretary in the Gujarat environment board.