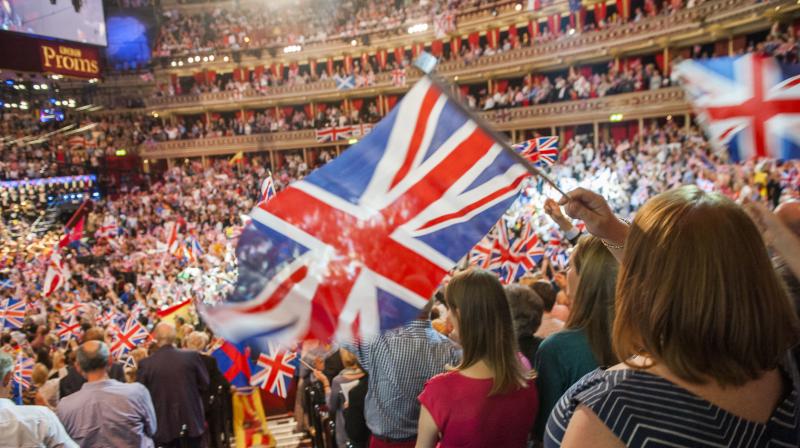 In this 2014 file photo, the audience reacts during the Proms at Royal Albert Hall, London. The BBC has ditched the lyrics of 'Rule Britannia!' for its traditional summer-ending concert amid a controversy over the song's celebration of the British Empire. (AP file photo)

My friend who lives in California says there are fumes engulfing her house. The summer storms have brought vast fires, the country is alight. Perhaps they’ve sent in the federal agencies available to US administrators — they call in the National Guard when the local police are the cause and targets of public dissent. Let’s hope the fumes will subside and her husband can take to the scorched golf course soon!

The Californian emergency, like the Australian fires earlier in this era of climate change and sizzling seasons, are alarming — as are the locust storms I read about engulfing parts of Bharat Mata — but they are not new or unprecedented.

I haven’t looked up the precise dates on Google, as I perhaps should have, but there were famous fires which blazed in and reduced the great cities of London and New York. They were legendary as they gave rise to national songs, a comparison of which speaks volumes about relative national consciousness.

The song about the London fire goes:

And the American song goes:

I think the contrast in national attitudes speaks through the lyrics. The English song gets down to action. The American one to a meaningless chant and an escape to richer climes in California in search of gold. No pouring on water.

And this week, the lyrics of songs — we should really call them anthems — have caused a public hoo-ha involving the BBC, its director general, Lord Hall, and prime minister Boris Johnson.

The controversy is occasioned by the tradition of three anthems being sung by the audience and sometimes by professional choirs to conclude the series of summer concerts in the Albert Hall sponsored by the BBC. The popular concerts are known as the BBC Promenade concerts as the Albert Hall’s central ground floor space is cleared and, apart from those seated in the stalls, given over to a standing audience. They don’t actually promenade but can shift about as they listen to the performance of various guest orchestras and conductors from around the world.

The ‘Proms’ are played over several evenings and at the end, led by the performing orchestra, the audience bursts into renditions of Edward Elgar’s “Land of Hope and Glory”, of “Rule Britannia” and of William Blake’s “Jerusalem”. The first two are patently patriotic songs. The first one celebrates the freedom of British citizens and the lyrics include the words:

In the wake of the Black-Lives-Matter inspired movement to demolish the statues of slave-owners of the past and rewrite history to “deglorify” colonial adventures, the verses of this anthem have been deemed by some as racist. They undoubtedly glorify empire and there certainly is a case, from the point of view of the colonised, or even from that of liberal minded contemporary Britons, for not bragging about it.

The other anthem to come under fire from the same source and for the same reason was Rule Britannia whose lyrics include the chorus:

The objectors conclude that apart from the celebratory hubris of the lyrics, there is an implication that other nations can and have been slaves but Britons, through some virtue, have not and will never be. The song doesn’t say precisely that but in sensitive times some may feel it does.

As far as the third anthem mentioned in this list of possibly insulting lyrics is Blake’s Jerusalem and, gentle reader, I object to this objection with all my critical acumen — such as it is. The poem, which has the grandeur to become a perpetual anthem, has nothing to do with insulting anyone. Blake is asking if there is any true Christianity in the land which has, in his time, fallen under the shadow of “dark satanic mills”.

In response to the lash of criticism, Lord Hall, director general of the BBC, conceded that this year there will be, at the conclusion of the Proms, instrumental or orchestral renditions of those anthems, but there will be no lyrics sung to them.

His slightly disingenuous reason was that since the Proms this year will not have a Promenading audience thronging the floor of the Albert Hall, there will be no one to sing the lyrics. He dodged the possibility of providing a socially distanced choir or even a single soprano or tenor to give voice to them.

Boris Johnson, on being made aware of the BBC’s decision expressed his incredulity.

"I think it's time we stopped our cringing embarrassment about our history," he told reporters.

The Beeb, or ‘Auntie’, as the Brits call their public-service-minded forum, was caught between the latest progressive current of opinion, the ‘Woke’ consciousness, and BoJo’s political reading of the majority of the electorate’s mind. In response to this trap a BBC spokesperson said: “For the avoidance of any doubt, these songs will be sung next year. We obviously share the disappointment of everyone that the Proms will have to be different but believe this is the best solution in the circumstances and look forward to their traditional return next year.”

It’s called kicking the ball into the tall grass.