Indranil Banerjie | Is fall of Kabul a Humpty Dumpty moment for US? 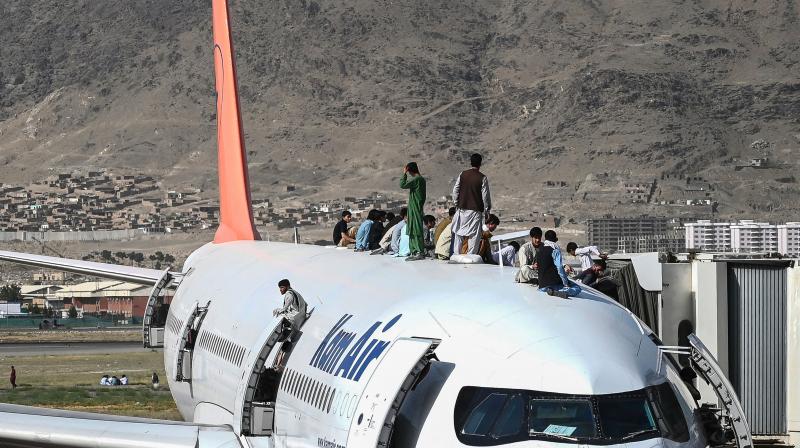 Disgraceful was indeed the word that came to mind when seeing images of the American military exodus from Kabul airport. (Representational Photo:AFP)

Some military defeats are transitory, others are turning points in history. When George Washington, who later became the first President of an independent United States, was the commander-in-chief of the American Patriots he faced his worst military moment at the Battle of Brooklyn (August 1776). His 9,000-strong force was pinned down against the East River by a powerful British contingent and would surely have perished had Washington not engineered a brilliant withdrawal. Amid heavy rain and poor visibility, he ordered his men to round up as many boats as possible during the dark and by morning the entire force had slipped away to the astonishment of the British, who had hoped to deal a death blow to the upstart army. Washington survived to fight another day and eventually free his new country from the British.

Last week, Washington’s 45th successor, US President Joe Biden, effected another retreat, this time from distant Afghanistan where Americans had fought their “longest war” -- and lost. What military historians and geopolitical analysts will be asking is whether this defeat is an ephemeral or a defining moment in America’s history.

For, nothing changes the course of history more dramatically than the outcome of wars. Scholars to this day study wars of the past in an effort to understand the workings of geopolitical relations, the rise and fall of empires and the fortunes of continents.

One favourite object of study is the Peloponnesian Wars (431-404 BC) of ancient Greece fought between the powerful Athenians and the rugged Spartans. The turning point in this long war was the failed Athenian invasion of Syracuse. This defeat forever dented the power of Athens and eventually finished this spectacularly successful ancient civilisation.

Another turning point in history was the fall of Singapore during the Second World War in February 1942, where a huge contingent of British Indian soldiers was abandoned to the advancing Japanese. Winston Churchill called it the “worst disaster” in British military history. But it was more: it was the end of British prestige in Asia.

Of the more than 80,000 soldiers left behind in Singapore, more than 40,000 Indian soldiers embittered by the betrayal by their colonial masters later joined Netaji Subhash Chandra Bose’s Indian National Army and went on to fight their former masters in the Battle of Imphal. The INA and the Japanese forces lost but the British knew the game was up. They could no longer rely on Indian soldiers to fight their wars. Britain decided to quit India even before the end of the Second World War, ending a colonial enterprise that had lasted almost two centuries.

In retrospect, it is not a military retreat by itself that matters but the related issue of prestige. Winston Churchill hit the nail on the head when he remarked: “Defeat is one thing; disgrace is another.” This was after the shameful British surrender at the Battle of Tobruk on June 20, 1942.

Disgraceful was indeed the word that came to mind when seeing images of the American military exodus from Kabul airport, the surging crowds desperate to escape and the bearded Taliban swaggering into the Kabul presidential palace.

“The indelible images from Kabul this week have done serious damage to US credibility abroad. The Chinese Communist Party media mouthpiece, Global Times, has already used the chaos in Afghanistan to warn Taiwan that the United States cannot be counted on to come to its aid when China eventually attacks the island”, wrote Robert C. O’Brien, former US national security adviser, and John Ratcliffe, former director of national intelligence, in Foreign Affairs. They went on to add: “We believe it is far more important for the United States to immediately take steps to shore up its alliances and diplomatic standing, especially in the Indo-Pacific region.”

But the damage had already been done. Across Asia, leaders were shaking their heads. Vietnam has already signalled closer ties with China and made it clear it would not side with any superpower. Singapore has voiced its concerns over the Afghan withdrawal and Prime Minister Lee Hsien Loong remarked during the visit of US vice-president Kamala Devi Harris: “We hope Afghanistan does not become an epicentre for terrorism again.”

President Biden, who is at the wrong end of the stick for what is seen as a botched exit from Afghanistan, has not emerged as a reliable guarantor of global peace and order. His recent tweet that the decision to end military operations was “not just about Afghanistan” but “about ending an era of major military operations to remake other countries” has made many world leaders sit up. Is this a signal that President Biden won’t use US military power to further policy goals or keep its commitments to allies? That is the question at the heart of the geopolitical issue of the future of US power.

If the United States is to take a back seat, it is inevitable that China will step forward. President Biden’s address to the American people suggested a lack of geopolitical sapience. His declaration -- “To those asking for a third decade of war in Afghanistan, I ask, ‘What is the vital national interest’?” -- betrayed a certain naivete unbecoming of a US President.

For it’s not the withdrawal decision per se that is at the heart of the matter but the manner of the retreat and the subsequent enunciation of intent. It was a flawed exit, as many have observed, and its responsibility rested squarely with the Biden administration.

His attempts to blame his predecessor for the debacle has merely served to reduce his stature even further. A leader and his nation diminished in the eyes of the world suggests the inevitable dissipation of global prestige and ultimately power. Yet Mr Biden, in his address, was right about one thing: “Staying longer was not an option”. For, the United States had indeed long lost its longest war and it was only bleeding. He was also right to point out: “As we close 20 years of war and strife and pain and sacrifice, it’s time to look to the future, not the past…”

But what kind of future? While he cannot be blamed for his country’s military defeat in Afghanistan, he does need to understand the nature of power, war and defeat. Writer Ernest Hemingway was not off the mark when he observed: “Once we have a war there is only one thing to do. It must be won. For defeat brings worse things than any that can ever happen in war.”