According to several experts, being exposed to Omicron builds up antibodies that counter the Delta or other past strains 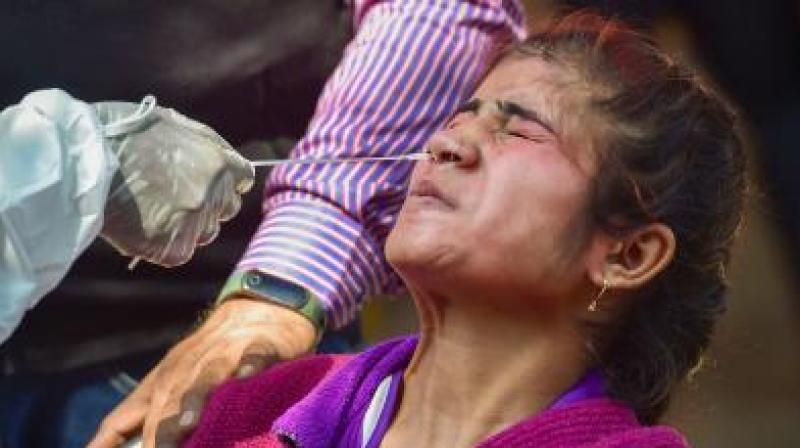 The storm of infection, as distinct from the waves in the past, comes quickly, runs through a community community and drops off equally fast. (Representational Image/ PTI)

As the new year 2022 dawns, the far more transmissive Covid-19 strain christened Omicron is lurking in India and ravaging several nations in the West. Alongside this persisting challenge, with global economic consequences, a number of geopolitical friction points are also looming. What then does the new year really augur?

The geopolitical friction points are -- the Russian threat to Ukraine, the Iranian nuclear programme and Israeli “red lines” and Chinese jingoism over Taiwan and its territorial claims. But the more immediate danger is from the new Covid variant Omicron. The medical consensus is building around a few points. Data from nations already hit by it constitutes the initial evidence. For one, it is highly transmissible. Also, so far it appears to be less lethal than the Delta variant.

Further, according to several experts, being exposed to Omicron builds up antibodies that counter the Delta or other past strains. Finally, the storm of infection, as distinct from the waves in the past, comes quickly, runs through a community community and drops off equally fast. In India, we are at the beginning of this possible steep up and down infection curve.

The effect of this new tsunami will vary from one nation to another. China presents an interesting example. In Xi’an, 13 million people have been forced indoors and restricted to their homes. This kind of draconian methodology China has so far used to very effectively contain Covid breakouts. But this time the foe is different. Many experts feel that Omicron will escape any quarantine as it is highly transmissible. If that happens, China will face a very serious problem as its vaccines are not very effective and the population has not been exposed to any wide surge. Thus, community level immunity may not have developed.

China faces two additional problems. At the beginning of February its annual spring vacation begins, when normally there is a huge movement of people internally. Also, the 2022 Winter Olympics is due to kick off on February 4. Already the United States and a number of Western nations have announced a boycott due to the gross breach of human rights in Xinjiang and Hong Kong.

Quarantining athletes for a fortnight on arrival would not work as it hampers their fitness. Other nations like Australia and New Zealand also face similar challenges as they used quarantine to stymie the pandemic, and not vaccines and community exposure. India is better prepared this time and a combination of increased testing, home quarantine of asymptotic or non-seriously symptomatic infected should help get over the surge. But the dislocation of normal life and a recovering economy is inevitable.

The other major issue will be the fate of liberal democracies in 2022. The Summit for Democracy called by US President Joe Biden on December 9-10 last year received mixed reviews. First was the controversy over the list of invitees. With Poland in and Hungary out, the question asked was -- how do you grade regressing democracies?

Moreover, after the damage done to America’s global image by former President Donald Trump and the ongoing tinkering with electoral rules and gerrymandering in Republican-controlled states casts further aspersions on US democracy. That is why it was easier for China and Russia to debunk the summit and even question the quality of US democracy. The ambassadors of both nations penned a joint op-ed in a major US publication to decry the “Cold War” thinking. The Chinese foreign ministry even alleged that the US was turning democracy into a “weapon of mass destruction” to interfere in the internal affairs of other countries. China convened a rival gathering of 120 nations, that it named the International Forum on Democracy.

Prime Minister Narendra Modi attended Mr Biden’s virtual summit and described it as a “timely platform” for furthering cooperation among democracies. Pakistan, which was invited but Sri Lanka was not, decided to skip it to make common cause with China.

The Chinese foreign ministry spokesman instantly described Pakistan as a “real iron brother”. But the issue before India will be the growing gap between the actions of the BJP at home and the government’s liberal posturing abroad. This may not continue to be ignored by the United States as President Biden is planning an in-person summit to follow up on the cause of democracy later this year.

Even if one discounts the BJP’s electoral need to polarise when facing extremely vital state elections in Uttar Pradesh and four other states, the attack on churches and the fulminations by religious leaders to eliminate Islam at Haridwar, including by the use of violence, are condemnable. This twin attack on Islam and Christianity can alienate opinion in a wide swathe of nations, even if the governments largely ignore it for political and diplomatic reasons.

This bid by the BJP to systematically implement its Hindutva agenda will face resistance at home as the Opposition consolidates around issues of poor governance. Supplanting a constitutional model on which the nation has been governed for 75 years will not be easy. It is a reminder of Rome in AD 384 when supporters of surging Christianity removed the pagan Altar of Victory from the Roman Senate, after four centuries of it being there. The New York Times, in a piece on Christianity’s decline as an organising principle for Western civilisation, notes the views of pagan Roman philosopher Symmachus. He rejected the dogmatic claims of the new religion to truth with the injunction that there “cannot be only one path toward such great mystery”. This is the question before proponents of Hindutva as they try to constrict the Ganga-like openness and flow of traditional Hinduism.

Archbishop Desmond Tutu of South Africa, who provided the moral moorings for his nation during and after the apartheid era, has just passed away. He argued that anger at apartheid was natural, but it must not be allowed to turn into hatred. He correctly noted that “Whites, in being those who oppress others, dehumanised themselves”. This is a lesson that Mahatma Gandhi also espoused. Can the BJP also abide by it and neutralise elements, aligned to it, that feed on real and imagined historical hurts and religious prejudices. Hopefully, the people of the five states would vote sensibly and endorse the thoughts of Mahatma Gandhi and Archbishop Tutu.