Mano is also serving as the president of the Palliative Care Thailand Foundation, where he trained over 1,000 volunteers 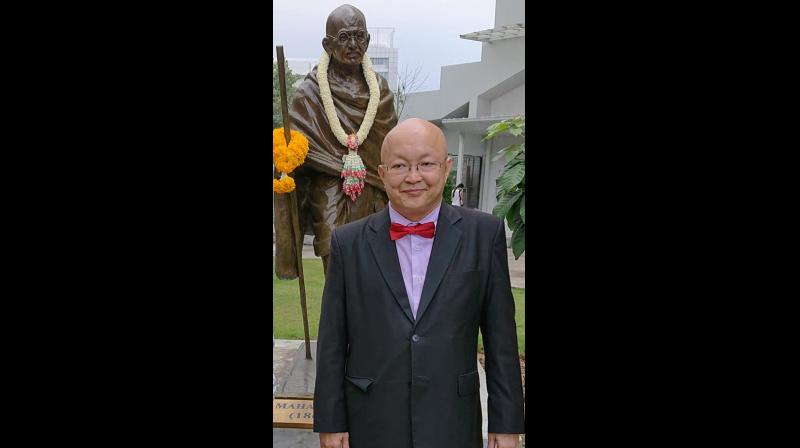 Indian music, dance, theatre, yoga and, even festivals, all contribute to the holistic vision of the Gandhi Institute, which is a part of the sprawling Rangsit University, in Bangkok.

Behind all these, the institute has three aims — to be a think-tank for policymakers in governments, to develop leaders for the future based on Gandhian principles, and to bring the Indian and Thai communities closer together.

These were spelt out by the director of the institute, Mano Laohavanich, a doctor by training who was once ordained as a monk, and has even tried his hand in politics.

Mano studied Sanskrit at Oxford (where he graduated with a Boden Prize), Buddhist ethics at Harvard and healing meditation at Hamburg University, and caused quite a stir when he returned to Thailand and questioned many concepts of Buddhism.

In fact, he’s currently an honorary advisor of Thailand’s Senate Commission on Poverty and Inequality Eradication, and an advisor to Thailand’s Parliamentary Commission on Religions, Arts and Culture.

Mano is also serving as the president of the Palliative Care Thailand Foundation, where he has trained over 1,000 volunteers from Thailand and the neighbouring countries, in the last decade.

Mano admires Gandhi for promoting peace in all religions as well as for his faith in non-violence and absolute truth. These are the principles he hopes to inculcate in the Gandhi Institute, where he was appointed director, when it was started in 2017 as part of the Rangsit University’s College of Social Innovation.

One of the impressive events he has held regularly, are the Gandhi Talk Series, where top dignitaries, from ambassadors to local luminaries, have spoken on religion, politics and the importance of Gandhi in public life.

Having been involved in the world of politics and religion, Mano realises the importance of developing a new brand of leaders for the future. That’s why one of the highlights of the Institute, is the “free” Leadership Training programme held on Saturdays, which has attracted many youngsters. It starts with yoga-lessons in the morning, followed by sessions with academics and counsellors.

“Yoga involves the body, mind and soul, which are vital for leadership-development,” states the doctor. His knowledge of religions also helps him encourage freethinking among the future leaders. Mano is inspired by the Center for the Study of World Religions in Harvard, and plans to create a 21-storey building at Rangsit Varsity, where world-leaders could visit, stay, give lectures and spend time together. “We could have dialogues for life, innovative ways to solve problems and organise training programs for the youth,” he declared.

It’s a five-year dream project, and when the architectural and financial plans are ready, he hopes to use his many connections to get funds from international donors, including well-known names like Bill Gates. “Institutes are made not of buildings, but relationships” he said simply.

Mano admitted that the Covid pandemic had thrown a spanner in many of his projects, but, on the other hand, it has also uniquely augmented his “courses”. He spoke of the two Zoom sessions they had held, on the subject, “how to apply Gandhian philosophy during the lockdown”, which was addressed by two noted psychologists from India and attracted many participants. They also held an essay competition on “Gandhi and Covid-19”, which attracted as many as 100 entries.

The climax was organising a vibrant play on Gandhi entitled The Stick, based on the five Gandhian Principles (service, nationalism, non-violence, family, girl child), which had a 60-strong cast of Indians and Thais, including talented musicians, dancers and actors. It was so successful that they held a second show of the play, at the prestigious Bangkok Bank auditorium, which was totally enjoyed by the senior members of the bank, including its CEO.

Mano is supported in this project by his energetic assistant director from India, Sanjay Kumar. The latter, after a long communications career with Indian and international organisations, plans to use his skills of organising multilateral events to connect multinational communities, at the Gandhi Institute.

He was proud to start a Thai-Indian Theatre Club, after the success of the Gandhi play. He has now launched a Thai-Indian Super Star Singing Series, where anyone who loves to sing, will be encouraged to participate. “Action with Passion” is his mantra, and he has numerous projects in mind, to tap the surfeit of talent in the country.

“Do you know that there are at least 150 yoga teachers in the city? We want to give a chance to all of them, as also to the many others who have musical and other talents,” he stated.

It all fits in with the Gandhi Institute’s holistic aim to tap the ‘inner resources’ of individuals.

In order to get the communities involved, Mano and Sanjay Kumar were proud to successfully organise big Ganesh festivals, complete with puja, procession, and even immersion in the waters of the Chaophaya river where Thais and Indians partook in the festivities together. The images of Ganesh were created out of ecological materials by talented Thai artisans.

The Gandhi Institute now plans to do a similar community-event for the festival of Holi.

“We are a listening organisation, and we are always keeping our ears open for new ideas and events,” said Mano. He described the Gandhi Institute as an “activity-based institute” which was what made it different from many other “Indian” institutes in the city.

He is hopeful that their holistic vision for the institute will be fully realised.