Indranil Banerjie | Global climate calamity is here: Does anybody care? 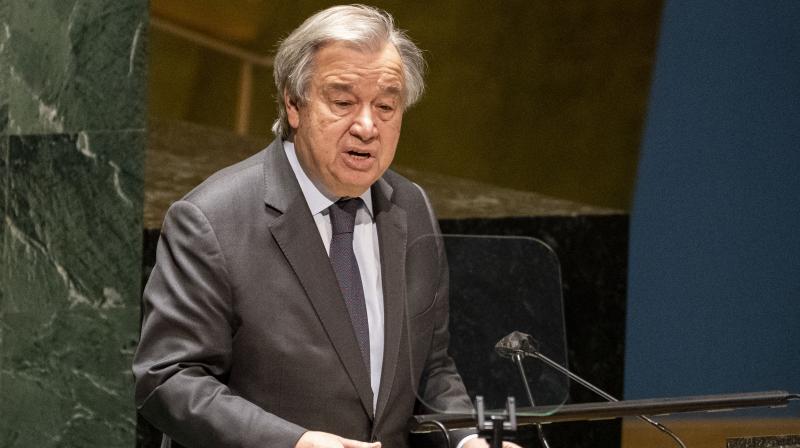 Hindu mythology recounts several events of mass extinctions and similar catastrophes. In one legend, Manu, the law giver, survives a great flood that destroys all of humanity. Warned by a fish, Manu builds a boat and
ties it to the fish’s horn and is steered to safety. When the waters recede, Manu performs a sacrifice and from the waters a woman is born: the two procreate to found a new human race.

Similar myths exist in many cultures and religions. Now science tells us that such a situation is not all that fanciful and could occur relatively soon.

In its latest report on the approaching catastrophic climate change, the UN’s Intergovernmental Panel on Climate Change, or IPCC, has warned all of us on this planet that it is now certain that the world is headed for disastrous times, including rising oceans that will submerge vast parts of the inhabited world.
The IPCC’s 3,600-page Sixth Assessment Report released on Monday is considered the most dire of the many studies prepared by this group of global scientists and climatologists. Once seen as a problem of the future, severe environmental consequences of global warming have, according to the report, “become a here-and-now reality”.

The report points to the fact that in the past year alone, “the world has seen a cascade of unprecedented floods, heatwaves and wildfires across four continents. All these impacts will accelerate in the coming decades even if the fossil fuel pollution driving climate change is rapidly brought to heel... As nations struggle to finally bend the curve of carbon dioxide emissions downward, they must also prepare for a climate onslaught that in some cases can no longer be avoided”.

All attempts to prevent climate change are failing and the situation is worsening. The key findings are frightening:

*Weather and climate extremes have already caused “irreversible impacts” in both human society and the natural world: “No matter how quickly carbon pollution driving global warming is drawn down, a billion people will be at risk from coastal climate hazards such as increasingly powerful storms amplified by rising seas.”

*The earth’s climate system could arrive at tipping points that would be triggered at different thresholds of global warming. These would include catastrophic events such as “the melting of ice sheets atop Greenland and the West Antarctic, which have enough frozen water to lift oceans 13 metres. In a more immediate future, some regions... and coastlines almost everywhere could be battered by multiple climate calamities: drought, heatwaves, cyclones, wildfires, flooding.”

*Currently, some 900 million people living within 33 feet of the sea level are vulnerable: “The population exposed to once-a-century coastal flooding will double if oceans rise 75 cm (30 inches), well within the range of 2100 projections.”

The crux of the issue, however, is not the doomsday predictions themselves, but the fact that the world is still not stirring. United Nations Secretary-General Antonio Guterres said that the report was a “damning indictment” of failed global leadership. Perhaps, more significant is his statement that the “world’s biggest polluters are guilty of arson of our only home”.

One of the reasons why global action on climate change has been slow and inadequate is because it is subconsciously viewed as a Third World problem. The authors of the latest study said much of Africa, parts of Central and South America and South Asia are the “hot spots” which stand to be the worst affected by global warming.

The rich countries also seem to believe that developing economies such as India and China are contributing the most to the rise of use of fossil fuels, which is true but ignores the fact that in their present state of development they do not have much of an alternative. The rich nations nevertheless feel the developing world is not doing enough and feel it is unfair that they should pay a larger share of the costs of combating climate change. So, while the rich won’t foot the bill, the poorer countries do not have the resources to address both climate change and economic development.

Worse, while the developed world asks the emerging economies to tighten their belts and stop burning fossil fuels, they themselves continue to build new projects using these very same fuels. This prompted the UN Secretary-General to appeal to all G-20 governments, who have agreed to stop funding coal abroad, to do the “same at home and dismantle their coal fleets. Those in the private sector still financing coal must be held to account. Oil and gas giants -- and their underwriters -- are also on notice... OECD countries must phase out coal by 2030, and all others by 2040”.

Another reason for the inadequate response on climate change in the developing world is the esoteric nature of the problem. The urgency of climate change appears to be beyond the comprehension of the masses in developing countries like India, where there are more pressing issues such as unemployment and poverty.

Similarly, the dangers of rising sea levels might not be difficult to explain but the causality is. Moreover, how can people living a miserable existence be convinced to consume less? Equally difficult is expecting the rising middle classes in these nations to aspire for less and cut down on consumption.

Preaching the global warming message has therefore not been a political priority in poorer, underdeveloped parts of the world, unlike in the developed world where environmental awareness levels are generally higher. Politicians in the developing world have consequently rarely tried to sensitise their people about the link between rising populations, increased demand for resources and environmental degradation.

India is in a particularly hard spot according to the latest study, and may experience plummeting foodgrain production, unendurable hot-humid conditions, severe water scarcity and rising disease. The report estimates that India could face a 92 per cent loss of gross domestic product (GDP) by the end of the century if global warming continues at the present rate.

The UN chief’s fervent appeal could not be more relevant: “Now is the time to turn rage into action. Every fraction of a degree matters. Every voice can make a difference. And every second counts.” But will world leaders actually pull out their wallets to pay for the required changes? Will Third World politicians start talking about climate change? Or will humanity pray for a modern-day Manu to steer it through the approaching floods?