As perceptions supersede reality in how international affairs are played today, Ukraine has, as predicted, led to a huge propaganda campaign 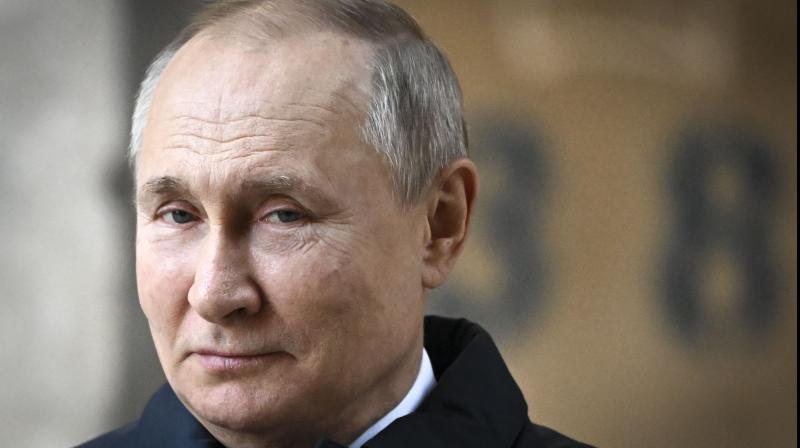 Americans learnt the limits to their power from Vietnam to Afghanistan and umpteen wars in between. That lesson the Russians are learning in Ukraine now. A little optical illusion is involved here. Ostensibly, Ukrainian nationalism is retarding Russian progress but this obscures the massive support in weapons and cash from the United States and Britain. President Vladimir Putin is being hammered by the biggest propaganda campaign by the Western media. The big war is, in fact, being fought by the media.

The November 2004 Orange Revolution comprised many Western TV channels focused on the Kyiv maidan. The images created an illusion of a nationwide uprising. This time the cameras are all over Ukraine. The cheerleaders in Washington, London, and Brussels are egging on President Volodymyr Zelenskyy, along with his cohorts, with clandestine advice and weapon tossed, all geared to blackball Mr Putin globally. By cheering this gory sport from the outside, Europe is boosting Ukrainian nationalism, of course, but also paving the way for millions of Ukrainians headed for Europe as refugees, but who will settle there. Social tensions between “white” and “non-white” immigrants in Europe is the story for the day after.

For clarity, let’s start from the beginning. The moment I saw BBC’s Lyse Doucet in Kyiv, before Russia’s invasion, my mind made the strangest connection with Corbett Park. The mahout hushes everyone on the howdah, puts his fingers on his lips and whispers, “call ho rahi hai”, which means monkeys on the highest branches are warning the jungle that a tiger is on the prowl. This is the surest signal that a tiger might be sighted. As soon as I saw Doucet, I knew the “action” would begin.

My experience of post-Soviet wars beginning with Desert Storm 1991 has followed a pattern: the rolling of war drums in the media was no guarantee military action would begin until Lyse Doucet, Wolf Blitzer, Christiane Amanpour, Nick Robertson, etc appeared on the scene. They appeared in Afghanistan, Iraq, any war involving Israel, Lebanon, Bosnia… always thoroughly briefed by military intelligence. Fireworks were guaranteed.

In fact, all post-Soviet wars, mostly Western, were custom-made for TV. In the sole superpower moment, these wars were an amplification of the Anglo-American dominance. This became clear in Desert Storm: There were separate briefings for US and British journalists. Europeans, indeed all others, twiddled their thumbs on the periphery.

French President Francois Mitterrand was reluctant, till the last minute, to join the “coalition of the willing” drummed up by Margaret Thatcher the senior President George Bush. He sensed one of its purposes was to retain the Anglo-Saxon grip on global power. Redistribution of power, with a reunified Germany knocking at the door, looked imminent. There were questions about the need for Nato, now the Soviet Union was gone.

Desert Storm gave birth to the new information order, with the global media at its pinnacle, one that was to come into play even in Ukraine. From the terrace of Al Rasheed Hotel, CNN’s Peter Arnett brought a war live into our drawing rooms, for the first time in history. This new power was put to considerable use in all the post-9/11 wars.

As perceptions supersede reality in how international affairs are played today, Ukraine has, as predicted, led to a huge propaganda campaign. The Western media has gone full throttle to demonise Mr Putin. He will be painted in the same lurid colours as Saddam Hussain — Hitler, thug, Satan, brute, gangster, whose oligarchs have to be emasculated.

The right-wing in the US Senate says a lot of irresponsible things which newspapers like the New York Times play down. That’s why columnist Thomas L. Friedman quoting these senators when they talk of President Joe Biden’s “dementia” is unusual.

Otherwise, it’s an excellent column. The heading sums up the situation succinctly: “This is Putin’s War. But America and Nato Aren’t Innocent Bystanders.” Friedman ferrets out a priceless interview with one of the finest minds on strategy and foreign policy, George Kennan. These observations were made by Kennan in 1998 just when the Senate ratified Nato’s expansion eastward in violation of promises made to Russia.

“I think it’s the beginning of a new Cold War. I think the Russians will gradually react quite adversely and it will affect their policies. I think it is a tragic mistake. There was no reason for this whatsoever. No one was threatening anybody else. This expansion would make the founding fathers of this country turn over in their graves.

“What bothers me is how superficial and ill-informed the whole Senate debate was. I was particularly bothered by the references to Russia as a country dying to attack Western Europe.”

“Don’t people understand? Our differences in the Cold War were with the Soviet Communist regime. And now we are turning our backs on the very people who mounted the greatest bloodless revolution in history to remove that Soviet regime. Russia’s democracy is as far advanced, if not farther, as any of these countries we’ve just signed up to defend from Russia. Of course, there’s going to be a bad reaction from Russia, and then [Nato expanders] will say that we always told you that is how the Russians are… but this is just wrong.” How prescient Kennan was.

In normal times, Donald Trump’s ringing applause for Vladimir Putin’s “genius” in the way the Russian strongman handled the crisis would be dismissed as a rant by an irresponsible politician. At the moment Mr Trump’s ratings are rising just as Mr Biden’s are diminishing. Mr Trump cannot be ignored.