Zulfikar had left behind a legacy of lost opportunities

There can be little doubt that the manner in which the PPP approached the 1977 election was profoundly problematic. 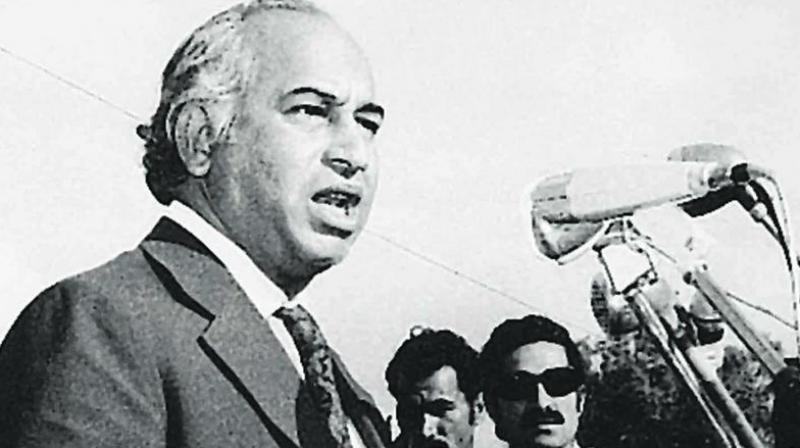 BELL bottoms were in vogue, and many young men tended to wear their hair long, at the beginning of Pakistan’s first experiment with popular — and arguably populist — democracy.

In the dying days of 1971, following the fall of Dhaka, the military high command had summoned Zulfikar Ali Bhutto home from New York, where he had been dramatically representing the nation at the United Nations as its interim foreign minister, and installed him as president and chief martial law administrator.

It was a new start for a seemingly very different Pakistan from the one that had existed before. Notwithstanding the bloodbath that had sealed the nation’s fate as an entity with two distant and disparate wings, it was possible to hope that the enthusiasm that had driven the grassroots rebellion of 1968-69 would at last bear fruit.

Less than six years later, though, the same forces that had thwarted the initial prospect of democracy with ruthless killings decided that the experiment was out of control and must be halted. In due course it was determined that it wasn’t enough to dethrone the country’s first popularly elected prime minister. Any prospect of his return to power had to be written off in absolute terms.

Thus it was that 40 years ago tonight Bhutto was carted off from his death cell in Rawalpindi to the gallows, and life was decisively and irrevocably snuffed out of him. His wife and elder daughter were denied the opportunity to attend his burial.

Many among those of us who lived through those times may not clearly recall the trauma — exacerbated by the rejoicing in some quarters — but it lingers on, at least subconsciously.

For the Bhuttos there were many more tragedies to follow. Its ill-fortune is sometimes compared to a Shakespearean tragedy, but even the Bard might have restrained himself from choosing such a bleak end for so many members of a single family. And one can only wonder how ZAB himself might have reappraised his political career had he even an inkling of what lay ahead for three quarters of his progeny.

He could not, of course, possibly have known any of this as a young man insinuating himself into the portals of power under Iskander Mirza, then shifting his loyalty to Pakistan’s first military dictator, Ayub Khan, and egging him on towards a pointless war with India.

Soon afterwards he reinvented himself as the leading figure in the resistance against the Ayub dictatorship, in the process attracting a considerable proportion of progressive forces, young and old, towards the Pakistan People’s Party he formed in 1967.

Within a decade, most of the left-wing party stalwarts had been sidelined, expelled, in some cases imprisoned, or drifted away from the PPP, replaced in many cases by the kind of feudals who sense which way the wind is blowing before they pledge their allegiance, and whose loyalty is inevitably ephemeral. By 1977, even the mild-mannered Dr Mubashir Hasan, in whose Lahore house the PPP had been founded, had dissociated himself from the ruling clique.

Sycophancy had undoubtedly played a key role in ZAB’s elevation from a clearly clever and charming nonentity to a prominent political figure. Despite that experience, he tended to prefer sycophants to those who might critique his wayward tendencies or wackier policies. It turned out to be a fatal flaw in the case of the seemingly dim-witted man he elevated to the post of armed forces chief.

There can be little doubt that the manner in which the PPP approached the 1977 election was profoundly problematic. And the irony is that it would, in most estimates, have easily acquired a safe parliamentary majority without resorting to the kind of shenanigans it did. The government’s response to the protests that followed was appallingly misguided, as were its concessions to the Islamists who tended to dominate the hastily cobbled-together Pakistan National Alliance.

Nonetheless, an agreement of sorts was eventually hammered out with the opposition. Before it could be announced, Ziaul Haq made his move. In the end, the Federal Security Force, the personal militia that Bhutto had injudiciously set up, proved worse than useless — it helped pave his path to the gallows.

The early years of the Bhutto regime were replete with opportunities that were repeatedly squandered, not least the chance to confine the army forces to the barracks. Long before ZAB experimented with martial law in key cities in 1977, he opened up a free-fire range for the military in Balochistan. In a sense, his rule (and, broadly speaking, Pakistan in general) never quite recovered from that monumental folly.

The PPP, still feudal to its core, occasionally dredged up the “roti, kapra aur makan” slogan. But it survives chiefly as a testament to an era when it seemed remotely possible. And as a reminder of a tragically lost leader.