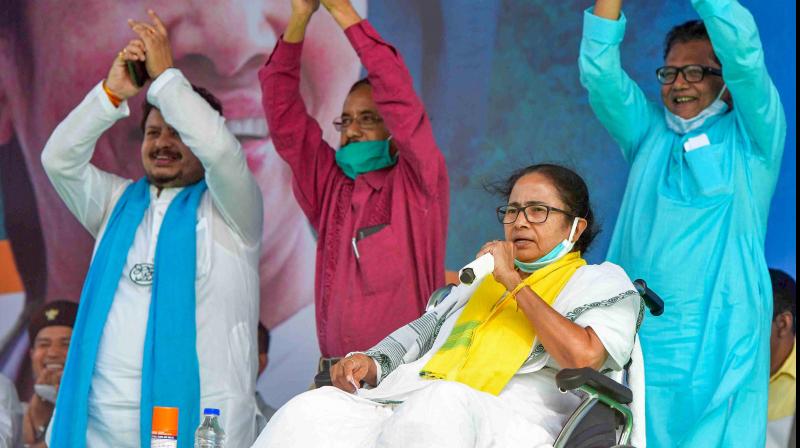 When Didi needs funds, she doesn’t waste a moment on these fine people — she goes straight to those who have the requisite lolly — the Marwaris of Kolkata. (PTI)

As I key this in on April Fool’s Day, I find I have completely run out of jokes! Even those crude Covid ones. There’s nothing “hahaha … HOHOHO” out there, and even our smartest, wittiest stand-up comics are struggling to come up with quips that make us laugh about the absurdity of it all. Black humour? I’ll take it! Black, purple or polka dotted — who cares? I’m up for a giggle — I mean, watching the West Bengal polls, would have been amusing had it not been this ugly. I am sick to death of Didi’s dadagiri -- and the shabby tactics adopted by the BJP to counter her! At the moment Didi is winning the Big Bully race! This is a bit too rich, given that Amit Shah is India’s biggest Dada … but cracking West Bengal is not all that easy, Amitbhai. Analysts can trot out all the numbers, charts and graphs at their disposal. Foreign observers of Indian origin can roll into the various districts to get a feel of what they believe is the ground level reality. Most of these experts are wealthy, well-meaning public intellectuals doing their job and filing detailed reports that nobody understands. But West Bengal operates with a logic all its own that defies standard deconstruction. Only one thing can be said with a level of certainty — Bongs are for Bongs. Simple!

For a true blue Bengali, it is only other 100 per cent Bengalis who make the cut — everybody else falls into the “outsiders” classification. Being born Bengali is the biggest binder — no matter where the Bengali lives. Even those Bengalis who have been away from West Bengal most of their adult lives, identify passionately and exclusively with the Bengalis of their home state. They live Bong. Eat Bong. Think Bong.

At the moment, opinions on the outcome of the polls vastly vary, depending on which Bengali television channel is being watched. It is commonly agreed that the “elite” English channels are not giving the polls in West Bengal sufficient importance. Meaning, they are stupid enough to believe there is life beyond Bengal, and actually flash world news. The Suez Canal crisis over Hooghly hooliganism… It goes without saying, Bengalis do not watch Hindi channels, since Hindi is as good as a foreign language. This makes it a little difficult for those not blessed by Ma Kali to be born to Bengali parents (“please understand -- both parents have to be Bengali… we do not accept a concept called “half Bengali”!) to figure out the hyper sensitvities of voters. What are the actual dynamics dictating this fiery poll? It is not the economy — that’s for sure. For most Bengalis, the crucial issue is a matter of their Bong identity. Is it intact or getting eroded? You can promise the Bengali just about anything — food, jobs, security, prosperity, rice and fish for life, sandesh on a daily basis — it still won’t impress the Bong voter. Had all these basics mattered, West Bengal would not be where it is today — in such a monumental mess.

One has to understand the emotional quotient of the Bengali to figure out why self-punishment seems to hold such an appeal! There is no such creature as an “unemotional” Bengali! Anything can trigger off a dramatic and exaggerated outburst. Mamata Banerjee is the queen of histrionics — she knows exactly which buttons to press and when. Her timing is unbeatable and when she throws one of her infamous, mother of all public fits — wow! Playing to the galleries comes naturally to Didi — she revels in high decibel acts during which she attacks opponents using offensive, crass street language — the kind lapped up by her loyal constituency. Didi cares a flying eff for what the bhadralok intellectuals make of her low-level barbs. They can sniff and snort derisively for all she cares — she knows those lofty men and women are not her core supporters. She probably consoles herself at such rare moments of self-doubt, with the thought that they could not be Amit Shah/BJP fans either! Which may be about right!

The club “kaalture” in Kolkata is unique and specific — the members are mainly antiquated boxwallahs desperately hanging on to vestiges of the Raj, while sipping gimlets on the well-tended lawns. They have zero idea about the “other” reality. Till the shoe pinches, of course. So far, their pedicured toes have been spared. The reason being simple — these relics really don’t matter to any political party! For all their inflated egoes and self-importance, even Didi knows she doesn’t need to court this lot.

Besides, as the Next Gen figured ages ago, these old stodgy families who go on and on about “class” — may have their comical version of “class”, but no money! They’re broke! Most of them ran out of dosh two generations ago. When Didi needs funds, she doesn’t waste a moment on these fine people — she goes straight to those who have the requisite lolly — the Marwaris of Kolkata. They are a pretty canny lot, and far from “emotional”, not being fully Bong-Bong. They are willing to play footsie with whichever neta can further their business interests. They had no problems getting into bed with the Commies — and flourishing. So it will be in this election as well. God knows what Amit Shah has promised the fat cats. This is how it works in Gujjuland — and perhaps traditional Bongs don’t quite get it. Maar-peet, murders and threats, playing the communal card — all this is so passe. Didi can appease, appease, appease all she wants and say namaz in public five times a day to win over a large and influential Muslim votebank. But it is really the clandestine money deals, that have already been brokered (according to those who claim to be in the know!), which will be the significant game changers in this bloody battle. It’s all about “bijness” and “dhanda” — something the bhadralok Bong-Bongs have still to master. Till the results in May — just keep watching the khela!