Opinion   Columnists  03 May 2020  Farrukh Dhondy: Won’t Boris be on paternal leave after weeks off for coronavirus?
Opinion, Columnists

Farrukh Dhondy: Won’t Boris be on paternal leave after weeks off for coronavirus?

Boris is entitled to paternal leave of absence from his job 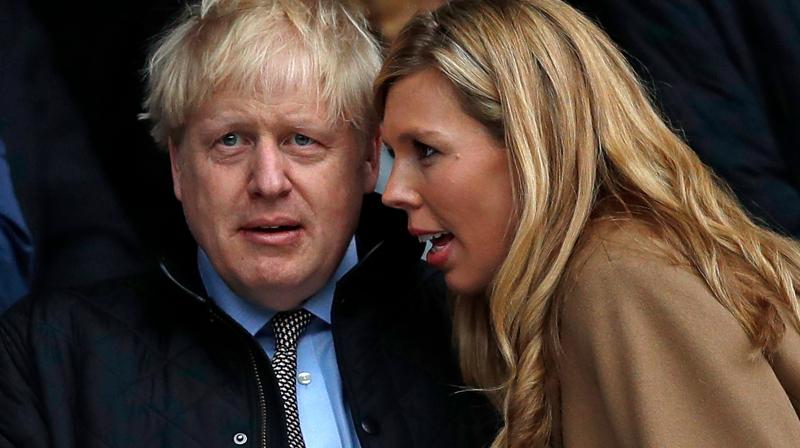 n this file photo taken on March 7, 2020 Britain's prime minister Boris Johnson (left) with his partner Carrie Symonds attend the Six Nations international rugby union match between England and Wales at the Twickenham in west London. Boris Johnson and Carrie Symonds have named their son Wilfred Lawrie Nicholas Johnson in a tribute to their grandfathers and the doctors who helped save the prime minister's life. (AFP)

“The planet rotates,
Deliveries will surely
Come to her who waits!

Stop all this ‘missing’
This plague will take its time and
Then back to kissing….”

Two expressions the British have for rodents come to mind in today’s pandemic of economic, political, scientific and governmental crises. One of them is, “I smell a rat”. This metaphorically means that the person pronouncing it has become the sort of feline presence who can detect that something is wrong.

It could in our world of suspicious and egotistic bullshit peddlers, facilitated by the growth of communication technology, apply to the idiot conspiracy theorists who declare that the coronavirus was not set loose by people eating bats or other creatures in a Chinese market in Wuhan, but by the proliferation of 5G transmission masts and the satellites that support this internet-enhancing technology by creating a “field” in which coronaviruses can emerge from the dimension in which they live, to plague ours.

They smell a rat and the odour of irrationality — a word which contains the three letter “rat” — comes off my computer as I access this bubonic plague of self-promotion which prompts innocents to abandon the principle of science which asks for the mechanism of cause and effect. That 5G and the corona plague co-exist doesn’t mean that one caused or gave a boost to the other. Pornographic websites and malaria in Africa co-exist…

The second English rodentic expression is “rats abandon the sinking ship”. A very useful metaphor, or call it in stickler fashion, an allegory! I can see them as the flash upon the inner eye, jumping off the Titanic, only to die in freezing waters.

The metaphor several simple-minded British commentators choose for this coronavirus crisis is war. They blithely compare today’s situation, the deaths owing to Covid-19, the lockdown and the marshalling of the resources of the country to fight it to the Second World War. Inclined to see things through xenophobic lenses, they want to see it as fighting an external enemy. It’s not. As in every country it has invaded, the virus is an enemy within.

The more appropriate metaphor for Britain in this crisis is that of the Titanic. The economy is at a standstill, the chancellor Rishi Sunak has made promises which will keep businesses honourable and tax-dodging solvent and has also promised to give handouts to those without an income, though every report says that these are not yet forthcoming. His handouts will plunge the country into debts, which have not been known since the 1930s.

What Sunak and everyone else in government and even in the commentariat is keeping very quiet about, is the combined effect that this worldwide plague in combination with the decision to take Britain out of the European Union is going to have on the country.

The crisis and consequent lockdown are giving rise to the forces of nationalism, to the closing of borders and is going to seriously affect, for years to come, generous trading relations between countries. Already the USA and China are declaring sanctions against each other and those will affect most countries of the world adversely.

Britain and its opportunistic and finally reactionary government embraced Brexit in the hope that it could patch up the hole that would be left in its economy by leaving the EU, with new trade agreements, principally with Trump and the USA. These may not be forthcoming in any near future.

Now, gentle reader, if I were a conspiracy theorist, which I absolutely deny being — and in fact see myself as a great bullshit-theory-buster --- I might, using the idiomatic phrase with which I started this column, “smell a rat”. This, in the case of our jolly-hockey-sticks or raucous-rugby-ball (to coin a phrase) Prime Minister Boris Johnson, would be to wonder if in the time of very tough or impossible decisions he didn’t abandon ship. I mean, did he genuinely have Covid-19 symptoms and absent himself for weeks from taking public decisions in a time when no public decision would be popular and any logical one would be disastrous for the economy? BoJo allowed others to announce these decisions. Very convenient, that onset of the sickness. Was Boris really suffering from Covid-19 symptoms? Or has the nation been lied to and the truth is that with his lasting respect for Donald Trump’s great intellect, he injected himself with bleach and fell very ill?

And now that he’s back in business, having taken a convalescent break in the PM’s country residence of Chequers, he announces that his partner has this week given birth to a baby boy. The entitles Boris to what a previous Tory government legislated for, which is paternal leave of absence from his job.

Perhaps, gentle reader, I should abandon the obviously erroneous conspiratorial stance and say that I am sure Boris won’t avail himself of paternal leave and will get straight back into taking full command of the navigation of the Titanic — sorry, what I meant to say was the direction and dates of the lockdown and the government’s attempt to save lives, save the NHS from being overwhelmed and find ways of dodging the predictions for the economy of Brexit and the corona crisis.

On a lighter note, gentle reader, let it be known that when my daughter ordered a board game to perhaps occupy idle hours during the lockdown, some packs of cards and instructions arrived for a sort of Monopoly --- with all the text in Chinese. I didn’t examine these carefully but now wonder if in the Monopoly sequence Trafalgar Square has been replaced by Tiananmen Square and The Old Kent Road, near the starting point, is now called Wuhan?