The Gujarat model has been long exposed as bogus. There is light seen at the end of the tunnel 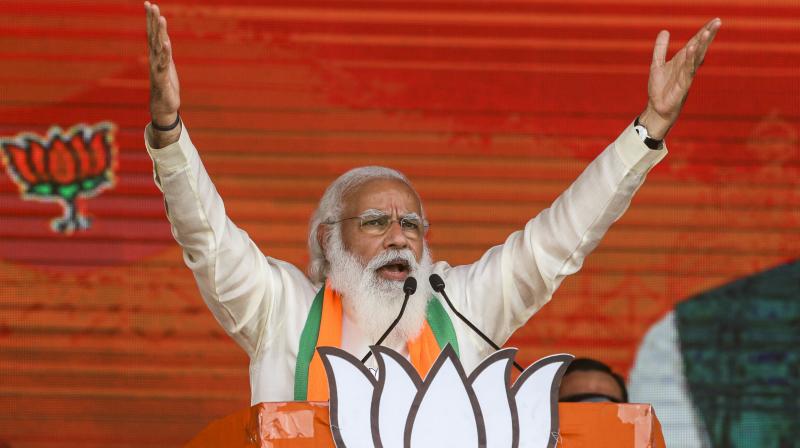 Prime Minister Modi’s inability to defend India against the second Covid-19 wave, and his inability to cajole the Chinese from withdrawing from areas they occupied in Ladakh now make him an easy target. (Photo: AP)

We are woefully short of hospital beds, oxygen, Remdesivir and Tocli-zumab, vaccines, ambulances and sadly even space in our crematoria. The growth and spread are expected to scale to almost a million a day. In two months, India has become the world’s basket case. Yet, on January 28 this year, speaking to the World Economic Forum in Davos, Prime Minister Narendra Modi showed a blissful and disturbing ignorance of the perfect storm looming. The committee of scientists monitoring the virus warned the PMO of the gathering storm. He was not interested. He was crowing about his perceived “achievement” of beating back the much-mutated “Chinese virus”. He was so wrong, and the country is paying a huge price. There is no Modi image of competence left.

The elections to the four states and Puducherry, which he was so focused on, have been his undoing. He began campaigning on February 5 and 7 in Assam and West Bengal. After that he addressed 20 more rallies in West Bengal and six more in Assam. He also addressed 10 rallies in Tamil Nadu, three in Kerala and one in Puducherry, in all around 40 giant rallies crisscrossing across in IAF Boeings. I wouldn’t even hazard the true cost to the exchequer, but I have heard it said the PM himself is liable to a charge of Rs 6 per air km. Other costs are borne by the PMO.  But the cost is not important. The time spent on huckstering is important. He lost almost a month campaigning, instead of managing the engulfing crisis. I always had a low opinion of his intellect, but even he could have surmised the risks posed to the nation by the renewed pandemic. Clearly, he factored winning West Bengal was more important and worth the cost. Mr Modi himself cheerfully paraphrased what Gopal Krishna Gokhale said almost 100 years ago: “What Bengal thinks today, India thinks tomorrow”!

West Bengal has unambiguously expressed what it is thinking. It has rejected Mr Modi and his message and campaign-style, lock, stock and barrel. A subservient Election Commission helpfully broke up West Bengal’s polls into eight phases starting March 27 and closing April 29. During this period the daily Covid-19 cases rose in West Bengal from 812 to 17,403. Breaking it into eight phases didn’t help the BJP either. It lost in every phase and got double digits only in four. West Bengal has a sizable Muslim electorate and Mr Modi didn’t mince words in targeting them by making it appear they were Mamata Banerjee’s personal votebank. He didn’t bother to even conceal what he thought of them. His electoral style touched a new low, even by his standards and most certainly by the standards expected of a PM, when he jibed her by catcalling “Didi-O-Didi”. Urban Bengal responded to this by defeating the BJP soundly in all urban constituencies. There is a message here. All over the country the BJP and RSS have strong urban bases, but urban and urbane Bengal administered a resounding slap to gutter politics. With no record to show, Mr Modi’s politics are nothing but that now.

There was no surprise in Assam. The BJP was returned by almost the same margin as in 2016, getting a majority with the AGP’s nine seats. The Congress lacked a visible local leadership who could match wits with the BJP’s Hemanta Biswa Sarma. Tamil Nadu was as expected. The two so-called national parties were clinging to crumbs thrown by the two so-called Dravidian parties. In Kerala, Pinrayi Vijayan showed why he’s India’s topmost and only surviving commissar. The DMK’s Stalin made no bones about what he thinks of Mr Modi’s Hindu and Hindi-centric politics. The Modi government used every means, including ED raids, to slow down Stalin. The ED even raided Stalin’s daughter.

So where does our politics go from here? One clear conclusion is that both the BJP and Congress were dealt severe blows. It’s interesting the BJP’s campaigns were entirely shouldered by Narendra Modi and Amit Shah. None of the other top BJP leaders even bothered to show up anywhere. What shouldn’t be missed is that the Raksha Mantri, a former BJP president, was the first from the party to congratulate Mamata Banerjee. In Assam, Mr Sarma’s supporters have gone public crediting the victory to their leader. Mr Sarma has already fired a shot across Sarbananda Sonowal’s bow, saying he was no longer interested in being just a minister in someone’s Cabinet. The numbers might work for him, as he needs just a dozen MLAs to cross over and give Assam a new government. Mr Sarma was a Congress satrap till Rahul Gandhi insulted him by playing with his dog rather than listening to him. Rahul will be all ears now.

Mamata Banerjee’s stunning victory puts her squarely on the centre stage of Opposition politics. Joining her there will be Lalu Prasad Yadav, released on bail by the Supreme Court despite the government’s strenuous objections. Tejashwi Yadav has shown he’s capable of leading a party when the RJD came so close to upstaging the BJP-JDU alliance in Bihar. Rajasthan’s Ashok Gehlot and Punjab’s Amarinder Singh have emerged as fairly independent Congress satraps. Uddhav Thackeray has shrugged off the Shiv Sena’s pariah status by providing Maharashtra with good leadership and a penchant for making politics the art of the possible. In Telangana, KCR has put the BJP in its place by a resounding win in Nagarjunasagar after its surprise showing in the Dubbaka and GHMC polls. YSRC scored a resounding win in Tirupati with the BJP candidate, a retired chief secretary, losing her deposit. The anti-BJP lineup now has seven chief ministers, excluding Naveen Patnaik. Seven CMs will mean the election and propaganda machines can be kept well-greased and the powder kegs dry and replenished. Prime Minister Modi’s inability to defend India against the second Covid-19 wave, and his inability to cajole the Chinese from withdrawing from areas they occupied in Ladakh now make him an easy target. The Gujarat model has been long exposed as bogus. There is light seen at the end of the tunnel.