The lockdown has proved to be challenging for all women — professional or homemakers , with all family at home, demanding more attention 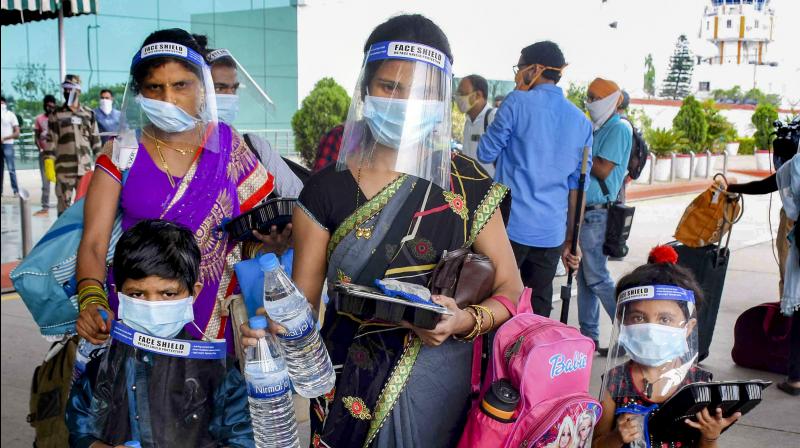 Women along with wearing face shields leave the Birsa Munda International Airport after they were brought by a special flight from Mumbai. PTI Photo

The proportion of men and women amongst Covid-19 patients in India suggest men are more vulnerable to this pandemic than women, but a reality check suggests women are the bigger sufferer. True, the count suggests there are more men compared to women amongst Covid-19 patients, but the story of women’s sufferings is beyond these numbers. The nature of sufferings women are facing is largely unheard, unseen and literally locked within four walls of the house.

Data indicated a significantly high proportion of men in India (76 per cent) falling prey to Covid-19 as compared to women (24 per cent). This should not surprise anyone as men are more likely to be working outdoors, increasing their risk of contact with disease. Evidence from a survey conducted by Lokniti-CSDS (2019) indicated only about a quarter (24 per cent) of Indian women are gainfully employed, which is much less compared to men, and so they are less likely to be the primary carrier of the virus into the household. However, this pandemic has exposed and exploited gender inequality prevailing in society far more than normal times.

The lockdown has proved to be extremely challenging for all women — professional or homemakers — with all family members present at home, demanding more care and attention compared to usual times, increasing their burden manifold. Traditional gender roles, which see women as “caregivers” and men as “breadwinners”, became more visible, pushing them further into domestication. Housewives had a challenging time, but even working women had a tough task with the new concept of “work from home”

Working-women are facing substantial additional household duties, apart from the fear of job loss and wage cuts, increasing their vulnerability in both personal and public spaces.

The descending economic graph is impacting everyone in the job market. However, women are more likely to face the wrench of loss of job and wage-cuts due to existing disparity at workplaces. According to the estimates from the Centre for Monitoring Indian Economy, more than 122 million Indians have lost their jobs in the month of April. Of them, three-fourth being small traders and wage labourers. Women would be at the receiving end as large numbers of them are in poorly paid jobs — of domestic helps, casual labourers and in small-scale industries devoid of job security and benefits. The Lokniti-CSDS survey (2017-18) also indicates that nearly two-thirds of women employed in unorganised or informal sectors belong to the lowest socio-economic classes. An economic slowdown consequential to such catastrophes leaves women employed in these sectors with additional wage cuts or no job.

Despite helpline numbers being advertised extensively by the government, making it possible to complain via mediums like WhatsApp, the situation remains dismal. One reason that can be accorded to this is a lack of privacy for women within their households. With all the members present at home during the lockdown, amid the fear of being overheard by abusive partners, there would hardly be any suitable time to call and submit the complaint.
Also, 70 per cent of Indians live in dwellings comprising fewer than two rooms, with more than half of them living in one-room dwellings. The internalisation of patriarchal norms and allowing men control or domination over women, however, remains the most common reason for women not being able to raise their voice or seek help even in case of dire need.

The network of Asha and Anganwadi workers needs to be fortified, beefing up their pays and funding, and using them, first, to monitor vulnerable households; second, in providing women with necessary hygiene-and-health-related products; third, in identifying women facing domestic abuse and, finally, in providing much-needed support and counselling. Apart from this, support through the existing welfare-based schemes should be increased, identifying all the needs and requirements of women.

The local governance system should be strengthened, as decentralisation serves as the most important key to understand problems and provide solutions at the grassroots level where they first emerge.

In these testing times when vulnerable groups tend to suffer far more than the others, a gender perspective in the fight against the deadly virus should help us understand and analyze its short-term and long-term threats to the society at large, and better prepare us for the times ahead.