In the absence of a real social protection mechanism in the cities, people have gone back to their villages 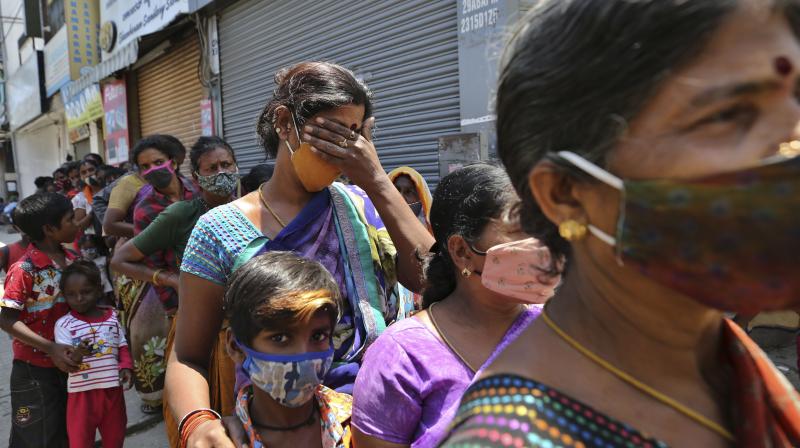 Women and children line up to receive free meals from a non-government organization during a lockdown imposed to curb the spread of the coronavirus in Bengaluru, Wednesday, June 2, 2021. (AP/Aijaz Rahi)

India’s prisoners offer a telling insight into the state of the country’s economy. In Uttar Pradesh, the country’s most populous state, 21 jail inmates have recently written to the authorities saying they don’t want parole. Their reason: staying in prisons is “safer and healthier” during the Covid-19 pandemic. They know that in the world outside, there won’t be free food nor regular health checkups and they will have to struggle for a living.

The signs of economic distress are everywhere. Even as the Centre and state governments continue to weigh in on the grim maths between lives and livelihoods, it is becoming obvious that social protection for our vulnerable makes for a compelling moral argument as well as an economic and social one.

Without it, neither the pandemic-battered economy nor the fractured will gain normality any time soon.

India has begun to take baby steps to emerge from the lockdowns that were triggered by the sharp spike in coronavirus cases in the “second wave”.

Currently, there are flickers of promise: the daily infections are falling in many places though Covid-19 deaths still remain high at around 3,000 every day. Worryingly, the virus continues to course through the countryside.

This week, manufacturing and construction work was allowed to resume in Delhi and some other areas, but with many roads remaining barricaded, transporting material is not easy and there is an acute shortage of labourers. Many have gone back home.

This time around, there was transport so there have been no long marches down national highways like last year, after the first nationwide lockdown. But clearly, many labourers who come to big cities in search of livelihoods have little faith in their employers or the State to look after them during lockdowns.

“In the past year, we have not put in solid social protection mechanisms for migrant workers or those working in the informal sector. There is the odd relief scheme for limited periods or cash transfer through Jan Dhan, but these have limited reach,” says Amit Basole, associate professor of economics at Azim Premji University, one of the key authors of a study, “The State of Working India 2021: One year of Covid-19”, brought out by the university.

In the absence of a real social protection mechanism in the cities, people have gone back to their villages. This should surprise no one. Neither should it come as a surprise that this will impact attempts to unlock the economy.

“Overnight, we may not be able to formalise all informal workers, but we need to definitely start putting in place a more solid social protection mechanism as a matter of immediate priority,” Prof. Basole stresses.

Why is not this a bigger issue? Perhaps the heart-breaking images of deaths, often without dignity, have something to do with it.

“The huge health crisis and graphic images of the dead have overshadowed the severe economic crisis across the country. Not only has the informal sector been rendered more precarious, many who earlier had salaried jobs are now being forced into odd jobs and errands just to survive as a result of the pandemic, lockdowns and various other restrictions,” says Prof. Basole,

He speaks movingly about a school bus driver he knows who is trying to make a living ferrying vegetable from wholesale markets to retail shops.

“But this is not a stable way of earning a living. Admittedly this is only anecdotal, but it’s not difficult to imagine many more such cases may be there.”

The report says mobility restrictions, such as those caused by lockdowns, predictably lead to income losses due to decreased economic activity. “We find that a 10 per cent decline in mobility was associated with a 7.5 per cent decline in income. This number is useful to keep in mind when estimating the impact of future lockdowns,” it cautions.

Predictably, the poor who lack cushions have been the worst-hit. Nearly half of formal salaried workers moved into informal work, either as self-employed (30%), casual wage (10%) or informal salaried (9%) workers, between late 2019 and late 2020.

Women have been affected more and households have tried to cope by cutting back on food intake, selling assets, and borrowing informally from friends, relatives, and moneylenders.

“A large majority of the population had access to PDS in 2020 (with enhanced monthly rations for eight months), and this played a critical role in averting the worst. But it’s possible some of the supplementary rations got diverted, initially at least, and significant minority of poor households had no access to PDS at all for lack of a ration card. Other relief measures such as NREGA and cash transfers also had a patchy coverage.”

Given the unpredictable trajectory of the virus, it’s hard to forecast when lockdowns may be reimposed. All the more reason to invest in a solid social protection mechanism to minimise the damage due to disruption.

“The State of Working India 2021” suggests some urgent policy measures. These include extending free rations under PDS beyond June, at least till the end of 2021, cash transfer of Rs 5,000 for three months to as many vulnerable households as can be reached with the existing digital infrastructure, including but not limited to Jan Dhan accounts, expansion of MGNREGA entitlement to 150 days, revising programme wages upwards to state minimum wages, expanding the programme budget to at least Rs 1.75 lakh crores, launching a pilot urban employment programme in the worst-hit districts, possibly focused on women workers, increasing the Central contribution in old-age pensions, automatically enrolling all MGNREGA workers who do construction work, as registered workers under the Building and Other Construction Workers (BoCW) Act so that they can access social security benefits and a Covid hardship allowance for Anganwadi/Asha workers of Rs 5,000 per month for six months.

All these measures together will cost money -- approximately Rs 5.5 lakh crores of additional spending and bring the total fiscal outlay on Covid relief to around 4.5 per cent of GDP over two years.

But what will be the cost of not having this large fiscal stimulus, given the magnitude of the distress?

As Dreze and Somanchi put it: “The Covid-19 crisis brings out once again that India needs a more reliable and comprehensive social security system.”