Farrukh Dhondy | In a crisis, is Boris pushing the ‘coconuts’ forward? 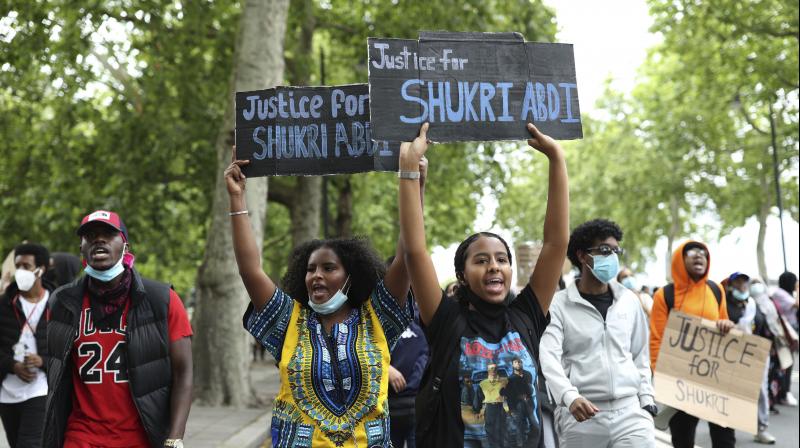 Protesters during a Justice for Shukri Abdi demonstration, to support the family in their pursuit of justice, in central London. AFP Photo

Race and colour are inseparable. Those who were labelled ‘coloured people’ insisted in the 1960s on being called ‘black’ — with the corollary that black was beautiful.

Then the acceptable description was ‘people of colour’, even though the militant Afro-Americans called themselves the Black Panther Party. They didn’t just mean the panther was black.

Other marks of colour, getting away from skin, are the colour of the eyes and the hair. Today’s significant universal movement against racism and its memorials has begun to demand that Jesus of Nazareth be portrayed as he probably was — not as a blonde and blue-eyed white man but as a brownish-skinned and black-haired Semite with dark eyes.

A million or more depictions in churches and even Renaissance paintings will have to be taken down or carefully painted over.

Which brings me, gentle reader, to the portraiture of Zarathustra, the prophet who invented monotheism. In every Zoroastrian household in which his portrait hangs, including the household of my grandparents in which I grew up, he was depicted by a German artist as a fair-skinned fellow with flowing brown hair and a beard.

This is obviously a European conceit which we hapless Parsis have adopted. Zarathustra, or ‘Jarthost’ as we Parsis call him, was an Afghan Persian and would have had features more like my second cousin twice removed (each time by the police) Rustom Immoralearningswalla, than like old Hans or Fritz Hoffman dressed in white robes and a turban.

Pointing this out to my devout Parsi community won’t compel the majority to take down this German portrayal, even if they are told that they are praying to Ahura Mazda in front of a portrait of a mythical Santa Claus.

The colour of icons is only problematic if those who use them as intermediaries for the worship of God are at all conscious of the racial divides that scour human history.

After the murder of George Floyd in the US and the movements of people black and white, in the US and now in the UK, to put the histories of the oppression of blacks by whites behind us, questions of colour enter politics, seriously and frivolously.

Interviewers on TV, bringing up the topic of the progress of black and brown people in Britain asked the health secretary Matt Hancock how many black and brown colleagues were in the present Cabinet. He fumbled the answer, saying he hadn’t counted.

Pranksters on Facebook and other devices got hold of or photo-shopped a picture of Prime Minister Boris Johnson surrounded by the black and Asian members of his cabinet — the likes of Rishi Sunak, Priti Patel, James Cleverly, etc. The pranksters labelled the photograph “Me and My Coconuts”. Now this phrase may mean nothing to people unfamiliar with rude British name-calling.

The word ‘coconut’ is used to abuse people who are deemed to be ‘brown outside and white inside’.

There are other metaphors, such as ‘Bounty Bar’, which is a chocolate case with white coconut filling inside.

The more serious attention to colour in the UK arises from the fact that black and Asian people seem to be more susceptible than the white population to the Covid-19 bug.

The more probable explanation is that they live in communities where the population density and the density of people per household is significantly greater than that of ‘white’ areas.

Another explanation is that black and Asian people are disproportionately represented in the workforces of hospitals and care homes which puts doctors, nurses, hospital cleaners, ambulance workers and carers at greater risk.

This is true of other professions, such as transport where bus drivers, for instance, are forced into contact with far more people than the stock-market-walla who conducts business on his phone and computer from his back garden or country villa.

This possible explanation brings to mind a childhood memory. In my grandfather’s house in Pune, all those decades ago, we had a cook called Hukam Ali.

Before entering the culinary services Hukums, as we called him, had been inducted into the British Indian army and taken in the late 1930s to Ethiopia to fight the war against the Italian invasion of Africa.

He would recount how regiments from Australia and other parts of the British empire were gathered there. He would say that when the Italian assault began a cry would inevitably go up: “saarey chillaaney laggey — ‘Kaaley koo aagey dhuklo’” — “They all began to shout push the blacks forward.” “Kya bathaaoon, apney bahoth log mar gaye…” —“What to say? Many of us died!”

Rather than any genetic explanation or lack of vitamins, the larger number of deaths among blacks and Asians through Covid may simply have a “kaaley-koo-aagey-dhuklo” origin.

Which brings me, gentle reader, to a rather unworthy thought – call it a conspiracy theory though I hate them. Kaaley koo aagey dhuklo.

It occurs to me that BoJo is very aware that with the certainty now of Britain leaving the European Union, with the US framing all manner of untenable conditions which put America first, the UK is going to be in deep economic trouble. National debt, unemployment, huge welfare bills, a bankrupt health service, rising crime and jail statistics and other disasters will follow.