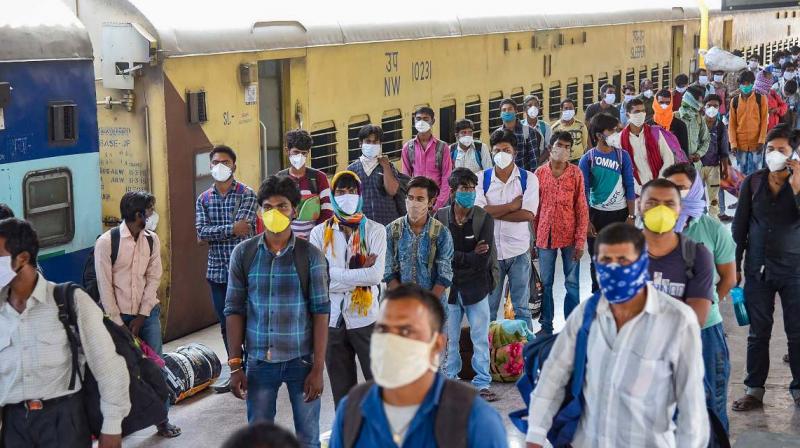 She has also provided gainful employment to migrant workers through the construction of 3,000 farm ponds, fish ponds and forest trenches to conserve water. (PTI Photo)

During the Covid pandemic, babus have been important players playing a critical role in framing and implementing the government’s response. Some babus, however, have managed to stand out from among the crowd. SpeakIn, Asia’s largest network of experts and thought leaders, recently recognised 10 distinguished IAS officers who have created impact and inspiration beyond the call of duty. Hari Chandana Dasari, a 2010-batch IAS officer of the Telangana cadre, worked her name into this exclusive list.

Known for her innovative approach and out of box thinking, Ms Dasari has successfully demonstrated how to turn adversity into opportunity. She successfully initiated several plastic recycling initiatives and welfare programs.
During the lockdown, Ms Dasari who is the collector and district magistrate of Narayanpet, saw a business opportunity and engaged 4,000 women in a mask-making endeavour. In just a year, the enterprise made a profit of Rs 50 lakh! She said she got new insights about recycling when she was in the UK for one year, and that they help her think on her feet when it comes to matters of environment and sustainable livelihood. She has also provided gainful employment to migrant workers through the construction of 3,000 farm ponds, fish ponds and forest trenches to conserve water.

DKB sometimes has been hyper-critical of babus, but some deserve a pat on the back.

We will profile a few babus like Ms Dasari in the forthcoming weeks. If you know of an officer whose story deserves a mention in this column, do write in and we will try and tell it.

There have been some murmurs in recent times about the eroding influence of the “heaven-born” in the current dispensation, with Prime Minister Narendra Modi increasingly appointing non-IAS officers to “traditional” IAS posts. But there are signs that the IAS lobby is still holding on to its turf, and even trying to expand it where it can.

Last week, a committee of secretaries headed by cabinet secretary Rajiv Gauba and including the principal secretary to the PM, the home secretary, revenue secretary and DoPT secretary screened 19 IRS officers for the appointment of three new members of the Central Board of Direct Taxes (CBDT). DKB has learnt that this is the first time that a panel of IAS officers has screened the IRS officers instead of the usual notification based on seniority by the Appointments Committee of the Cabinet (ACC). Usually, sources say, the CBDT chairman and members have been appointed on seniority basis in the IRS civil list with the approval of the ACC.

Not surprisingly, the IRS cadre officers are dismayed over the move, which they think is demeaning and yet another attempt by the IAS cadre to lord over the other services. They say that it should have been a routine decision but the reliance on the top bureaucracy in the PMO has created this situation where the IAS cadre now has oversight over the tax babus.

Whistleblower babus across the country have some similar themes in their career — a penchant for raising uncomfortable issues in administration, suffering frequent transfers, and the incessant ability to bring to light what would otherwise have remained hidden behind the curtains. In Madhya Pradesh, 2014-cadre IAS officer Lokesh Kumar Jangid is making waves by targeting the Shivraj Singh Chouhan government.

Mr Jangid recently let loose a torrent of tweets claiming that in 2020 the state civil services board (CSB) met 91 times to approve transfers of IAS officers before the completion of their minimum tenure. The minimum tenure for IAS, IPS and IFoS services at each posting is two years. Citing his own example, Mr Jangid said that in his career, he had been transferred nine times in 4.5 years! He claims that he had sought to raise the issue of premature transfers to highlight “its negative impact on administration”.

Mr Jangid has raised hackles earlier as well. Earlier in June, the young babu had alleged corruption against the district collector of Barwani district. The state government responded by issuing him a show-cause notice, but Mr Jangid has refuted the charges of unlawful action, indiscipline and denial to take orders given to him. While no action has been initiated against him so far, could this latest “provocation” prove to be the tipping point? Watch this space for updates.