Sunanda K. Datta-Ray | India must avoid getting entangled in US crusade

It was a warning that despite PM Modi’s right-wing bias, too close a relationship with the US is not in India’s long-term interest 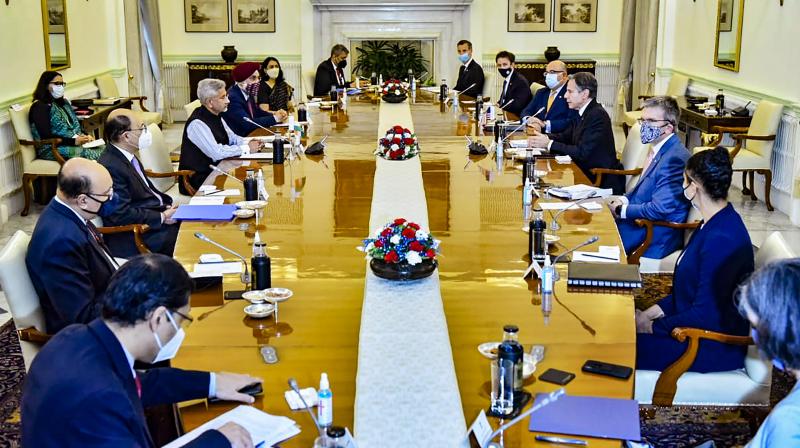 Indian effusiveness over the visit by Anthony Blinken, the American secretary of state, recalls a post-dinner encounter when the late Piloo Mody, the ebullient Swatantra Party MP, took the American consul-general in Kolkata to task for supporting dictatorial Pakistan against democratic India. Not carried away by idealism and moved only by hard realities, the consul-general merely made soothing noises all through Mody’s impassioned harangue.

It was a warning that despite Prime Minister Narendra Modi’s right-wing bias, too close a relationship with the United States is not in India’s long-term interest. For no matter who occupies the White House, the American definitions of autocracy and democracy are always subordinate to what Donald Trump called “America First”. The comment about the long-time Nicaraguan dictator Anastasio Somoza attributed to Franklin Delano Roosevelt — “Somoza may be a son of a bitch, but he’s our son of a bitch” — vividly illustrates the perils and pitfalls of superpower inconsistency that a junior ally of the United States must guard against.
The present crusade in support of democracy became public when President Joe Biden told a news conference after the Group of Seven leaders’ summit in Britain in June: “We’re in a contest, not with China per se, ... [but] with autocrats, autocratic governments around the world, as to whether or not democracies can compete with them in a rapidly changing 21st century … I think you’re gonna see just straightforward dealing with China.” He added: “As I’ve told Xi Jinping myself, I’m not looking for conflict. Where we cooperate, we’ll cooperate; where we disagree I’m going to state this frankly, and we are going to respond to actions that are inconsistent.”

Mr Biden would not have personalised this repeat of the rivalry that dominated and determined the US-USSR Cold War if today’s America did not visualise President Xi as some kind of a current “son of a bitch” in Roosevelt’s colourful terminology. Given the vicissitudes of politics, China’s leader might even be transformed one day into — again quoting Roosevelt — “our son of a bitch”. Where would that leave an India that is risking the lives of its soldiers in Ladakh’s Galwan Valley, and which objects that one of the key components of China’s Belt and Road Initiative — the China-Pakistan Economic Corridor — passes through a section of the old Jammu and Kashmir state that Pakistan invaded and occupies?

The US-China dispute is mainly over money and commodities. Taiwan, Uighur rights, Tibet, Hong Kong and the South China Sea are not central to their differences. The lives of Americans or the United States’ future are not affected. China’s challenge to India is far more existential. Apart from the Aksai Chin plateau through which the Chinese built a military road linking Tibet and Xinjiang, it concerns the 5,180 sq km Shaksgam Valley which Pakistan “ceded” to China. Territorial problems flared up again last week when the Chinese Customs seized a consignment of maps because Arunachal Pradesh, which China insists on calling “South Tibet”, was rightly depicted as an Indian state. Mr Blinken was playing politics in India. He met a senior Dalai Lama aide, Ngodup Dongchung, and in another context, Geshe Dorji Damdul, director of the Tibet House in New Delhi. Presumably, His Holiness himself is reserved for an “accidental” encounter when Mr Biden pays a state visit to India. That’s how these things are often stage-managed. The US President meets the Dalai Lama not to extend support to the Tibetan cause but to send a message to Beijing. The visit is usually “accidental” so that the message is not too harsh.

The hapless Tibetans, grateful for whatever diplomatic crumbs come their way, have no option but to play along. But India cannot be rushed into confronting China simply to suit Washington. Nor can India ignore legitimate grievances for Washington’s sake.

Admired for his mastery of realpolitik, Henry Kissinger epitomizes the opportunism that underlies such diplomacy. He pioneered détente with the Soviet Union to end the Cold War, then orchestrated the rapprochement with China to cut Moscow down to size. Against his shuttle diplomacy to end the Yom Kippur War and achieve the Paris Peace Accords to end the Vietnam War, must be balanced the US involvement in the 1973 Chilean coup, tacit support to Argentina’s junta for their “Dirty War”, and support for Pakistan during the bloodbath in Bangladesh in 1971. It can all be justified in terms of Mr Trump’s “America First” policy which has always mattered more than any commitment to democracy.

For obvious reasons, India cannot afford to follow the United States down those murky ways. Principle apart, they would not further India’s own fundamental interests. Yet, as the Covid-19 pandemic has again highlighted, India cannot do without American help either. India needs technological expertise, markets, weapons, training facilities, diplomatic support and — sadly — employment opportunities abroad. The United States, in turn, seeks Indian markets, raw materials, skills and, above all, India’s strategic geopolitical location commanding what it now chooses to call the Indo-Pacific region.

Perhaps the combination of needs on both sides does lend some justification to Atal Behari Vajpayee’s description of the two countries as “natural allies”. But it cannot be an uncritical alliance come what may. India cannot be dragged into a war in the South China Sea or coerced into boycotts that do not suit its needs. Nor can India abstain from pursuing its own national interests along the 3,450-km border where some 200,000 Indian troops are deployed. As for defending democracy worldwide, Chandra Shekhar had rightly declared in 1991, when refusing to participate in the US-led Operation Desert Storm to liberate Iraq, that a country which has difficulty defending its own borders has no business trying to defend other countries.

Prime Minister Narendra Modi’s first priority should be the economy, especially after the battering suffering because of the pandemic. Covid-19 has driven thousands of people into abject penury. Their welfare matters far more than gigantic statues or grandiose architecture to glorify New Delhi’s ruling establishment. India’s duty lies to Indians at home.