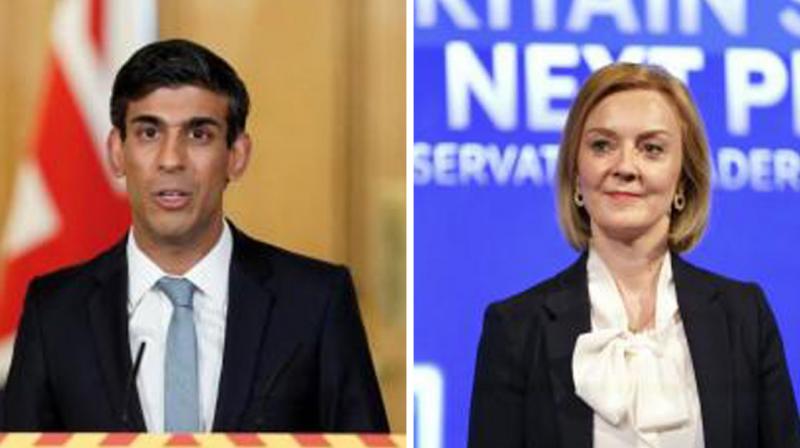 Boris Johnson’s Britain bristles with contradictions. It’s not only that two of his senior ministers are battling bitterly for his job while being careful not to say a word against him or his government’s policies. It’s no less bizarre that both vow to slam the door on immigrants without ever allowing a racist word to cross their lips.

Politicians in a more robust age had warned of “rivers of blood” flowing from race riots if immigration continued unchecked. Led by Mr Johnson, today’s mealy-mouthed leaders are trying to pass the buck to the cash-strapped African republic of Rwanda that became notorious for the massacre of a million people in three blood-soaked months of 1994. The Rwandan scheme, which has been condemned for trampling on human rights, also distracts attention from the paradox of its principal architects -- home secretary Priti Patel and the front-runner in the prime ministerial stakes, the phenomenally rich ethnic Punjabi former finance minister (chancellor of the exchequer) Rishi Sunak, son-in-law of Infosys founder N.R. Narayana Murthy -- being themselves the children of immigrants.

It must be explained that Britons are not choosing a new government at this juncture. The ruling Conservatives are well entrenched with a parliamentary majority. The next general election isn’t due till 2025. But an avalanche of resignations by prominent colleagues eroded Mr Johnson’s authority, paralysed his government and forced the 58-year-old Prime Minister to resign, announcing that he would remain in office only until party backbenchers chose his successor. Some suspect Mr Johnson might find a way of sneaking back into Number Ten.

Whether he does or not, the process of electing a new leader (to become Prime Minister) goes on.

Mr Sunak and foreign secretary Liz Truss, described as comfortably middle class although with nothing like the Sunak wealth, are the two contenders left after a series of votes by Conservative MPs. There are plenty of issues for them to champion. Britain’s National Health System has 6.5 million people waiting for treatment. Some 1.2 million patients need cancer tests.

Passport applications remain pending for 10 weeks. Wages are at an all-time low. The 40-year high 9.4 per cent inflation is threatening to rise to 11 per cent as the Ukraine war sends energy costs soaring. But asylum seekers -- more than ever before -- and illegal immigration (shorthand for Afro-Asian migration) are the main issues for Mr Sunak and Ms Truss.

It’s a reminder that the next round of selection is in the hands of some 160,000 Conservative Party members who must vote by September 2, the winner being announced on September 5. According to surveys, 31 per cent of the members support Mr Sunak, 49 per cent favouring Ms Truss, who enjoys 62 per cent support against the more charismatic Mr Sunak’s 38 per cent if the doubters are excluded.

Both support Mr Johnson’s unsympathetic Rwandan scheme. So does Ms Patel, who despite her Gujarati name and lineage -- perhaps because of them -- is the strongest opponent of inward migration. Although not in the prime ministerial race, her promise to “remain fully committed to delivering what the British public expect” suggests pandering to native-born Conservatives who secretly yearn for the now politically incorrect “Keep Britain White” lobby.

My middle-aged office accountant when I used to live in London was typical of this class. She and her husband were selling their suburban house which was too big for them but they would not advertise the sale because the Race Relations Act did not allow them to pick and choose a racially acceptable buyer.

“I couldn’t do that to the neighbours,” she explained. “We’ve known them for 20 years!” Some of that prejudice might still shape the thinking of some of those country Conservatives who Mr Sunak is wooing with his seemingly racist policies, threatening “foreigners who commit crimes in our country” with harsh measures like jail and deportation.

Andrew Mitchell, a former Conservative international development minister, says Mr Sunak’s aid cuts as chancellor “will be the cause of 100,000 preventable deaths, mainly among children”. Jeremy Hunt, the foreign secretary whom Mr Johnson defeated in the race to become Prime Minister, warned that aid cuts during the Covid-19 pandemic “when millions more will fall into extreme poverty will make not just them poorer, but us poorer in the eyes of the world”.

The irony is that the British are an immigrant nation. “Every drop of blood in my veins is German,” boasted King Edward VIII (later Duke of Windsor), who abdicated in 1936 as King-Emperor. No wonder the royal family invent the Windsor surname in 1917 to replace its real name of Saxe-Coburg-Gotha. An Italian, Renzo Piano, designed the 72-storey glass-clad architectural marvel of the Shard; the athlete Mo Farah was born Hussein Abdi Kahin in Somaliland; Lord Beaverbrook, the newspaper magnate, was Canadian. “This is London … a capital, a great big city where every kind of race has lived ever since the Romans,” wrote Colin MacInnes in Absolute Beginners.

By harping on migrants as a threat to English values, politicians like Ms Patel and Mr Sunak forget that London is one of migration’s greatest success stories. Some 9.5 million British citizens born outside the UK comprise about 14 per cent of the population. It’s nearly 40 per cent in the capital, making London, with more than 250 languages, a truly global city.

Mr Sunak hopes to cut across the hurdles of race and colour by showing voters how they, too, can be fabulously wealthy like him. “I believe in hard work, family and integrity. I am running as a Thatcherite, and I will govern as a Thatcherite. I believe in national sovereignty. Strong borders -- tight control of both legal and illegal immigration.” That’s a powerful appeal in a land that prizes its cultural identity and whose Institute of Fiscal Studies claims that inherited family wealth is fast becoming the most important determinant of how well-off a person will be later in life.

To that end, Mr Sunak has launched “BitQL”, a new cryptocurrency trading platform that, he says, can transform anyone into a millionaire within three to four months. The implication is that then they too will be able to afford the annual £45,936 that his own private school cost.

TAILPIECE: The joke, no doubt imported from India, is that if Rishi Sunak does become Prime Minister, Number 10 will also house Akshata Murthy, Sudha Murthy and Narayana Murthy, and thus qualify to be renamed as the “Teen Murthy House”.