Amitabha Bhattacharya
The writer is a retired IAS officer from the Andhra Pradesh cadre, who has also worked with UNDP and with the private sector.

Meanwhile, any public debate should address whether the CAA is against one religious group or favouring others. 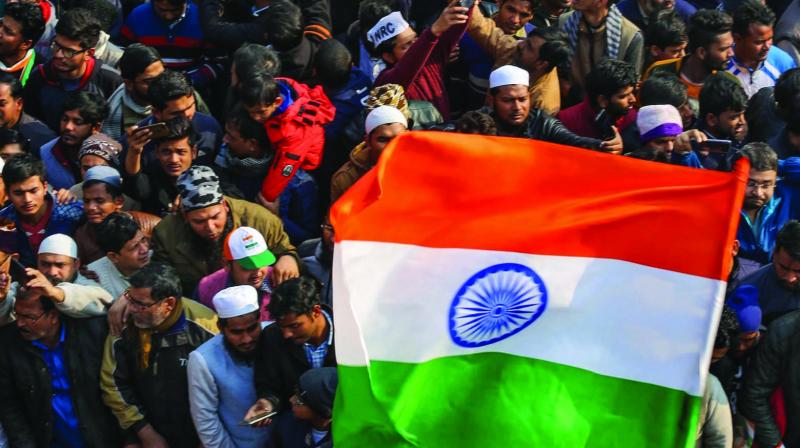 This brings us to the second issue, relating to the administrative capacity of the State. (Photo: PTI)

All government functionaries — whether they are ministers or officials — are paid by the taxpayers to serve the nation. Consequently, each of their actions, individual and collective, is liable to be questioned. Dissent being central to any form of democratic governance, such questioning is not only legitimate but most often desirable. Most government actions are but a continuation of earlier decisions and discourses, and are the outcome of deliberations between selected officials and elected public representatives. All major decisions at the Centre are taken by the council of ministers headed by the Prime Minister, and generally reflect the collective wisdom of the government — not that of the PM alone. Such executive actions are normally questioned in the legislature and frequently challenged in the courts of law. Thus, under normal circumstances, the system itself has built-in checks and balances. Unfortunately, a trust deficit has resulted in some leaders in power and those in the Opposition being on a conflicting course, with one side demonising the other as pushing a divisive agenda. This is causing a fear psychosis, which can very often be extremely counterproductive.

The recent spate of protests across the country over the Citizenship (Amendment) Act (CAA), as well as the proposed National Population Register (NPR) or the National Register of Citizens (NRC), establishes one thing for sure, that India’s democracy continues to be vibrant. It can be argued that the current discontent is the cumulative effect of mainly economic and certain social factors, aggravated by incidents of lynching and intemperate utterings by certain political leaders, but the fact remains that the core citizenship issues are not being discussed adequately on facts or merits, and that the agitations are accompanied with emotive considerations and often guided by political hues. Since the citizenship concerns are very complex and deeply grained in history, any discourse has to be grounded in reality — requiring a dispassionate analysis of the facts and the legal position, not merely on abstraction of moral or civilisational ideals. Since State actions comprise enacting of laws and framing of rules thereunder, budgeting of financial resources, deployment of manpower, timeline and such other concrete measures, a framework of informed debate with both sides willing to concede some ground, should perhaps include the following.

First, the CAA has been termed by critics as discriminatory and against secularism, not universal in outreach, unconstitutional and against India’s civilisational ethos. It would be prudent to wait for the Supreme Court to give its final verdict on these issues. Meanwhile, any public debate should address whether the CAA is against one religious group or favouring others. Is it in the spirit of affirmative action or not? Should the Government of India, dealing with citizenship, exercise reasonable restrictions to define certain religious groups, if there has been a historical case of persecution against them? While universalism in approach may be an ideal scenario, can the government be blamed for not following that ideal? What has been the international experience in this regard? How would the maintenance of status quo help resolve this contentious issue?

This brings us to the second issue, relating to the administrative capacity of the State. What is the approximate number of illegal migrants and how many of them are sought to be covered under the ambit of the CAA for the faster grant of citizenship? Has there been any official estimate? If so, can that be published for the people to understand the magnitude of the exercise? In the absence of any data, and of the basis of arriving at such data, how would the cost, complexities and implications of the nationwide undertaking be assessed?

The third issue is about the process involved and the documentation needed. What has been the experience of conducting the NRC in Assam? What are the lessons learnt? Should the CAA be further amended and how are the rules to be framed thereunder? What modifications of rules and processes are needed to make the exercise meaningful, compassionate and non-threatening? Instead of making blanket demands for the abolition of everything, can there be constructive suggestions about the amendments that may be needed, on the basis of evidence-based reasoning? Between the rigid stances of the pro-changers and the no-changers, is there any space for a more nuanced middle path?

The fourth issue relates to the timing and phasing of this exercise. Is it the right time? Is the current disruption going to affect the nation’s growth prospects — and if so, how much? While the CAA makes clear the intentions of the government, should it be in a hurry to steamroll the process, having known well that administration or politics is the art of the possible? Those opposing the moves should also spell out a tangible course of action to tackle the problem. Do they want the process of accelerated citizenship to be abandoned permanently or extended universally? Under the circumstances, shouldn’t the government pause a little, take a deep breath, learn from past experience, involve all the stakeholders involved and then proceed?

Finally, certain state governments have planned to not cooperate in any way with the implementation of the CAA as also the NPR/NRC. Making a political noise is understandable in a charged atmosphere, but states seeking to defy a Central law, if validated by the Supreme Court, can set a dangerous trend. This is also against the spirit of cooperative federalism. Let each political party go straight to the people and explain the features of the CAA, word by word, and of the process thereafter, enabling each individual to take a considered view on the matter.

Knowing that hatred diminishes the persons who hate, demonising any political formation or even a class of people — and dividing and classifying them either as bhakts or anti-nationals — can only vitiate the atmosphere further. Worse, the entities so despised may even start behaving like them. Only informed and dispassionate debates, in an atmosphere free from violence and fear, can lead to a resolution.