Like all those who stage coups, the Tatmadaw says it will hold a 'free and fair general election' after the emergency ends 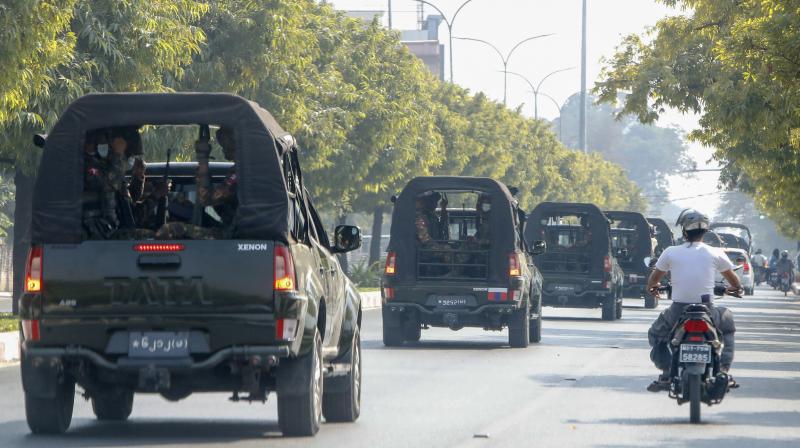 The pre-dawn coup in Myanmar on Monday recalls the worldwide outrage that Singapore’s patriarch Lee Kuan Yew caused in 1996 by questioning Daw Aung San Suu Kyi’s ability “to govern if ever she came to power”. He said he had told the Americans, who were pressing for democracy to be restored, that they should be around to pick up the broken pieces if the experiment collapsed.

It is tragically ironic 25 years later that the only way Ms Suu Kyi can prove her mettle may be another prolonged spell of imprisonment by the ruthless military junta. The sufferings of the 1.3 million persecuted Rohingyas will be much greater. But the worst victims of Monday’s coup are more than 55 million Myanmarese whose long delayed and hard-won democratic rights have again been brutally suppressed.

The 75-year-old Ms Suu Kyi has been accused of doing nothing to stop the rape, murder and possible genocide of Rohingyas. She was suspected of sharing the deep-seated prejudice of her Buddhist Mongolian compatriots against the darker skinned and largely Muslim, Bengali-speaking Rohingyas of Myanmar’s Rakhine province. Even under British rule, the old Burma was periodically ravaged by massacres of the immigrant Indian, mainly Tamil, community. While those immigrants were evicted at independence, the Rohingyas remained and today bear the brunt of Myanmar's racism.

Ms Suu Kyi has reason to be grateful to the Rohingyas who supported her 1988 democracy movement. The Rohingya-led National Democratic Party for Human Rights returned four members to Parliament in the 1990 election when her victorious National League for Democracy should have formed the government. But the military suppressed all opposition, placed Ms Suu Kyi under house arrest, banned the NDPR, and jailed and tortured its leaders. Myanmar does not now have a single Rohingya MP. The Rohingyas have no voting rights.

Politically, Ms Suu Kyi was blamed for acquiescing in the 2008 constitution which entitled the Tatmadaw — the military — to choose the vice-president and the home, defence and border affairs ministers, as well as control 25 per cent of parliamentary seats. But she probably knew the limits of her authority. Monday’s coup, the military’s declaration of another year-long state of emergency, and the appointment of the commander-in-chief, Gen. Min Aung Hlaing, as the national leader, confirmed that the military insists on obedience.

As the daughter of liberation hero, Gen. Aung San, who was assassinated on the eve of independence in 1948, she may be an iconic figure, and quite popular with Myanmar’s majority. But the military wanted her only to bestow legitimacy on their iron grip by letting the government turn a pretty face to the world.

Like all those who stage coups, the Tatmadaw says it will hold a “free and fair general election” after the emergency ends. When that will be and how free the exercise can be is anybody’s guess. But if the future is uncertain, there are no prizes for identifying the cause of the present crisis. The timing of this second suppression of civilian government — there were two other coups in 1962 and 1988 — is easily explained.

Myanmar’s Parliament was scheduled to meet on Monday to approve of the new government formed as a result of the general election held in November 2020. The Army was determined to prevent this because more than 70 per cent of voters defied Covid-19 and stringent pandemic restrictions to ensure a landslide victory for Ms Suu Kyi’s NLD party. They inflicted a resounding defeat on the military-supported Union Solidarity and Development Party, which has been clamouring ever since for just such action. The military has now obliged the USDP by accusing the country’s election commission of failing to address “huge irregularities” in the November election and is trying to justify its action by citing the need to preserve the “stability” of the state.

But it is difficult to understand the Tatmadaw’s long-term plans. If the emergency is for only a year, does it intend to restore truly civilian rule in February 2022? Since President Win Myint, the only person authorised under the constitution to declare a state of emergency, has also been detained, Monday morning’s coup becomes an illegal operation.

Moreover, Ms Suu Kyi’s prompt and instinctive response was to urge her supporters to “not accept this” event and to “protest against the coup”. In a letter written in preparation for her impending detention, she said the military’s actions had put the country back under dictatorship.

The armed forces ruled Myanmar until 2011 when democratic reforms spearheaded by Ms Suu Kyi ended military rule. She spent nearly 15 years in detention between 1989 and 2010 and was internationally hailed as a beacon of democracy and awarded the Nobel Peace Prize in 1991. She is now a global heroine, and Monday morning’s widely condemned coup was seen as much as an outrage against her as a national betrayal.

Nevertheless, Lee Kuan Yew had feared that only the military could save Myanmar from civil war. Not for him P.V. Narasimha Rao’s faith, expressed in Singapore to thunderous applause, that the answer to the problems of democracy was more, not less, democracy. He even saw Rao’s defeat in 1996 as retribution for such colossal naivete. Despite a low opinion of Myanmar’s generals, Lee saw the military as the only institution that could avoid civil war.

Perversely, that may be true even now. The military remains the main protagonist in any Myanmarese power struggle, the only one that can crush all other contenders.