Adityanath is plain bad news, and the praise heaped on him by the leader of the country is palpably false 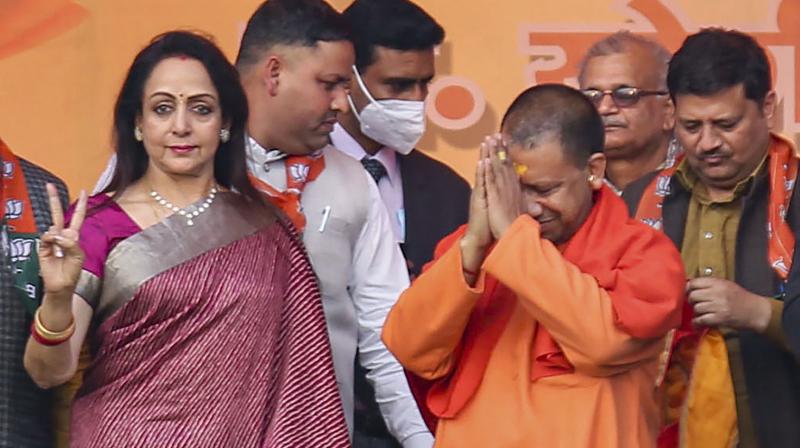 UP Chief Minister Yogi Adityanath with BJP MP Hema Malini during a public meeting in support of BJP's candidate Shrikant Sharma, ahead of the Uttar Pradesh Assembly elections, in Mathura, Wednesday, Feb. 2, 2022. (PTI)

Showering undeserved praise on an inept and arrogant politician who was on the police catalogue of bad characters — known in UP as “history-sheeters” — until he misused his powers and had his name struck off that list upon becoming CM, hardly seems wise.

Indeed, it could prove politically hazardous, with uncertainties being hinted at in the equation between the RSS and Yogi. Can this singe the PM? Much will depend on the election results, of course. But will the poll results themselves be shaped in some degree by the RSS’ outlook? This is a question that is said to be troubling many since the RSS ground-level organisation has a role to play, especially at election time.

Adityanath is plain bad news, and the praise heaped on him by the leader of the country is palpably false. Proof of this, if proof is needed, is that lately in about two dozen Assembly constituencies across UP, BJP MLAs and candidates visiting their constituency to campaign have been chased away by angry people.

Deputy CM Keshav Prasad Maurya, seen as BJP’s OBC stalwart, also did not escape this ignominy. If the CM has not met the same fate, it is likely because he is surrounded by high-grade security. It is noteworthy that just weeks before the election, prominent BJP leaders and ministers have defected to the Opposition although Mr Modi — and not Yogi — is helming the campaign.

A Prime Minister really ought to be more judicious with his words. Especially since the opinion polls tell us that Mr Modi remains the country’s most popular politician, he needs to distance himself from the likes of Yogi.

The lived experience of the people of Uttar Pradesh under the Yogi raj reminds them, especially at election time, of being deprived of the fruits of development, of the indignities they were made to suffer in their everyday life, and of unremitting violence, cruelty and brute repression, and of being unfairly jailed and being shot at (with citizens’ killings being routine), even as the administration and the police sometimes outpaced vigilante gangs in inflicting misery and pain on ordinary people.

The state machinery, regrettably even at high levels, has been seen to be guilty of acting as errand boys of the ruling establishment. This amounts to being co-opted into a vast authoritarian, caste-oriented, communal project that Yogi Adityanath has rolled out in UP in the past five years. The anger in the public is understandable.

Ayodhya, Kashi and Mathura, three of the most exalted pilgrimages of the Hindu faith, are in UP. The CM and the PM, frequently in tandem, have paid special attention to these on the campaign trail, performing dramatic, much-photographed, gestures in entreating the great gods to bless them (in preference to their opponents).

However, such an open appeal to religious sentiment for political purposes -- which is against election rules even if election authorities remain blind -- does not seem like swaying voters this time around. The big media has shied away from the story, but it is not hidden from the locals that a leading priest of the Kashi Vishwanath shrine in Varanasi, the PM’s parliamentary constituency, has evidently not held back in publicly dissecting the Prime Minister’s actions.

Mr Modi can hardly be unaware of Yogi’s deep unpopularity. Then, why does the PM appear so inextricably tied to him? The answer is not that the PM has to campaign for a BJP CM (which is expected), but that their fates have got interlinked through an unexpected play of circumstances. The net result of this is that if Yogi falls — or performs below par — Mr Modi’s prospects in 2024 can be impacted.

In 2019, the BJP had won 62 of UP’s 80 Lok Sabha seats. Without these, it does not have its own majority in Parliament. If the BJP takes a serious hit in the coming state polls, it will be assumed even in the ruling party’s calculations that Mr Modi’s supposed presumed invincibility could not see the party through. In short, the current PM could then be seen as a liability by his party two years in advance of the next Parliament election. A leader rendered vulnerable can trigger ambition, and inner-party competition, placing the RSS too in a quandary.

Another thing: should the BJP’s Assembly strength fall appreciably in UP, its Rajya Sabha strength will go down, rendering it incapable of getting major legislation through Parliament. And that can change the political mood in the country.

Given the ruling BJP’s stakes, the game in UP can get dirty and the Election Commission will need to be watchful. The Opposition will create a shindig; and the BJP may be expected to cut corners. There is an apprehension in Opposition circles that ballot stuffing through the possible manipulation of postal ballots is an area of concern. The EC’s recent record of poll management — not a flattering one — will be under greater scrutiny.

The PM has the option of distancing himself from Yogi. Even if BJP does poorly on account of Yogi’s malevolent rule, Mr Modi can keep his reputation in other states. But will he? For a politician, this is not an easy choice to make.

In July last year, Yogi had evidently been called to Delhi to be read the riot act since he was presiding over a very shabby show in Lucknow, and that had implications for the BJP’s prospects in 2024. But the party bosses developed cold feet.

As details of his meetings with the PM, the Union home minister and the BJP president did not come out in the reporting either in Lucknow or Delhi, it can only be surmised that the CM played hardball and had his way. He presumably threatened everyone that if he was sent packing, he could put up candidates of his own outfit, the Hindu Yuva Vahini, against official BJP nominees — something like what Amarinder Singh has done to the Congress in Punjab. Yogi is not from the RSS-BJP stable and is his own master. In the present circumstances, the RSS is not likely to be too favourably inclined toward him. Mr Modi too has likely had to swallow the bitter pill. A fascinating election lies ahead.