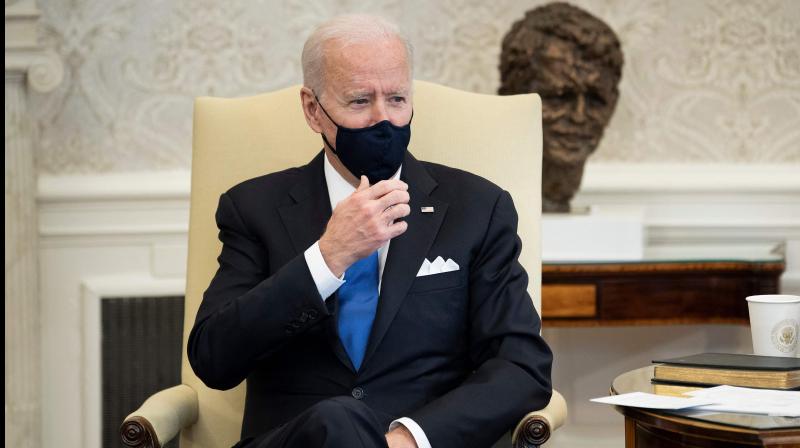 Mr Biden has also ordered a review of US arms sales to the Saudis and is reportedly considering a ban on all non-defensive purchases. (Brendan Smialowski / AFP)

By taking an expedient stand on Jamal Khashoggi’s brutal killing, US President Joe Biden may have thrown away the chance of drawing an ethical line between his administration and its predecessor. It looks almost as bad as allegations that India had sent naval commandos to capture beleaguered Princess Latifa of Dubai off the Goa coast and handed her over to the UAE in March 2018 to please one of the world’s richest heads of state.

Pragmatism isn’t always reconcilable with ethics, which also explained India’s long boycott of Israel. Moreover, as Morarji Desai found in 1977, he couldn’t easily distance India from the Soviet Union. Of course, the Democratic President, from whom Americans and the world expect so much, and who spent his first hours in the White House cancelling many of Donald Trump’s executive orders, might yet redeem himself. He has already taken the US back into the Paris climate agreement and is exploring ways of reviving the 2015 Iran nuclear deal. Mr Biden has also ordered a review of US arms sales to the Saudis and is reportedly considering a ban on all non-defensive purchases.

But surely the world’s only superpower claims a higher moral role than just organising the distribution of weapons and pocketing the profits. That was emphasised in 1990 as the USSR’s collapse prompted Richard Nixon to crow triumphantly from retirement that the time had come for America to reset its geopolitical compass. “We have a historic opportunity to change the world”, he wrote.

Mr Biden’s ambitions needn’t be that grandiose, but he does have an opportunity to correct some of the distortions and aberrations of the past four years, give even 74 million Trump supporters a sense of true pride in their country’s achievements, and inspire foreigners with confidence in Washington’s sense of fair play. Sadly, some of Mr Trump’s partnerships recalled the old story of an American President infamously claiming that a particularly unsavoury South American dictator “might be a son of a bitch, but he is our son of a bitch”. Americans were taken aback in 2018 when Mr Trump appeared to support Vladimir Putin over US intelligence claims on Russian interference in the 2016 presidential election. His applause for Turkish President Recep Tayyip Erdogan and Brazil’s Jair Bolsonaro and courtship of North Korea’s Kim Jong Un also looked like aligning the US with regimes that are the antithesis of values the US claims to promote.

At home, the deadly Charlottesville protest in 2017, the rise in violent right-wing extremism, and the viral spread of malevolent conspiracy theories that he encouraged were accompanied by mounting police brutality against blacks. The rise of groups like the Proud Boys, a violent street gang that gained new notoriety after Mr Trump acknowledged them during a pre-election debate with Mr Biden, was a particularly dangerous feature of those years.

It’s the close military and strategic relationship with Saudi Arabia that disturbs many Americans. When Mr Trump and Saudi King Salman signed a $350 billion arms deal in 2017, Tulsi Gabbard, Democratic congresswoman from Hawaii, warned: “Saudi Arabia is a country with a devastating record of human rights violations at home and abroad and has a long history of providing support to terrorist organisations that threaten the American people”. The sale was the reported handiwork of Mr Trump’s all-powerful son-in-law and senior adviser Jared Kushner, said to be close to the kingdom’s real ruler, Crown Prince Mohammed bin Salman, 35. Mr Kushner, who cultivated relationships with Saudi royals, personally contacted Lockheed Martin during the deal-making process.

Widely known as MBS, the crown prince has been accused by the Office of the Director of National Intelligence of ordering Khashoggi’s murder and the dismemberment of his body. “We assess Saudi Arabia’s crown prince… approved an operation in Istanbul, Turkey, to capture or kill Saudi journalist Jamal Khashoggi”, says the ODNI’s four-page report. Resident in the US, Khashoggi, who wrote for the Washington Post, was lured into the Saudi consulate in Istanbul and never seen again. When the Central Intelligence Agency levelled the same charge only a month later, Mr Trump blocked the report’s declassification and continued Washington’s strong ties with Riyadh. He refused to hold the prince publicly responsible for the crime even as the US government demanded that the perpetrators be punished.

To do the crown prince justice, he accepted Saudi Arabia’s overall responsibility for the murder of a dissident journalist who was his most vocal critic. But he denied any personal link although the ODNI says “the crown prince viewed Khashoggi as a threat to the kingdom and broadly supported using violent measures if necessary to silence him”. Antony Blinken, US secretary of state, says the US will not admit foreigners who threaten dissidents. To flesh out that oblique warning, Washington has banned 76 Saudi nationals implicated in Khashoggi’s killing.

Nevertheless, if action isn’t taken against the prime suspect, the drama might resemble Frederick Forsyth’s thriller The Cobra in which the US President sanctions the creation of an elaborate and expensive state-within-a-state machinery with the sole objective of destroying the cocaine industry. But when the resultant civil conflict threatens political careers, the US government abandons the cause. In the words of the man who was appointed to take on the cocaine underworld: “It has become corrupt and venal, weak and yet arrogant, dedicated to the obese and the stupid.”

Nobody can say that of Mr Biden’s administration. But he has yet to live up to the convictions that earned him a historic victory.