Opinion   Columnists  04 May 2019  Bengal violence signal of shift in its politics?
Opinion, Columnists

Bengal violence signal of shift in its politics?

West Bengal has a significant Muslim population (27 per cent) and there are a large number of constituencies where they are in sizeable numbers. 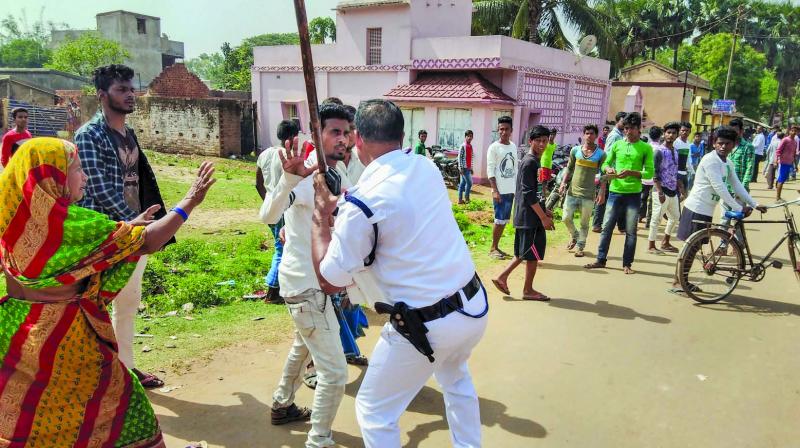 A policeman lathicharges a miscreant after a clash during the voting for the fourth phase of Lok Sabha elections in Durgapur, West Bengal, on Monday. (Photo: PTI)

There is enough evidence to suggest that  violence is a sure sign of a change waiting to happen. Various incidents of violence on the polling days during the different phases of the elections held so far in West Bengal are indicative of a political change which is waiting to happen. It seems the BJP is putting up a serious contest against the state’s ruling party, which seems to have taken the Trinamul Congress workers by surprise. Incidents of violence on polling day are the result of last-minute efforts by Trinamul workers to put up a stiff fight against the emerging BJP in several Lok Sabha seats. The incidents so far are indicative of some surprise, which may emerge from the state when the votes are counted on May 23. The contest in West Bengal is not only primarily between the TMC and the BJP, there is a “real” battle on between these two parties. The Congress and the Left parties have been reduced to being marginal players in this election, and are fighting essentially for the third and fourth places. The challenge the BJP has able to pose to the Trinamul Congress is mainly as anti-Mamata votes have got consolidated behind the BJP.

Though the BJP’s voteshare fell in the 2016 Assembly polls, the ongoing parliamentary election seems to have been a turning point in the state’s electoral politics. The convincing victory of Mamata Banerjee in the 2016 Assembly elections despite the Left parties and the Congress forming an alliance against her sent out a clear signal to anti-Mamata voters — that these two were no longer the real challengers to Mamata Banerjee in West Bengal. The message was loud and clear — it was only the BJP which could emerge as the challenger to Ms Banerjee. That is what led to the consolidation of the anti-Mamata forces behind the BJP after the 2016 elections.

The results of the panchayat elections in the state after the Assembly polls gave enough indication of the BJP emerging as a dominant political force in the state, at least replacing the Congress and the Left. During the local body elections, the BJP emerged in a major way. Of the 9,214 panchayat samitis for which elections were held, the TMC won 8,062 and the BJP emerged second, winning 769 seats, while the Congress with 133 and the CPI(M) with 110 seats came at third and fourth place respectively. Of the 49,636 gram panchayats, the TMC won 38,118 while the BJP managed to win 5,779, while the CPI(M) got 1,483 gram panchayats and the Congress won only 1,066. After the panchayat elections the writing on the wall was clear, but the Trinamul Congress supporters failed to read it on time.

The tough electoral battle the Trinamul Congress has faced from the BJP is only because the BJP managed to expand its support base enormously in the last couple of years. During the 2014 Lok Sabha polls, the BJP’s support base remained largely limited to urban constituencies, but the BJP has now managed to make inroads into rural West Bengal, keeping its support base intact among urban educated middle-class voters. The BJP emerged as an attraction among the young voters in the state, more so than the TMC.

West Bengal has a significant Muslim population (27 per cent) and there are a large number of constituencies where they are in sizeable numbers. While the BJP, with its promise of a National Register of Citizens in West Bengal, on the lines of Assam, has managed to attract some sections of the Hindu population, the Muslim votes may get divided between the Congress, Left and TMC. While the Congress is lying low, it has a presence in constituencies like Malda Uttar, Malda Dakshin, Jangipur and Baharampur, while the CPI(M) may still be strong in constituencies like Raiganj and Murshidabad. It is important to note that all these constituencies have sizeable Muslim populations. If the Congress and the Left manages to hold on to these constituencies, that would only be due to Muslim votes. This will mean a division of Muslim vote between three parties.

West Bengal has always seen a high turnout in Lok Sabha elections in recent decades. The 18 constituencies where people have already voted till the fourth phase have again witnessed a very high turnout, though there is hardly any change in polling percentages in these constituencies compared to 2014, except in Baharampur, where the figure went up by five per cent compared to 2014. Lok Sabha seats like Cooch Behar, Alipurduar, Jalpaiguri, Darjeeling, Raiganj and several others have seen exactly similar turnout as in 2014. A similar turnout in 2019 compared to 2014 may indicate that loyal supporters of different parties have turned out to vote so far. The key to the BJP’s success in West Bengal lies in the decline of the Congress and the Left. The bigger the decline of the Congress and the Left in West Bengal, the greater may be the gains for the BJP as the anti-Mamata votes get consolidated behind the BJP. We need to wait until May 23 to finally see what may have went wrong for some parties and what went in favour of some others.