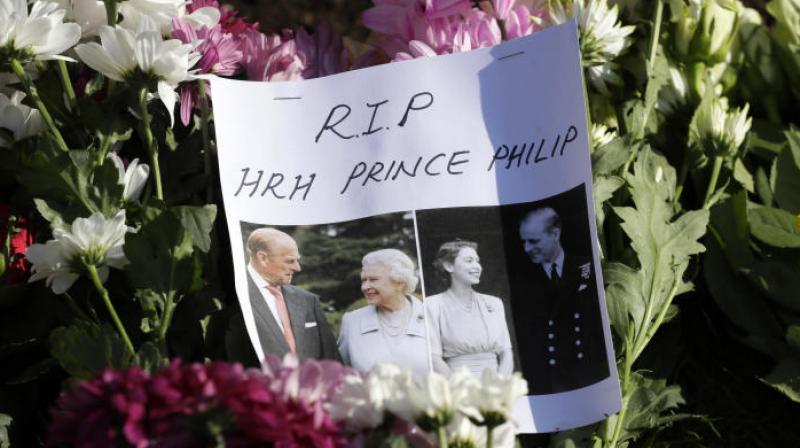 The Windsor Castle funeral, with the restrictions on gatherings imposed by the Covid lockdown, prevented any mass congregation of citizens, but still they came in their hundreds to profess their love for a man they had never met. (AP)

“How does a seed turn mud into trees?

Odours the animals, pollen the bees

The sun sets; birds dance on the breeze

The most famous remark of the late Princess Diana in her BBC interview with journalist Martin Bashir was: “Well, there were three of us in this marriage, so it was a bit crowded.”

It was not a revelation. Prince Charles had weeks before admitted in a publicised interview his relationship with Camilla Parker Bowles.

The remark was perceived by the media and the public as an insight into Diana’s suffering and seen as an assault on the morals and integrity of the royal family. It precipitated the Queen’s agreement that Charles file for a divorce.

At the time there was a lot of speculation about how Martin Bashir had persuaded Diana to give him that interview and launch the royal scandal. Last week, 25 years after the broadcast, the report of an inquiry into that question has been published. The report, compiled by Lord Dyson (not the muck-suction tycoon) was an exposure of Martin Bashir’s perfidious and possibly criminal means of obtaining the interview. Lord Dyson severely criticised the coverup of his actions by the BBC.

The report reveals that Bashir, a junior BBC journalist, got a colleague in the BBC to forge bank statements which “proved” that the press were paying Princess Diana’s staff to spy on her and give them details of her relationship with an Army officer called James Hewitt. Bashir took these forged bank statements to Earl Spencer, Diana’s brother, and persuaded him that Diana should tell all in an interview before the media went on to characterise her as the villain in the triangle — or quadrilateral?

In the interview, Diana admitted her relationship with Hewitt before it got exposed as scandalous. Perhaps she could have, quite justifiably, said: “Well, since there were three of us in this marriage, I assumed there could be a fourth!”

The BBC apparently knew about the forged documents and Martin Bashir’s devious means of obtaining the interview and covered it up. Bashir was not reprimanded or disciplined and was, years later, hired as the BBC’s head of religion.

Bashir protests that Diana was quite willing to give him an interview in any case and that his forged documents weren’t instrumental in helping persuade her to speak to him.

The 25-year-old episode has been brought to light again and became the focus of media attention displacing, however briefly, the reports from the world and especially India on the Covid devastation, the Israel-Hamas conflict and terrorist activity in Mozambique. Prince William gave an interview attacking the BBC and claiming the interview had led directly to his mother’s death.

The newspapers were in the main very happy to use the Dyson report to attack the BBC without making the connection between Diana’s death two years later in a speeding car which crashed in a Parisian tunnel as it was being relentlessly pursued by — no, not gremlins — the same newspaper paparazzi.

That the public is interested in the shenanigans and quarrels of the royal family is not surprising. There’s always something to report. The last three focuses on the royals were in themselves, even to a republican like myself, gentle reader, momentarily entertaining.

A year ago, Prince Andrew, the Queen’s favourite son, was interviewed on the BBC’s Newsnight programme about his involvement or friendship with the late Jacob Epstein, the paedophile billionaire who procured young girls for him.

And then there was the Prince Harry and Meghan Markle interview with Oprah Winfrey in the United States. It was seen as an assault on the prejudices and repressive controls within the royal family and caused an estrangement between Harry, his father and brother William.

The death and funeral of Prince Philip, Duke of Edinburgh, brought Prince Harry back briefly to England but the focus shifted from Philip’s deeds and gaffes to the froideur between Harry and William.

The Windsor Castle funeral, with the restrictions on gatherings imposed by the Covid lockdown, prevented any mass congregation of citizens, but still they came in their hundreds to profess their love for a man they had never met.

I completely understand, gentle reader, the admiration one may feel for, say, Muhammad Ali, Nelson Mandela or even one of the cricketers or Bollywood actors, male and female — though I suspect the last three have some affinity to the worship of deities. But love?

I, just like you, have various experiences covered by the word. Parental, both ways, romantic and even loving a favourite flower, food or wine… but for members of a privileged, parasitical and patronage-lending, mostly idle family?

It’s not that I feel Cromwellian in my republicanism. And I certainly don’t feel that a Parliament dominated by the likes of Boris Johnson and the freeport and deport Indian variants, Priti Clueless and Wishi Sunak, or the mendacious health secretary Matt Halfcock are doing a better job than if it were all left to Liz II.

My faith in parliamentary democracy has been deeply shaken through assessing the actions of elected leaders and parties of several nations in this our sad vale of oppressions. But the hope is that Prime Ministers are not permanent and that even in those countries the populace doesn’t love them like the tribal Brits just “love” their Queen.