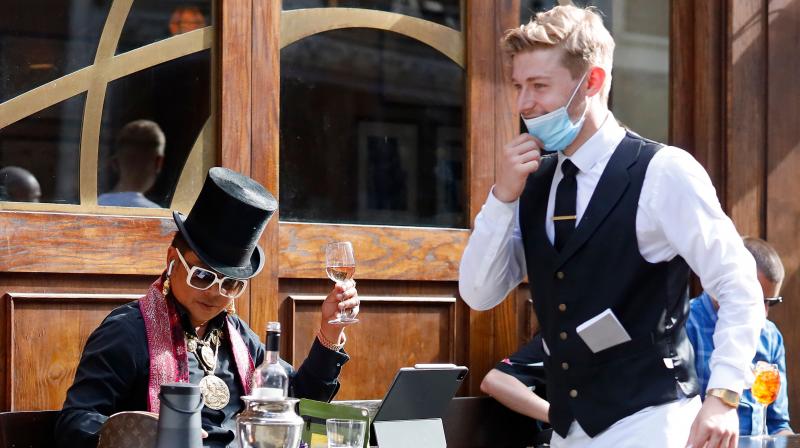 A waiter wearing a face mask or covering due to the COVID-19 pandemic, passes a customer drinking outside a restaurant in London. AFP Photo

Another scorching weekend, 100 F! And while we dither as a country between being locked down or being let out, pubs are full —especially those which can offer outside seating.

You don’t see much social distancing there nor on the beaches where people flock every warm weekend. Many are working from home, so office time is flexible — and what can one do when sunshine beckons ?

But now everything is changing, because Covid-19 is back. Leicester was the first city to be out under lockdown a fortnight back. Now the virus has spread to Manchester, East Lancashire and Yorkshire.

With Eid this weekend, there was a lot of inconvenience for Muslims as any meeting between more than two families indoors is banned under lockdown.

Before that, the rules of going out kept changing as well as for holidaying abroad. After an initial complacency till mid-March, and a tight lockdown till mid-July, things had begun to finally move forward. Both the Prime Minister, Boris Johnson and the Chancellor “Dishy” Rishi, wanted to restart the economy in a hurry.

Earlier last week, foreign travel to European destinations was allowed. Then Spain had a second wave of Covid-19.

Many who had landed in sunny Spain, including a UK Cabinet Minister, were told that upon return they face a fortnight ’s quarantine.

As the policies are now being made keeping in mind the capricious ways of the virus, the rest of the year is going to be tough, till the vaccine arrives.

Last Sunday, we had the first episode of A Suitable Boy, based on novelist Vikram Seth’s much loved book, and directed by Mira Nair. This is the first TV serial from the BBC with all Indian characters, who are not ( for a change ) caricatures or stereotypes. And not served with a dash of colonial masala, either.

Nor is this a story of the Raj like Jewel in the Crown with mixed nationalities. This is hundred percent desi. It looked beautiful and got five star reviews in the newspapers.
So India, of a distant past, should be part of our Sunday evenings for a while. Yes, the local Indians are being critical about it — as are Indians elsewhere too— but this is the BBC version of India, and it looks good and feels good.

Speaking of the BBC, it is sad to record the passing away of Kailash Nath Budhwar, the first Indian head of the BBC Hindi and Tamil service . He had heralded an important change — as before him the head of the Hindi service had invariably been White.

For many in the United Kingdom and listeners of the BBC Hindi Service he had been the voice of India, and will be missed.

Central London is deserted. But at the Trafalgar Square, there is a new presence. The fourth plinth has been reserved for bold and experimental sculpture which is given space for a while and then another one comes along. The latest is called The End is by Heather Phillipson.

It is a sculpture of whipped cream with a cherry on top. But it’s not all cheery as there is a fly climbing up the side and a small drone. Don’t laugh.

It is thirty feet high and weighs nine tons. The artist said that it symbolised something about to collapse, like the United Kingdom after Brexit. Previous sculptures have been equally adventurous or pretentious, depending on which side you are on.

One was a ‘thumbs up’. another was of Nelson’s famous ship Victory inside a bottle.

It was Ken Livingstone, while Mayor of London, who had the idea of opening up the empty plinth for installations or sculptures by young artists.

Well done Ken! Looking at it I am always reminded of the empty canopy near India Gate. After the removal of the statue of King George V, in 1968, it has remained empty.

Perhaps it too could be given over to modern Indian sculptors, displaying contemporary work.

Every time a new list comes out of people raised to Peerage, the House of Lords gets abused in the media as useless, waste of money and so on.

Boris has just announced his list and it is the usual mix of party political cronies—donors , retiring MPs, dissidents from the Opposition etc. But two names are noteworthy as friends of India.

Jo Johnson, an old friend who was posted in Delhi as a correspondent for Financial Times, then became an MP and Minister in the United Kingdom under successive Conservative governments. Jo had resigned on grounds of conscience because he could not agree with brother Boris’s Brexit policy.

Jo was helpful in setting up the Gandhi Statue in Parliament Square. The other is Nemat Talaat (Minouche) Shafik the Director of the London School of Economics (LSE).

She has set up Mahatma Gandhi Scholarship Fund for Indian students coming to LSE with a donation of £100,000 from the Gandhi Statue Memorial
Fund.