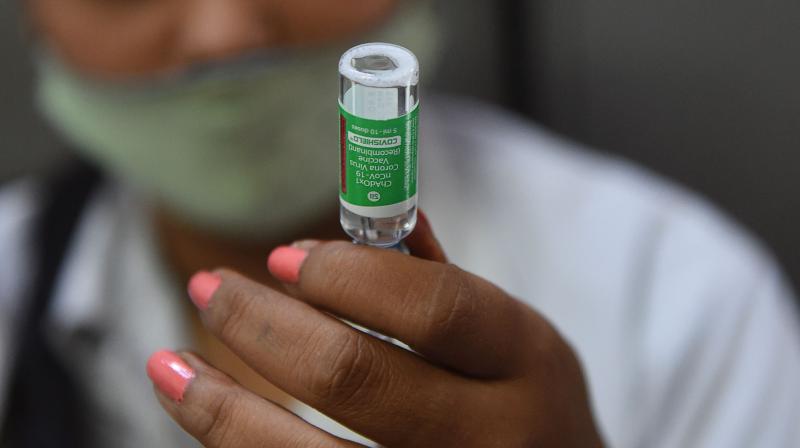 The ministry can say the states and UTs did not provide the number of administered vaccines. (AFP Photo)

Officials of the Union health and family welfare ministry in their regular media briefings dole out the doleful numbers of vaccines supplied and mention the number of vaccines administered only when they choose to. India’s new health minister Mansukh Mandaviya asserts that there’s no shortage of vaccines, and without saying so implies it’s the states and Union territories which are not making full use of the vaccines. And the numbers given out in the Press Information Bureau’s releases reveal a Kafkaesque twist in the tale of its own. On August 1, the PIB gave out the following figures -- Vaccines supplied: 49,49,89, 550; In pipeline: 8,04,220; Consumption: 46,70,26,662; Balance Available: 3,00,58,190. On August 2, the government figures are – Vaccines supplied: 49,6498,050; In pipeline: 9,84,610; Balance Available: 3,14,34,654.

The argument is that every day the Central government is supplying a certain number of vaccines, and the states and UTs don’t use all of them that day. They are to be used in the next few days. And those in the pipeline will increase the number of vaccines available. The supplies are thin, and the inventories are not assuring. The government doesn’t want to reveal the real situation. But it somehow seems to manage supplies, keeping them floating above the water as it were.

This leaves enough room to wonder whether the pace of vaccines administered has something to do with the thin supply line. The pace of administering the vaccines can be inferred from the fact that on May 1, the government press release says total vaccinations have crossed 15.66 crores, and on the day (May 1), 16 lakh vaccine doses were administered. The press release announces in bureaucratic grandiloquence: “The Government of India along with the States/UTs through a ‘Whole of Government’ approach has embarked on a five-point strategy for the prevention, containment and management of the Covid-19 pandemic in the country. Vaccine forms an integral component of the five-point strategy, including Test, Track, Treat and Covid Appropriate Behaviour.” And it also says: “The Liberalised and Accelerated Phase-3 Strategy of Covid-19 Vaccination has come into force today (May 1, 2021)”. On the day, 84,599 beneficiaries in the 18-44 age group were given the vaccine as they were made eligible on this day. However, in places such as Delhi, many vaccine centres were closed for the new two weeks because vaccine supplies were not available.
By June 1, the total number of vaccines administered reached 21.83 crores, and on July 1, “India’s Cumulative Covid Vaccination Coverage reached nearly 34 crores”, says the government press note. It notes the fact that on July 1, 38.17 lakh vaccine doses were administered, after “the phase of universalisation of Covid-19 vaccination commenced from 21st June”. We know that on June 21, 80 lakh vaccines dose were administered after Prime Minister Narendra Modi had announced that the Central government would buy 75 per cent of the vaccines from the manufacturers and distribute it to the states and UTs. On August 1, the total number those vaccinated seems to be around 46.7 crores because
the number is given under the head of “consumption”. So, in a month, about 12 crore people were vaccinated. The figures of those who received first doses, and those who got second doses, remains a tortuous detail. There is no explanation on why this is so. There are bound to be glitches and snags in a mass scale vaccination exercise like the one being carried out in India, but the government wants to make it appear that it is sailing smoothly with clockwork precision. If the vaccination programme was run super-efficiently, one would have marvelled, but the problem with the Central government is that it wants to give the impression that everything being run well when it is not. Then there is the juvenile claim that India has vaccinated more people than in the United States, but the US because of its population size had covered over half its population, but India is even to reach the one-third figure of its 1.3 billion population.

The government is barely managing its vaccine supplies and it seems to be in a precarious situation. The Serum Institute of India, the maker of Covishield; Bharat Biotech, the maker of Covaxin; and Dr Reddy’s Laboratories, the maker of Sputnik; are all supposed to deliver large numbers of their vaccines, and they have been paid beforehand to do so. The government does not want to share with the people whether the supply chain is firm enough. The government has also been desperately trying to negotiate with Pfizer, Moderna and Johnson and Johnson. But nothing came of it so far. The government is therefore forced to depend on domestic manufacturers. And even the ramped-up production targets of these domestic manufacturers don’t seem to be working. This is revealed in the “in the pipeline” figures. So far, the bluff has worked. But you cannot bluff your way through a health emergency. There is a conspiratorial silence about the production schedules of SII, Bharat Biotech and Dr Reddy’s Laboratories. This kind of secrecy is likely to explode in the face of the government.