Opinion   Columnists  04 Sep 2021  Anita Katyal | Will Baghel be in charge of UP polls instead of Priyanka?
Opinion, Columnists

Anita Katyal | Will Baghel be in charge of UP polls instead of Priyanka? 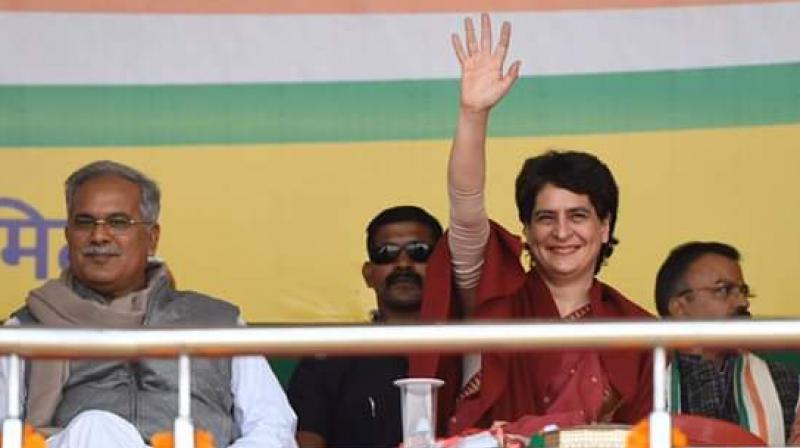 It was suggested to Chhattisgarh chief minister Bhupesh Baghel during these talks that he move to Delhi and take charge of Uttar Pradesh affairs as party general secretary. (Twitter)

The Congress is abuzz with speculation about plans to extricate party general secretary Priyanka Gandhi Vadra from the charge of Uttar Pradesh which she is currently handling. The party fears Priyanka’s credibility and reputation will take a hit as it is becoming increasingly clear that the Congress is unlikely to make a mark in next year’s Assembly elections. This will be seen as Priyanka’s failure and the party obviously wants to avoid such a situation. It is, therefore, no coincidence that she is no longer confined to Uttar Pradesh and has been involved in handling the crises in the party’s various state units in recent months.

Whether it was Rajasthan, Punjab and, more recently, Chhattisgarh, Priyanka was present during the discussions with the warring state leaders. Apparently, it was suggested to Chhattisgarh chief minister Bhupesh Baghel during these talks that he move to Delhi and take charge of Uttar Pradesh affairs as party general secretary. However, a clear picture will emerge in the coming weeks when the Uttar Pradesh poll campaign picks up speed. Congress insiders maintain it could be business-as-usual if the much-speculated alliance with the Samajwadi Party comes through, failing which Priyanka may slow down as far as Uttar Pradesh is concerned.

The Bharatiya Janata Party is putting its governors to good use for its political agenda both in the BJP and Opposition-ruled states. West Bengal governor Jagdeep Dhankhar played an active role in needling state chief minister Mamata Banerjee before and after the assembly polls, resulting in a regular war of words between the two. More recently, Rajasthan governor Kalraj Mishra was in Lucknow where he attended a meeting of the Vidvut Samaj (comprising members of the Brahmin community) in a clear bid to reach out to this caste segment with an eye on next year’s Assembly election. The Brahmins in Uttar Pradesh are upset with the Yogi government for giving preferential treatment to the Thakurs. While Kalraj Mishra was deployed in his home state, Maharashtra governor Bhagat Singh Koshiyari has undertaken several trips to poll-bound Uttarakhand, his home state.

Lobbying for the post of the next president of the Gujarat Pradesh Congress Committee is on in full swing. Among those who are making a pitch for this post is Hardik Patel, the rebel Patidar leader who joined the Congress in 2019 and was appointed working president in the state unit a year later. The young Patel leader is putting his case before senior party leaders, promising to consolidate the Patidar votes for the Congress.

However, he is not taking any chances because the old timers in the party are battling hard to deny him the coveted post as they feel their rightful claims may be overlooked in favour of a relative newcomer. Mr Patel is said to be in touch with the Aam Aadmi Party which is planning a serious foray into Gujarat after it made a surprise splash in the last local body elections.

Congress leaders have held a series of meetings to take a call on the role poll strategist Prashant Kishor can play if he joins the party. Several suggestions are on the table. The most feasible, so far, is to bring in Mr Kishor as party general secretary and give him charge of a new department titled election planning and strategy. However, senior party leaders have expressed their reservations about entrusting such key responsibilities to outsiders and non-political players. Mr Kishor may have had a successful run in other political parties like the Janata Dal (United), Trinamul Congress and DMK, but he did not fare too well in the Congress in the past. Mr Kishor was taken in to manage the party’s Uttar Pradesh campaign in the 2017 Assembly polls and it was at his prodding that the Congress sealed an alliance with the Samajwadi Party but this proved to be a disaster. Those resisting his entry to the Congress never fail to remind the leadership about his past record in the party.