Shreya Sen-Handley | Square up in Kabul, look forward in rage 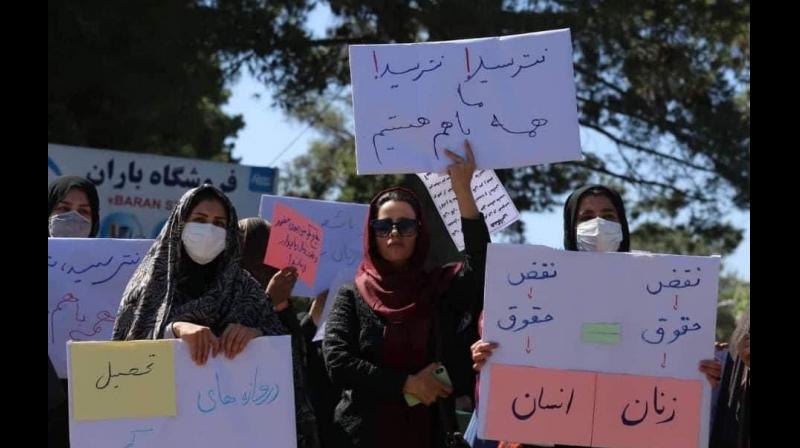 The anger of men remains more acceptable than that of women, especially women of colour. (Twitter)

This last month has been about anger. With the religious-fundamentalist, super-regressive and monstrously-misogynistic Taliban snatching power in Afghanistan, they are poised to return to persecuting minorities and women. We watched with trepidation as a few courageous Afghan women took to the streets within hours of the Taliban’s conquest, knowing, as we do, that their voices raised in righteous anger will be quickly and violently suppressed.

We also watched Jane Eyre on BBC, as an introduction to the text for our secondary school children. More than the love story or gothic horror tale it’s made out to be, it’s an account of the anger of women, and how often it’s silenced. Little orphan Jane is despised and neglected, her resultant anger used against her as proof of her non-conformance, leading to her banishment. Her predecessor in the Rochester home, Bertha’s anger at her fate also condemns her to a shadowy life in captivity.

The anger of women is often equated with irresponsibility, instability or madness. “That time of the month” is thrown in our faces when we’re angered by malpractices. Victorian women expressing their unhappiness at the many injustices against them were imprisoned in mental asylums, disinherited, tortured, and left to die. Even now, if we don’t want to be branded irascible or irrational, we’re advised to swallow our anger. Smile and placate.

If the anger of women isn’t welcome, nor is that of any marginalised group anywhere. Minorities are compelled to accept indignities smilingly. The Simpsons’ Apu, the stereotypical waggle-headed Indian in the West, humiliating himself to ‘curry’ favour, proved himself more than a cartoon when he was temporarily retired after anger at his misrepresentation. Lower castes, other creeds and women in India know well the backlash that follows ‘transgressions’ into privileged spheres. The anger of Blacks in Apartheid-riven South Africa, or in the US before Civil Rights gains, was brutally stamped out. The global oppressed, standing up to their tormentors to ask for redress, is met with disproportionate, even violent punishment. Even now.

Yet history and culture celebrate ‘angry young men’; their lashing out magnanimously viewed as virility and masculine prowess. The Hindi film industry is almost entirely built on this premise, as are many of Hollywood ‘s offerings. They encourage domestic violence and recently, mass shootings targeting women by disgruntled men called ‘incels’.

Despite that, the anger of men remains more acceptable than that of women, especially women of colour. Jane Eyre’s Bertha was thought to be mixed-race. The stereotype of the loud, angry, unreasonable woman of colour is a powerful part of everyday racism in the west, to which Serena Williams and millions of others can attest.  Yet, the demand of women of colour to be fairly treated is not just punished by the Western world but by their own kind, which is what Afghan women are facing today.

The irony of my dark-skinned, middle-aged female existence is that though I’m constantly told to make myself scarce, I cannot help but express my generally justified rage. Because I’m yet another kind of minority, one without a filter: atypical or neurodivergent. Hypocrisy is nearly impossible. But the punishment for this stepping out of line onto pompous mainstream toes is invariably disproportionate. Ostracisation, loss of work and reputation are the usual recompense for those like me who are unable to muzzle themselves. So I found myself a literal forest to hide away in instead, but if you can still hear me, then I haven’t given up yet.

Calamitous recent events like the coronavirus pandemic has made crystal-clear the world must change, and that this has to include the sharing of resources with those who have always been denied their due. Even to anger. But we all know the marginalised won’t be invited to take their rightful place at the table with the privileged anytime soon. So it’s rage we must rehabilitate. To lift the lid off the centuries-old repressed fury of the oppressed, we must destigmatise anger first.

Minorities are muzzled partly because assertive differences of opinion are seen as destabilising to majority beliefs and lifestyle. But this routine suppression also comes from the fact that anger’s not valued, except in ‘macho’ men. Would we cast it in such a negative light, be so keen to snuff it out, if we could see its power for good?

Behind every successful pacific political movement, there’s controlled, empowering anger. Justified anger against wrongdoing once expressed, listened to and addressed, dissipates, allowing intelligent, effective action to be taken. Astutely channelled anger that renounces vendettas or violence, can make the right dent in the right place, without collateral damage, but with the almighty wallop the world needs to wake up and sort itself.

As much a novice at clear-sighted anger management as the next person, probably more, all I know is we must stop making a virtue of hypocrisy and pretentious, pointless etiquette. Even more of browbeaten silence! If we’re ever to bring balance back to the world, making room in the circle of plenty for the marginalised, we have to facilitate the articulation of distress, taking care never again to self-stifle either. “To thine own self be true”, remember?

So, do look back and forward in anger, whatever pop culture might say. Shrug off the socially imposed Madam Butterfly effect, flaming terrifyingly into Maa Kali instead. Square up to a discriminating world, speak up, and repeat.