Waqyanawis | Hope alive for those shown the door in BJP reshuffle 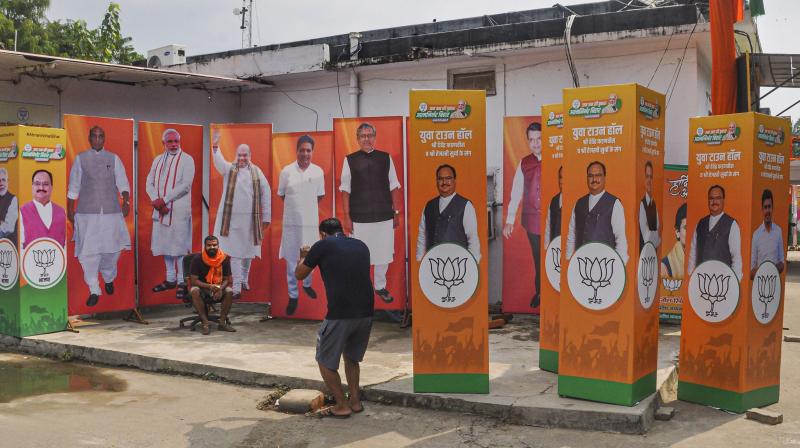 ife-size posters of BJP leaders displayed at party office ahead of the upcoming Bihar Assembly elections, in Patna. PTI Photo

The BJP organisational reshuffle has not disappointed anyone. It seems all those shown the door are hoping for “better” options. The party’s former vice-president, Vinay Sahasrabuddhe, is said to be angling for a Union Cabinet berth.

Sahasrabuddhe is currently head of ICCR, enjoying a Cabinet rank. Therefore, it remains to be seen whether Prime Minister Narendra Modi would accommodate him as the country’s education minister.

Another axed vice-president, Prabhat Jha, is hoping to get a gubernatorial assignment. Ram Madhav, who was a party general secretary and a player in the northeastern states and Jammu & Kashmir, is aspiring to head the party in his home state Andhra.

Swamy’s focus on obtaining a higher educational qualification is being viewed with a lot of interest. Some cynics wonder why Swamy, an astute politician, currently unhappy with the BJP leadership for its failure to “discipline” in-house Swamy-baiter Amit Malviya, has written this.

Malviya heads the BJP IT cell and weeks before the BJP organisational reshuffle, Swamy had boasted that Malviya would be removed. Nothing happened.

The controversy around Sonia’s educational qualification was first raked up in 1999 when the Congress president had reportedly attributed her English language course obtained in Cambridge to the University of Cambridge. Sonia had apologised, pointing that it was a “typing mistake”.

Man of many bosses

He has been described as an ‘eighth wonder’ of the world. Uttar Pradesh’s senior bureaucrat Navneet Sahgal has a knack of bouncing back.
The former principal secretary to chief minister Mayawati and Akhilesh Yadav, has now become head of the information and public relations department under chief minister Yogi Adityanath after the Hathras gang-rape outrage. Yogi, struggling to counter adverse media coverage, had no choice but to think of Sahgal as his Man Friday.

Sahgal also holds the distinction of serving as personal secretary to Union minister Akhilesh Das who had belonged to the Congress during Manmohan Singh era. In a state where bureaucrats get marked over their alleged political affiliation, Mr Sahgal, currently additional chief secretary, is proving to be an exception. Exceptional.
Midnight ‘news’ alerts

Journalists covering the Lok Janshakti Party (LJP) are both intrigued and annoyed for getting WhatsApp messages on almost a daily basis post-midnight. The message, attributing information to a prominent LJP leader, makes sensational claims such as LJP walking out of NDA or fighting all Bihar Assembly seats independently.

While it disturbs the sleep of many scribes, mornings usher in business as usual within the NDA.

All is not well between former Madhya Pradesh chief minister Kamal Nath and senior party leader Digvijaya Singh. At one point when the Congress was in power for 15 months from December 2018 to March 2020, the Nath-Diggy jodi was a bada bhai-chhota bhai pair.

But now that crucial Assembly by-polls have been announced in 28 seats, Digvijaya is not to be seen for campaigning.

Kamal Nath, at 72, is fighting a lone and grim battle to regain a foothold in MP politics. Chances of dislodging Shivraj Singh Chouhan regime are slim as the BJP needs to win barely one third of the seats going to polls while the Congress would need almost all of them: the 20 out of 28 seats for Congress is seen as a figure that would rattle everyone in the BJP from Bhopal to New Delhi.

The November 10 verdict is keenly awaited when results of these by-polls would be declared along with the Bihar Assembly outcome.