During this testy phase of international relations, all nations, big or small or intermediate, are practising realpolitik 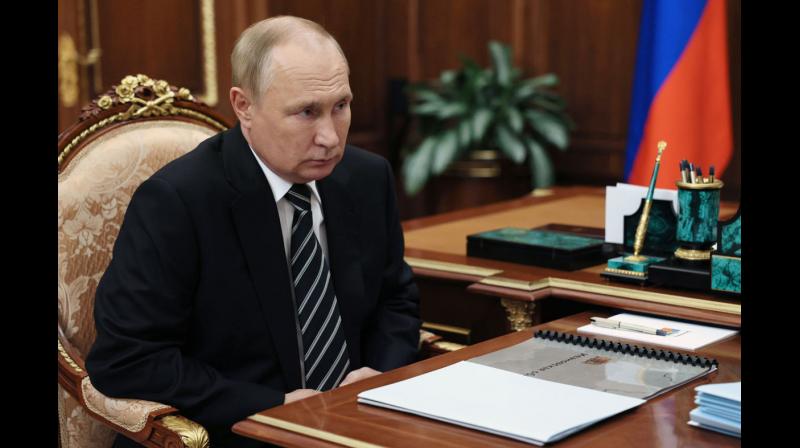 Russian President Vladimir Putin, in his September 30 address, threatened Nato with, among other things, his nuclear arsenal. (Photo: AP)

October has begun with dramatic global developments that have serious implications. Russian President Vladimir Putin, in his September 30 address, threatened Nato with, among other things, his nuclear arsenal; protests persisted in Iran over the detention and death of Mahsa Amini, who was arrested for improper head-covering; Brazil’s presidential election results are inconclusive and have gone into a runoff to take place on October 30; and the crucial twentieth Chinese party congress is just a fortnight away.

The standoff in Ukraine worsened after President Putin announced a series of referendums in four Ukrainian provinces — Luhansk, Donetsk, Zaporizhzhia and Kherson. Two of them are partially occupied. On October 1, with the Ukrainians capturing Lyman, a vital hub in Donetsk, the hype over the annexation began to dissipate. The folks in Lyman are quoted by the New York Times as saying they weren’t aware they were technically in Russia the last few days. One woman quipped: “Without me, they married me”. The Ukrainian forces, having got the Russians on the run in the northeast, remain in pursuit. In the south, near Kherson, the Ukrainian forces are advancing slowly as they face more determined Russian resistance.

The situation’s absurdity aside, observers are noting that not since the 1962 Cuban missile crisis has Russia resorted to a nuclear threat. Alleging that Nato was seeking Russia’s collapse, Mr Putin indicated his readiness to use “all available means”, an euphemism for the nuclear option. He blamed the United States for setting a precedent by using nuclear arms against Japan in 1945.

Chechen leader Ramzan Kadyrov, a Putin ally, even suggested the use of tactical nuclear weapons, which are low yield but lethal. Russia has about 2,000 such nukes.

The US has reportedly taken the threat seriously enough to game different scenarios. The annexation of the four provinces by Russia now make Ukrainian military operations in or against them technically an attack on Russian territory.

Analysts surmise that Russia may explode a tactical nuke over the Black Sea to demonstrate its resolve or use it against advancing Ukrainian forces or a Ukrainian military base. US national security adviser Jake Sullivan warned that any such use would lead to “catastrophic consequences”. It is possible that Mr Putin may yet be bluffing to buy time for his newly recruited conscripts to begin strengthening his defensive lines, until autumn rain and then the winter snow slows down operations anyway. However, a consensus is building that Mr Putin’s recent acts and statements mean he is digging in for the long haul. He hopes that energy and food price inflation should start causing disunity in Nato as domestic opinion turns against the war.

That is where Brazil’s election assumes significance. With right-wing parties, some with fascist links, winning in Sweden and Italy, there is fear that like Hungarian PM Viktor Orban, leaders with pro-Putin biases may shatter European unity in opposing Russian aggression. The Brazil election resulted in the left-wing challenger and former President Luiz Inacio Lula da Silva, popularly known as Lula, leading with 48.4 per cent of the vote, just short of the halfway mark needed for outright win. The incumbent, Jair Bolsonaro, a Donald Trump clone, obtained 43.2 per cent vote, more than the polls projected. They now face a run-off poll on October 30.

Since 2018, leftist parties have won five out of six elections in Latin America. If Mr Lula wins, that would make the score six out of seven. Nationalist populism, laced with faux religious piety, makes a deadly mix that erodes democratic institutions and eventually democracy itself. Supporters of Mr Bolsonaro have won some critical governors’ posts. Seven former ministers of Mr Bolsonaro won, including his environment minister, who allowed the ravaging of the Amazonian rain forest, and the health minister, who mishandled the Covid-19 epidemic.

Accountability takes a backseat when politics gets polarised. Brazil is a vital member of the Brics and G-4, a group consisting of Brazil, India, Germany and Japan, to lobby for UN Security Council reforms. But with a leader like Mr Bolsonaro, the international influence of Brazil fades, as it begins to appear unworthy of permanent membership of the UNSC.

The internal churn in Iran negatively impacts restoration of the nuclear deal and the possibility of increased Iranian oil exports relieving global energy price hikes. Iran has a history of street protests going back to the nineteenth century, when protesters during the Qajar dynasty would gather, protest, and then march to one of European missions for shelter, known as “Bast”. Sometimes they would stay there for months till the European intervention resolved the dispute. During the last two protests — in 2009, over election-fixing charges, when Ahmadinejad won a disputed second term, and in 2019, over the gas price escalation, when the US did not take sides. It was felt that any overt US stand would allow Iran’s regime to paint the pro-tests as externally provoked. The Biden administration, however, has chosen to throw its support behind the youth, led by women. Iranians are protesting outside Iran’s embassies in many nations.

The Opec+ meeting is being held in Vienna on October 5 to decide on the proposed cut in production by a million barrels per day to keep the price high as global economies sputter, leading to anticipated lower demand.

Iran is a vital cog in this scheme. Under sanctions, it is restricted from bringing its oil on the market and is producing well below its potential output. US sanctions have been imposed on an Indian company for helping Iran to export oil to China.

On October 1, China’s People’s Liberation Army (PLA) celebrated its Martyrs’ Day, as the People’s Republic turned 73. Two weeks from now is an important party congress, and President Xi Jinping is rallying the nation towards the “new era”, centred around his personality and thought. One example was the joint statement on February 4 made by the Presidents of China and Russia: “International Relations Entering a New Era”. That has not gone as planned as Russia has become a burden, though the longer the Ukraine crisis lingers, the more Russia becomes dependent on China.

In this complex scenario, India is tiptoeing to keep channels to all sides open. The danger is that when the US announces a $450 million revamp of Pakistan’s F-16s, it simply ignores Indian protests. The Americans too are protecting their national interests at a time when the Taliban sign an agreement to buy Russian oil and gas. Thus, during this testy phase of international relations, all nations, big or small or intermediate, are practising realpolitik. That is the new era.