Modi’s main opponent in Gujarat is the Congress Party and he must therefore paint it in black colours. 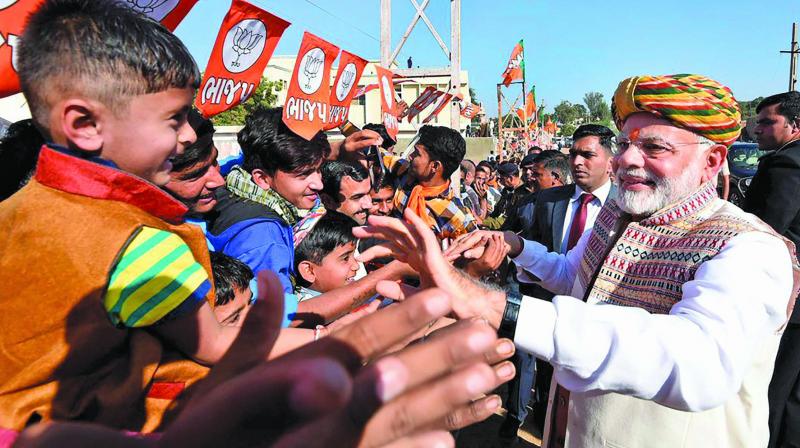 You have to pinch yourself to believe that it is the Prime Minister of India who is lustily stirring the caldron of regional chauvinism. Admittedly, it was during his carpet-bombing Gujarat in his campaign for the BJP for the looming Assembly election in the state.

However, despite the position of national leadership that he holds, to lend encouragement to dividing the country instead of seeking to unify it is a strange kind of statesmanship. It is because of nervousness about his party retaining the state that he has descended to this level.

Mr Modi’s main opponent in Gujarat is the Congress Party and he must therefore paint it in black colours. He dips into modern Indian history to accuse Jawaharlal Nehru of being less than fair to two Gujaratis of note — Sardar Vallabhbhai Patel and Morarji Desai — in refusing to give them their due and cherished dreams. Indira Gandhi, he said, had covered her mouth and nose with a handkerchief to protect herself from a foul smell at a public meeting in Gujarat.

Mr Modi and his party believe that campaign rhetoric is ephemeral and will blow away with time. This is not so when the nation’s Prime Minister indulges in hurtful statements inimical to the national interest.

More broadly, the feverish Gujarat election campaign has laid bare the political objectives of the ruling party. The BJP’s main priority is twofold: to complete the task of obtaining a majority in the Rajya Sabha and to change the Constitution by making it more authoritarian. But the party realises that the step-ladder to gain these objectives is to win elections in all states. Where it is not possible, the attempt will be to form big brother coalitions.

Mr Modi showed his hand by winning an absolute majority for the BJP in the 2014 Lok Sabha election for the first time ever. It was through means of bringing modern technology, including holograms, and the use of computing skills to tailor the campaign to states, districts and cities.

The BJP’s motto is that all is fair in fighting elections, however ugly the methods employed and the tricks resorted to may be. After its defeat, the Congress and other Opposition parties have been seeking to copy the Modi formula but they are playing the catch-up game.

And there is one asset that the Opposition simply can’t match — an army of a multitude of dedicated and disciplined workers of the Rashtriya Swayam-sevak Sangh going into every nook and corner of the state or the country in a poll-bound state or in national elections.

At a recent public interaction with the Chief Justice of India, Mr Modi suggested that the different branches of constitutional governance had their areas cut out for them. True enough, but it is the Constitution’s purpose that the task of the judiciary is, among other duties, to check the executive in deciding whether it was misusing its authority. The Supreme Court is still held in great esteem.

The sad part of the story is that the Election Commission, which had a reputation for fairness, blotted its copybook by indulging the BJP and giving it all the time to rain goodies on the state. The fact that the Chief Election Commissioner belongs to the Gujarat cadre may or may not have influenced its decision. In any case, the Gujarat cadre holds key positions in the Prime Minister’s Office in Delhi.

A greater blow to India’s acclaimed electoral system is an increasing feeling among Opposition parties that the electric voting machines can be tampered with. This follows the unexpected bumper results of the BJP in the local polls in Uttar Pradesh. Think of the mountains the country has been saving in paper by successfully conducting machine-based polls so far, so therefore the authorities must convince all parties that these machines remain foolproof.

These are disturbing trends in a country that is being changed from a secular state to majoritarian Hindu rule in a wider world that is undergoing convulsions. The Cold War was over quite some time ago and the new challenge is of the United States and a rising China feeling each other in an era where developed countries are tired of globalisation and are striking increasingly nationalist postures. This is a time for Indian consolidation, rather than fragmentation.

In view of the BJP’s ability to win elections, it is first of all the task of the Sangh Parivar leadership to sit down and contemplate whether it believes the national interest counts higher than the objective of building a Hindu India. The Parivar may contend that the two objectives are the same, but that is patently false, given the composition of the country’s population.

The question that arises is — who will bell the cat? Mr Modi is still testing his powers vis-à-vis the RSS leadership and he knows the virtues of discipline, having been brought up in the organisation. The Opposition can help in building a strategy in bolder terms.

One of the gifts of the Independence generation was to place the advancement of the country in the context of the wider world. Given its military might and riches, a superpower can survive a period of looking inward embodied in US President Donald Trump’s policy of “America First”. But in a country seeking prosperity and legitimate influence in the region and the world, giving priority to changing the concept of India would be disastrous.

Mr Modi has shown imagination in pursuing the country’s basic foreign policy goals. He has managed the relationship with Mr Trump quite well and has basically stuck to keeping relations with Russia on an even keel. In China’s claims to superpower status, New Delhi is watching warily in terms of the response it can offer.

Contrary to Rahul Gandhi’s jibe at Mr Modi’s Pakistan diplomacy in electoral repartee, the Prime Minister was on the right track when he made his surprise visit to Nawaz Sharif in Pakistan. Not every initiative in diplomacy turns out to be successful.