A speech by King at a local church less than 24 hours earlier was in retrospect interpreted by some as premonitory. 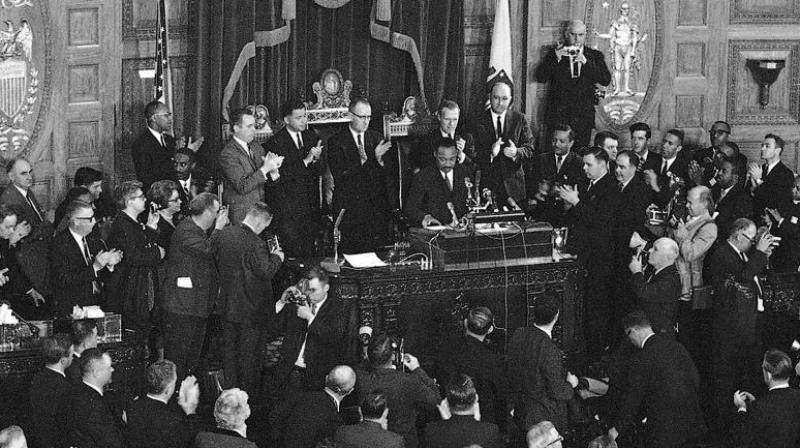 Dr. Martin Luther King Jr., center, receives applause after finishing a speech to the joint session of the Massachusetts Legislature in Boston, the day before he led a civil rights march to Boston Common. King's final speech before his 1968 assassination will be read aloud 50 years later on Monday, April 2, 2018, in downtown Boston. (Photo: AP)

In the United States, April 4 marks the assassination of its most prominent 20th-century moral exemplar.

Fifty years ago today, just after 6 pm local time in Memphis, Tennessee, a hunting rifle barked and the bullet found its mark, lodging itself in the head of Martin Luther King Jr, the 39-year-old preacher who had spearheaded the civil rights movement, as he stood on the balcony of the Lorraine Hotel.

A speech by King at a local church less than 24 hours earlier was in retrospect interpreted by some as premonitory. He had been to the mountain top and seen the promised land, he declared in his sonorous baritone, but “I might not get there with you”. In fact the shadow of death had chased him for more than a decade, ever since his leading role in organising a bus boycott in Montgomery, Alabama, in 1955, following the arrest of Rosa Parks for refusing to give up her seat for a white passenger.

Less than eight years later, King delivered his magnificent “I have a dream” oration at the March on Washington, and not long afterwards the civil rights bills put in train by the Kennedy administration were signed into law by Lyndon B. Johnson, with King standing beside him. In the interim, there had been plenty of demonstrations, riots and racially motivated murders — as well as the flowering of radical alternatives among African Americans who mocked King’s gradualist, non-violent approach in the march towards greater equality.

Many of the more militant figures, including Malcolm X, were at the same time fully conscious of the fact that their uncompromising rhetoric opened up space for King’s relatively cautious demands.

King was well aware though that, 100 years after the Emancipation Proclamation, gaining the right to vote and not to be discriminated against was an extremely belated recognition of equal rights and failed to redress various other aspects of institutionalised injustice. He also realised that he could not in good conscience criticise the fierce protests that sporadically erupted in ghettoes without calling out his nation’s status as the single largest perpetrator of violence in the world.

Evidence for this contention could be summed up in a single word: Vietnam. Several of King’s advisers felt this would compromise his primary agenda and feed into the FBI’s “communist” smears. But King decided the alternative was tantamount to hypocrisy. He delivered his most potent excoriation of American war crimes precisely a year before he was silenced.

The same year he also came up with a strategy for redressing inequality for all disempowered minorities. The Poor People’s Campaign, planned for 1968, echoed the March on Washington, but the idea was that a substantial proportion of the protesters would ensconce themselves on the National Mall and refuse to budge until their demands were addressed. The recipe was appropriated by the sadly short-lived Occupy movement more than 40 years later.

In March 1968, King had gone to Memphis to support a sanitary workers’ strike, launched after a malfunctioning garbage truck had crushed two workers to death. A march led by him went awry when some of the participants resorted to violence. King was appalled, and resolved to return to the city in order to re-establish his non-violent credentials. While his representatives were negotiating with the Memphis authorities to obtain permission for a peaceful march, an escaped prisoner named James Earl Ray, a devotee of the segregationist former (and future) governor of Alabama, George Wallace, was shopping around for a powerful hunting weapon.

Ray was arrested in London two months later while trying to arrange his passage to a suitably racist African state such as Rhodesia or Angola. He confessed to his crime and was incarcerated for life, but King’s family and many of his associates eventually came to the conclusion that Ray wasn’t the sole perpetrator, and perhaps even a patsy in a deep-state conspiracy. Who knows. FBI chief Edgar J. Hoover’s visceral hatred towards King was never much of a secret. As King’s aide Andrew Young put it back in the day, what mattered more than who killed him was what killed him. The chief culprit was racism.

It could be argued that the advent of a Ku Klux Klan-endorsed administration in the wake of America’s first black presidency negates everything King stood for. On the other hand, the phrase “black lives matter” sums up the essence of King’s crusade. His nine-year-old granddaughter Yolanda Renee was the youngest speaker at the largest of last month’s March for our Lives rallies. And the spirit of King — who pioneered protest marches by schoolchildren in Birmingham, Alabama, in 1963 — lives on through the likes of not just Emma Gonzalez and Naomi Wadler but also Ahed Tamimi and Malala Yousafzai.