India cannot ignore the fact that Australia, Japan and the United States continue to do far more business with China than they do with India 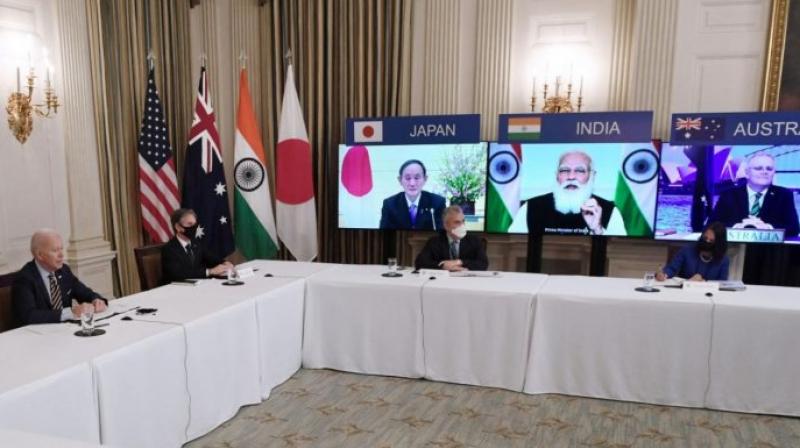 Given the kind of links that China has established with all major economies, it remains to be seen how effective the Quad countries can be in decoupling themselves from China. (AFP file photo)

Even at the height of the Cold War and the anti-Communist McCarthyism of the 1950s in the United States, when Americans were warned to look for “Reds under the bed”, Hollywood never dreamt up a story in which a high-level Soviet woman spy makes it to the US defence secretary’s bedroom. So an Australian television series, Secret City, that shows the wife of the Chinese ambassador in Canberra, an attractive Mata Hari doubling up as a Chinese secret agent, having a torrid affair with none less than the defence minister of Australia, shows how intimate have been the links between the power elites of China and Australia.

Social intimacy between the Chinese power elite and their Australian, Japanese and even American counterparts has been cemented over four decades of intense diplomatic, business and people-to-people engagement between them. By contrast, the very limited social contact between Indian and Chinese elites sets India aside from its partners --Australia, Japan and the United States -- in the four-member Quadrilateral Security Dialogue, that has come to be known as the “Quad”. This despite India’s increased social and business interaction with China over the past three decades.

Many analysts have pointed to the key paradox in the Quad -- that each of the four countries have extensive economic links with China that they cannot wish away even as they seek to engage in what some have termed the “geo-economic containment” of China. All four countries have been trying to reduce their economic dependence on China even as China is itself trying to reduce its dependence on external trade. While the numbers are changing, the magnitudes are still large.

India cannot ignore the fact that Australia, Japan and the United States continue to do far more business with China than they do with India. It could take a long time before their trade and investment links with India are large enough for them to ignore China. Till that happens, India must expect that its three Quad partners will hedge their bets in dealing with China.

Apart from the business and economic links, it is the social links with China that set Japan, Australia and the United States apart from India in a significant way. Japan and China have had centuries old and intimate social and cultural links that continue to manifest in high level of people-to-people interaction between the two neighbours. Millions of Chinese and Japanese travel to each other’s countries. Chinese students are to be found in the thousands in Japan and vice versa. Taken together, the business and social relations between the two have created an influential pro-China constituency within the Japanese elite. The level of social and cultural interaction between Indian and Japanese elites is woefully limited.

As for Down Under, the plot of Secret City has not been conjured out of thin air. It reflects the kind of social intimacy that the Chinese and Australian elites have established over the past century. As with Japan so with Australia, inter-elite interactions with China remain far in excess of such interaction with India. While an increasing number of Indians now study and work in Australia and Indo-Australian relations have improved over the past decade, there are few among the Australian elite who take a more favourable view of India than they do of China.

The US is in a special class of its own when it comes to “Sinomania”. Indeed, it’s recent “Sinophobia” has not yet turned China into the kind of object of hate and derision that the much less powerful Russia still is. US-China people-to-people relations have had a long history. Chinatowns and chop suey have been an important part of American social life from New York to San Francisco. Millions of American and Chinese students and tourists have visited each other’s countries for close to a half century now. Several US universities and think tanks are funded by Chinese businesses.

The more limited interaction that Indian elites have had with their Chinese counterparts over the past couple of decades of increased social and economic interaction will now only atrophy given the deterioration in the bilateral relationship in recent months. The behaviour of the Chinese authorities would seem to suggest that they do not really care if their business and social relations with India will suffer on account of the geopolitical differences. That will be a pity.

Consider next the geopolitical space within which the Quad functions, namely the Indo-Pacific. This too is a peculiar construct. Almost all countries of the Indo-Pacific not only remain economically engaged with China, they do more business with China than they do with the United States or India. Not surprisingly, therefore, they all signed up for membership to what has been described as the “China-led” Regional Comprehensive Economic Partnership (RCEP). Japan is the only RCEP country that insisted on keeping the door open to India even as India chose to walk out. Most others looked the other way and went along with China.

Handling this paradox at the heart of the Indo-Pacific region in general and the Quad in particular will remain a challenge for all countries, including China. Continued assertiveness and muscle-flexing by China can only strengthen the resolve of countries in Asia and Europe to reduce their dependence on China. While China is big enough to continue to grow on the strength of its domestic economy, it’s very size and expanse makes it dependent on links with the rest of the world. China has also learnt from the former Soviet Union’s experience that excessive insularity is as much of a threat to internal growth and stability as excessive dependence. Economies large and small have to strike a balance between self-reliance and building relations of inter-dependence with the rest of the world. Given the kind of links that China has established with all major economies, it remains to be seen how effective the Quad countries can be in decoupling themselves from China and for how long China can afford to completely ignore global opinion.