Opinion   Columnists  05 May 2019  Why Madan is back; will Naveen get a 5th term?
Opinion, Columnists

Why Madan is back; will Naveen get a 5th term?

Mitra is also a known bahubali of the area and, more importantly, Arjun Singh was once his protégé. 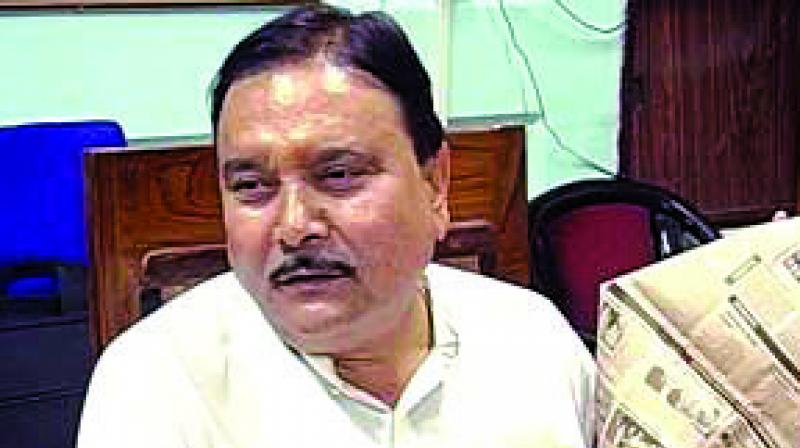 West Bengal chief minister and Trinamul Congress chief Mamata Banerjee took everyone by surprise when she named Saradha scam accused Madan Mitra as the party's candidate for the by-poll to the Bhatpara Assembly seat. It was widely believed that Mr Mitra had fallen from grace after he was jailed in connection with the infamous Saradha chit fund scam. Though he was released more than two years ago, the Trinamul chief had chosen to keep him at arm's length. But Ms Banerjee had her reasons for rehabilitating Mr Mitra. The move was necessitated after she received feedback that Dinesh Trivedi, sitting MP from Barrackpore Lok Sabha constituency, was being given a tough time by BJP's Arjun Singh, who had recently left the Trinamul Congress in a huff when he was denied a ticket by Ms Banerjee. Mr Singh is a known bahubali and the genteel Mr Trivedi was ill-equipped to deal with his rough ways. So, Ms Banerjee pulled out Mr Mitra from oblivion and named him candidate from Bhatpara, an Assembly seat in Barrackpore constituency. Mr Mitra is also a known bahubali of the area and, more importantly, Arjun Singh was once his protégé. The upshot is that Mr Trivedi can now breathe easy as his chief opponent Mr Singh is being ably handled by his former mentor Mr Mitra.

The four-term chief minister of Odisha, Naveen Patnaik, is known to be low-key, understated and reclusive. He barely moves out of the state and is seen and heard on a few occasions which had led to a lot of speculation about his failing health. However, in this election — Odisha has simultaneous state and Lok Sabha polls — Mr Patnaik has turned a new leaf. He is now more visible and vocal. Faced with a resurgent Bharatiya Janata Party in his home state, the chief minister has been campaigning actively, has given several interviews and has also reached to the youth through social media. In addition, he has put out video clips about his exercise regimen to dispel the widespread impression that he is ailing and, therefore, incapable of discharging his duties as chief minister. In fact, he has publicly blamed his former party colleague, Jay Panda (now with the BJP) for spreading rumours about his ill health in Delhi. This reference to Mr Panda and his health has touched an emotional chord among the people, especially women, who are clearly upset and angry about how Mr Patnaik had been backstabbed by a party member. All these efforts are working to Mr Patnaik's advantage who may well return as chief minister for a record fifth term.

The Bharatiya Janata Party cadre is wondering if it was necessary for Prime Minister Narendra Modi to hold a massive road show in Varanasi before filing his nomination papers for the Lok Sabha election. His two-day stay in the city involved hectic preparations by party workers in the midst of an election and was also an expensive affair with several hundred tons of rose petals being showered during the seven-kilometre roadshow through the streets of Varanasi. It is believed that Mr Modi's programme, which would normally have been scheduled just before polling, was held earlier to pre-empt and overshadow the announcement about Congress general secretary Priyanka Gandhi Vadra's candidature from Varanasi. However, the Congress backed off from fielding her, as a result of which the main purpose of Mr Modi's roadshow was defeated. While questioning the need for scheduling the programme, BJP members said it was unnecessary considering Mr Modi's victory in Varanasi is a foregone conclusion. Instead, the BJP's star campaigner could have been utilised in constituencies where the party needs a boost.

The Trinamul Congress and the Congress may be busy attacking each other on the campaign trail but they are also keeping their options open for a post-poll rapprochement. Last week, a delegation of Trinamul Congress leaders approached the Election Commission to complain that the Bharatiya Janata Party's name was being displayed along with the party symbol on the electronic voting machines during a mock drill in West Bengal's Barrackpore Lok Sabha constituency. On learning about this, the Congress also decided to reach the Election Commission with a similar petition. Congress leaders were, however, baffled about their involvement in this case as they felt that their petition was unnecessary and uncalled for. Apparently, it was Congress treasurer Ahmed Patel's idea that the Congress also led a delegation on the same issue on the same day the Trinamul Congress leaders were reaching the Election Commission. The canny politician that he is, Mr Patel later explained to his doubting colleagues that this display of solidarity with the Trinamul Congress was needed as it could become necessary to build bridges with Mamata Banerjee after the Lok Sabha elections.