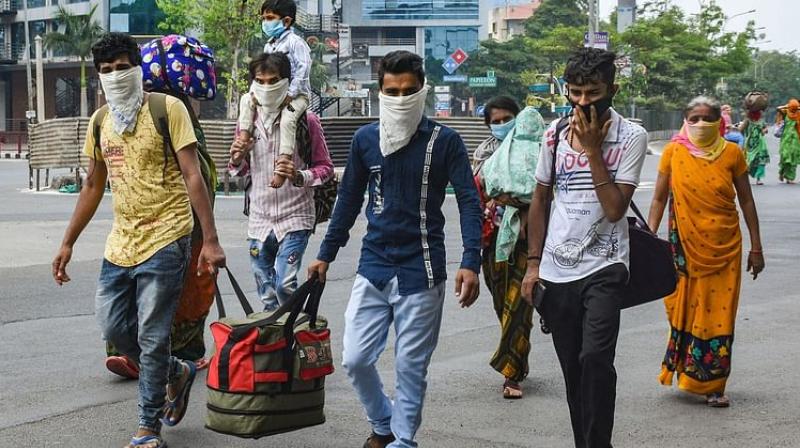 ‘Politicians need not answer inconvenient questions if they emanate from the great unwashed.’

Edward Bulwer-Lytton, the Victorian novelist and playwrightscornfully called them Messrs. The Great Unwashed. They were a collective mass of people who were considered to be uneducated, uninformed, or in some other way unqualified for inclusion in his elite circles. That was in 1830.

Their living conditions haven’t changed across the world even after two centuries. They still live in squalid, makeshift accommodations. And they remain besmeared and unwashed. They are the proletariat.

With the coronavirus outbreak moving to the next stage in India, lockdown has been extended for nineteen more days.

While the privileged have started looking for the next social media trend they can emulate to pass time while they sit at home, about a million people are cooped up in various relief camps across India, not knowing when they can get back home or when they will get the next ration.

They are angry, starving and impatient. They are bare bodied and open to infection. They are India’s unwashed. The migrant workers.

‘We have no income since the last three weeks. Entire country is fighting a global pandemic from inside their homes, with their families, and we are left to rot in a faraway camp where there is no food and water’.

This penurious millionthat lives in temporary shanties cannot practice social distancing. They do not have six feet of land on this earth. They wouldn’t care about hand sanitizer bottles.

They would instead prefer a bottle of kerosene for their stove. They cannot practice twenty seconds of handwashing. Running water is a dream for them. The only water they have access to is the water collected from a public stand post in theirvicinity, once a day. They remain unwashed. And infected.

'Just give us one day. Give us some transportation. Let us get back to our homes. After that you lock the country down for as long as you want. We will not trouble you’.

About 2000 migrant workers had gathered at a bus stand in Bandra. A few hundreds were on the streets in Surat. Many in Delhi are on the garbage laden shores of Yamuna. Many among them had walked off to their villages a few weeks ago.

They all want to get back to the safety of their homes. They no longer have faith in the governments of states where they are in.Not only do they not have proper shelter, many of these migrant workers are also left out of central schemes meant to assure food security.

Though the central government has announced freebies through schemes like Pradhan Mantri Garib Kalyan Anna Yojana, many of these migrant workers are not benefitedbecausethey left the ration cards with their families in their villages. Their immediate challenge is not Coronavirus. It is food.

And this, when Food Corporation of India has a stock of 77 million tons of food grains in stock, three times the buffer stock norms. But even if the government decides to release the stock, will it reach them? Can India do it without malfeasance sneaking in?

‘I have no money to recharge my phone. I don’t know what is happening to my family in the village. How much longer are we supposed to wait before we could go back?’

A major portion of India’s migrant population is the underprivileged migrant labor who do distress migration in search of employment.

For those who migrated to a new state, into a new culture, far away from home conditions, life has been tough and arduous even without coronavirus striking their existence. Made to survive in the nooks and crannies of the cities, they survived picking up whatever work came their way.

They were harassed by the politicians and the police. They were blamed for the ills affecting the society and crimes committed in those cities.And above all they are constantly hunted by rumor-mongers who wish to instigate trouble. Spraying them with bleach meant to sanitize buses by some state officials recently show the dreadful plight they are in.

‘I would have had to walk close to 250 kilometers to get home. I decided not to do that. But now that I can’t survive here I regret not walking that 250 kilometers’

The defining images of India’s three-week lockdown may be of migrant workers, with bags on their heads and children in their arms, walking down highways in a desperate attempt to return to their villages hundreds of miles away. Many who began their walk did reach their homes. But many did not. Some fell dead on the roads, hungry and exhausted. And with no food, no shelter and no safety those who stayed back now regret their decision.

Is this current spate of distress faced by the migrant workers, a result of unplanned and ill-conceived lock down? Probably not. It isn’t unplanned or ill-conceived.

For, Covid19 is essentially an urban virus and the government is aware of the disaster that is waiting if the virus is carried to the villages, considering the pitiable condition of primary health centers in villages where there are no facilities for testing, let alone isolation and treatment.

The virus has given these migrant workers a sudden visibility in the national discourse. This painful period might pass. The migrants will survive this period with the pittance of support tossed at them by the governments during the distress. They will return to their villages at the end of the lockdown period and will soon return to work with renewed determination. But fact remains that India ignored them for too long during normal times.

We, the privileged of India have been far too nonchalant in lending a helping hand to alleviate their poverty. We have been reluctant to meddle in matters of the state and we conveniently left poverty and its perils to the wisdom of the state.

We forget that we can move social consciousness, individual or collective, to combat one of the greatest evils of humanity of all times, inequality and its corollary, poverty. We may have to use some ingenious methods through literacy, skill development and media to achieve this.

We must coerce the governments of the day and the social organizations to develop policies and outlook to ensure universal right to food, health, decent housing, and work so that social justice is implanted ... for a better India.

Time has come for us to give a solemn assurance to The Unwashed of the country and, with all sobriety, strive to honor that commitment.

Jagadish Nair is a writer and commentator on current topics, freelance photographer and SAP solution architect.