Opinion   Columnists  05 Jun 2018  Of Pranab, Nagpur and the signals before 2019
Opinion, Columnists

Of Pranab, Nagpur and the signals before 2019

If Narendra Modi and Amit Shah didn’t actually advise Mohan Bhagwat to invite the former President, they must be privy to the invitation. 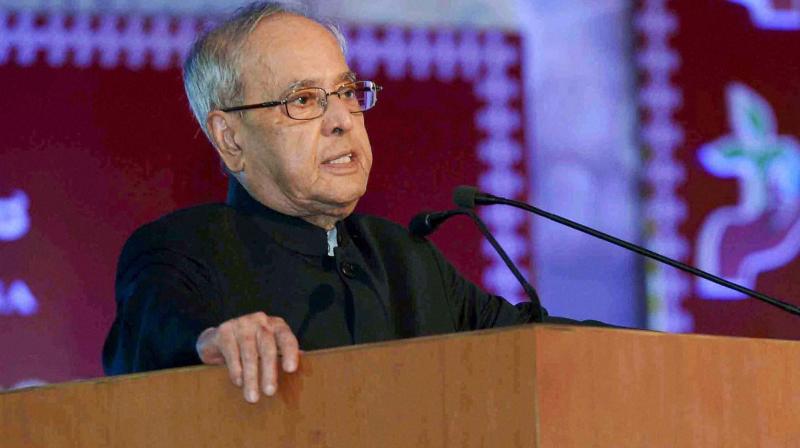 Laced into the gnashing of teeth in the Congress’ ranks over the Rashtriya Swayamsevak Sangh’s invitation to former President Pranab Mukherjee can be heard the grinding of axes. Why did the RSS ask a supposedly dyed-in-the-wool Congressman to be chief guest at an event to mark the culmination of 23 days of physical training and ideological indoctrination for Hindutva’s stalwarts? Why for that matter has the man who worshipped the ground Indira Gandhi trod on accepted the invitation? Not only do the answers to these poseurs promise – threaten? – to make the run-up to the next general election, and its aftermath, additionally exciting, they make one wonder when and where the idea of a Third Front, flaunted in Bengaluru recently, was really born.

For all one knows, the former President might roundly lecture his Nagpur audience on the abiding virtues of cultural tolerance and secularism and the need for vigorous pluralism as opposed to majoritarian domination for a multi-religious country like India. But, somehow, that seems unlikely. If the RSS had wanted a repetition of the gospel according to Jawaharlal Nehru, it would have invited Rahul Gandhi or perhaps his mother. It’s not for lay folk to divine how minds work in the magic circle of pendulous bellies over baggy khaki shorts (which the faithful curiously called “knickers” until 2016, when they were replaced by the supposed dignity of brown trousers), short-sleeved white shirts and black caps. All that can be assumed is that the invitation was calculated to sow confusion and dissension in the Congress ranks (which it has already done), assure Mr Mukherjee that life can begin after the presidentship ends, and yield dividends for the RSS and its protégé, the Bharatiya Janata Party.

The RSS may have spawned the old Jan Sangh, but the roles were reversed in 2014 as they were not in 1998 when Atal Behari Vajpayee took over. Despite periodic media reports of rifts between the two, the pracharaks,swayamsevaks and sarsanghchalaks are well aware that the BJP’s formidable temporal power makes all the difference. Without it they would have been bracketed with other socio-religious welfare organisations like the Bharat Sevashram Sangha and Ramakrishna Mission and dismissed with a casual namaskar and a token donation in a land teeming with all manner of self-anointed and self-serving godmen, to use that horrible Indian infliction on the English language.

Therefore, any major RSS initiative must not only benefit both organisations but also enjoy the BJP’s full endorsement.

If Narendra Modi and Amit Shah didn’t actually advise Mohan Bhagwat to invite the former President, they must be privy to the invitation. Having worked so closely with Mr Mukherjee for the last three years of his presidency, they must have a shrewd understanding of what animates him most. They may remember the nameplate on a Lutyens bungalow “R. Venkat-araman, Former President of India”, suggesting that the trappings of Rashtrapati Bhavan were missed. P.V. Narasimha Rao’s comment was: “As a lover of anonymity, I have never even had a visiting card!” Very few politicians love anonymity.

The former President does nothing lightly. Everyone is therefore eager to interpret his acceptance. He must know that however earth-shattering his speech in Nagpur may be, what really counts is his presence there. The saffron brigade diligently proclaims that Mahatma Gandhi, B.R. Ambedkar and Jayaprakash Narayan also graced RSS events. Never do they breathe a word of what these worthies uttered. They probably didn’t say anything momentous. If they did say anything of consequence, it may have passed over the heads of listeners. The RSS’s singular philosophy hardly makes it a forum for intellectual discussion.

If Mr Mukherjee has nevertheless agreed, it must be for his own sake rather than the host organisation’s. Given his stature, political experience and erudition, going to Nagpur can’t be just a propitiatory gesture like Visva-Bharati’s officiating vice-chancellor Sabuj Koli Sen parroting the BJP’s election slogan “Sabka Saath, Sabka Vikas” to curry favour with Mr Modi who was in the audience. Sycophancy runs in India’s life blood. But Mr Mukherjee’s devotion was to Indira Gandhi, and then — possibly because she was so obsessed with her younger son — to Sanjay.

If there’s anything to compete with these personal loyalties, it is his unfulfilled ambition. It’s said the political future was discussed with Naveen Patnaik at a Rashtrapati Bhawan lunch last year, and Mamata Banerjee was then informed over the telephone. This is linked with another lunch in Bhubaneswar in January, ostensibly to launch a biography of Biju Patnaik. The latter’s son’s guests included L.K. Advani, H.D. Deve Gowda and Sitaram Yechury, apart, of course, from Mr Mukherjee. A picture shows the six ageing men engrossed in the food on their plantain leaves.

It’s no secret that Mr Mukherjee hoped to succeed Indira Gandhi in 1984. He has himself confessed that 20 years later he expected Sonia Gandhi to nominate him. In between, he spent seven years in the political wilderness, writing at the end that India held no future outside the Congress fold for a secular, liberal democrat. Citizen Mukherjee — as he calls himself on Twitter — is unlikely to flout that analysis in the twilight of his life. But he is a determined man. As he once joked, his initials — PM — indicate his political destiny. He might achieve it yet as the non-party consensus leader of a coalition ministry of all the talents if 2019 produces a hung Lok Sabha.

The law doesn’t forbid an active political role to a former President. In another world, King Simeon of Bulgaria, who reigned from 1943 to 1946, was the Bulgarian republic’s elected Prime Minister from 2001 to 2005.  The visit to Nagpur may signify “Barkis is willing”.