Sculptor Ian Rank Broadley said he had worked through anecdotes, photographs and documents, and had tried to capture her warmth 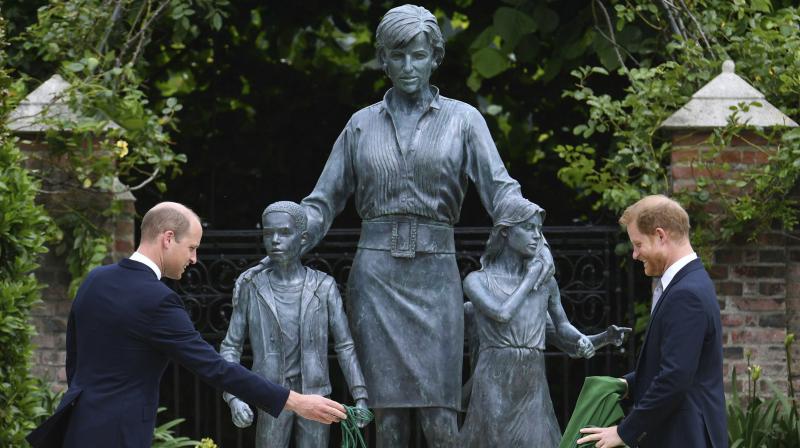 Britain's Prince William, left and Prince Harry unveil a statue they commissioned of their mother Princess Diana, on what woud have been her 60th birthday, in the Sunken Garden at Kensington Palace, London, Thursday July 1, 2021. (AP/PTI)

I guess we will continue to create statues as they will, hopefully, outlive us and tell the future world who our icons were. And, despite the recent protests, during Black Lives Matter, we still feel that it is a means of honouring those who contributed something valuable. But just last week, while the statues of Queen Victoria and Queen Elizabeth II were being yanked down and decapitated in Canada by angry crowds — a brand new statue of another Royal icon, Princess Diana, came up in the UK, to almost-adulation. To be honest, it did not quite look like her — (and for many she resembled the former Prime Minister, Theresa May) — but hey, the sculpture supposedly represented the more charity-oriented Diana. The Diana of the later years. Yet, let us not forget that she died when she was just 36, after a very tumultuous and troubled life.

Her sons who unveiled her sculpture are older now than she was when breathed her last following a car crash in France, and no doubt it was for them a very poignant tribute to a mother who could not really achieve her true potential. In the sculpture, she is surrounded by three children — representative of her impact on future generations. The two princes did not quite bury the hatchet but were nonetheless cordial to each other and while peace did not break out — the statue brought new discussions to this beleaguered nation. Most importantly — did it really look like her?

In any case the sculptor Ian Rank Broadley said he had worked through anecdotes, photographs and documents with both the Princess, and had tried to capture her warmth.

In front of the statue, on the grounds, are words carved out which are based on “The Measure Of A Man”: “These are the units to measure the worth of this woman as a woman regardless of birth. Not ‘What was her station?’ but ‘Had she a heart? How did she play her God-given part?”’

But meanwhile, in Canada — the statues of Queens Victoria and Elizabeth II were pulled down because graves of more than 1,000 indigenous children were found within schools which had been run by the Church. Though neither Victoria nor Elizabeth possibly knew anything about these mass graves — the bitter colonial history of both Canada and the US makes the statues of those representing the controversial past easy targets. Of course, the indigenous children were studying in Church run schools — and apologies are being demanded from the Church.

It has been a nostalgia week in other ways too. After 55 years of heartache and humiliation, England finally beat Germany at soccer. It was way back in the summer of 1966 that England had beaten Germany in the World Cup. In those days the shadows of the Second World War still lingered, and the victory at Wembley with England becoming World champions had meant a lot. Since then, there had been repeated humiliations for the English side. At last there was the taste of sweet victory — and that, too, in the year after Brexit, and during the relaxation of the lockdown with live spectators at Wembley. The thousands of fans at Wembley sang “Sweet Caroline”, Neil Diamond’s classic song, leaving everyone over fifty with a smile on their lips. And, of course, all below fifty as well. Indeed, among the younger generation was Prince George watching his first big game at Wembley. Even his father, William the Duke of Cambridge, who is the Royal Patron for the English league, was seen leaping up when Harry Keane scored the second goal.

Then there was the second comeback of Andy Murray at Wimbledon, as well. The poor man had to drop out due to medical problems but has battled to get back. The English don’t have many Wimbledon champions so although he is Scottish — all of London turned up to cheer him playing and winning at Wimbledon. Looking at the crowds turning up for soccer and tennis, no one would have guessed there had been (and continues to be) a pandemic.

India was part of the battle in a byelection at Batley and Spens in West Yorkshire. This seat was held by Labour traditionally. This was where Jo Cox ,MP, was brutally murdered by a Right Wing terrorist five years ago. The person who succeeded Jo Cox, Tracy Brabin, got elected as Mayor of West Yorkshire. So she resigned her seat as being the mayor of a region is much more powerful than being a backbench MP.

The Labour candidate chosen to replace her was Kim Leadbetter, Jo’s sister (sounds familiar?). Among the election tactics employed, the Labour Party put out a leaflet with a picture of Boris Johnson and Narendra Modi implying that Muslim voters should not vote Conservative because of Modi. There was a huge controversy about this leaflet. George Galloway, formerly a Labour MP, ran on a third party ticket. He took 8,264 votes but came third. As it was said that there were 8,600 Muslim votes in the constituency, it would seem the Muslim voters did not vote Conservative but they did not vote Labour either. The Conservative candidate Ryan Stephenson came second with 12,973 and Kim won with 13,298. The Labour majority fell to a tiny 323 as its vote share fell from 42.7 in the 2020 election to 35.3 now. I guess the one consolation is that a woman came ahead of the men candidates! And she may have saved Keir Starmer, the precariously placed Labour Party leader!