The media space in India is funded primarily by advertising, The reader or viewer pays very little by way of subscription 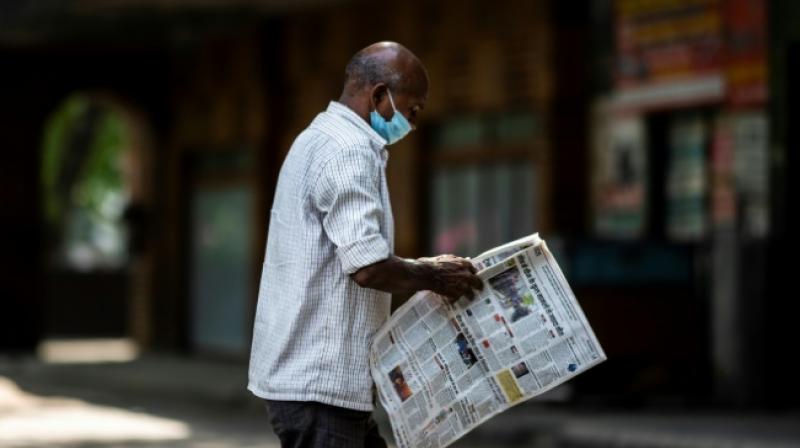 The mainstream media refers to the established houses of journalism, mostly newspapers but to some extent also television.

Newer sources of media like websites or apps that don’t have a physical presence in the form of a printed product or broadcast channel are not yet thought to be mainstream media even though some of them have quite a deep presence.

In India, websites like The Wire and Scroll have been around for about a decade or so and have large readerships.

The media space in India is funded primarily by advertising. The reader or viewer pays very little by way of subscription and our newspapers are the cheapest in the world. But the share of print in the overall advertising pie is shrinking.

In 2019, for the first time, digital jumped over print in India, and by a lot. Digital got 27 per cent of advertising money spent in India, while print got 22 per cent.

Television remained number one at 43 per cent, but both TV and print were expected to shrink further in 2020 and give up share to digital. The Covid crisis has accelerated this process.

We should understand that “digital” means essentially two companies, Google and Facebook, which now take more advertising money in India than the Times of India or Hindustan Times or any other large Indian newspaper. This process will continue, and newspapers will continue to fade away. This trend is visible and is happening before our eyes.

There is a second trend that is also visible and has also come before our eyes. It’s that the media has taken a majoritarian, Hindutva edge.

What is meant by Hindutva or majoritarianism? The idea that one part of society is privileged and entitled to primacy. Conversely, that the others must exist on sufferance and have to be tolerated.

Of course this has happened hand in hand with a change in the political language and narrative of the State in India. During the Congress period, whether or not you agreed with the party, the fact is that the tone and tenor was inclusive. It was not trying to divide Indians on the basis of the background they were born into.

The BJP exists precisely because it was successful at mobilising on the basis of division. It has nothing else that is markedly different from any other party except the fact that it is willing to be openly bigoted.

This view is now mainstream and acceptable in the media. It’s acceptable to blame one religion for spreading a virus that has infected the entire world.

It is fine to look away when members of another religion go ahead with their events despite the same threat of spread.

The media can look away today from the government’s failures at the actual business of governance. The enemy occupies land that 3,000 Indians died fighting to defend in 1962.

But we are being regaled with shlokas about the landing of five warplanes. Are they going to be used to kick the invader out? No, the story is merely that they have arrived.

Last Saturday brought the news that there was 70 per cent more demand for MNREGA work in July 2020 than July 2019. More than three crore households had asked for it, meaning that at least 15 crore Indians were dependent on it. Another piece of news was that the government was considering extending the “moratorium” on defaulting loans.

Companies had been allowed to skip EMIs on their term loans and individuals with house and automobile loans had also been given this opportunity to not pay now and pay with more interest later.

The finance minister said it was possible this facility would be extended because of demand from some sectors that were still, four months after the lockdown began, unable to make their regular payments. Automobile and two-wheeler sales in India have been declining year-on-year for 18 of the last 19 months.

Commercial vehicle sales have not grown since Prime Minister Narendra Modi took office in 2014, meaning that industrial growth has been hammered.
But the media is focused on the suicide of one young man.

The misuse by the Prime Minister’s Office of the Enforcement Directorate even in this matter is not a problem or issue of concern. The story is that people of one religion have captured the entertainment industry.

A decade ago, even though that sentiment might have been felt in large parts of the media, it was not expressed.

There was a reserve and there was a culture that adhered to the principles enshrined in the Constitution. That we were a diverse and secular nation. That has ended now in politics, and it has ended in the media too.

Aakar Patel is a senior journalist and columnist