V Sudarshan | Men in The Castle and J&K's metamorphosis

With Kafkaesque efficiency, our bureaucrats in The Castle have managed not to hold elections, even to panchayats 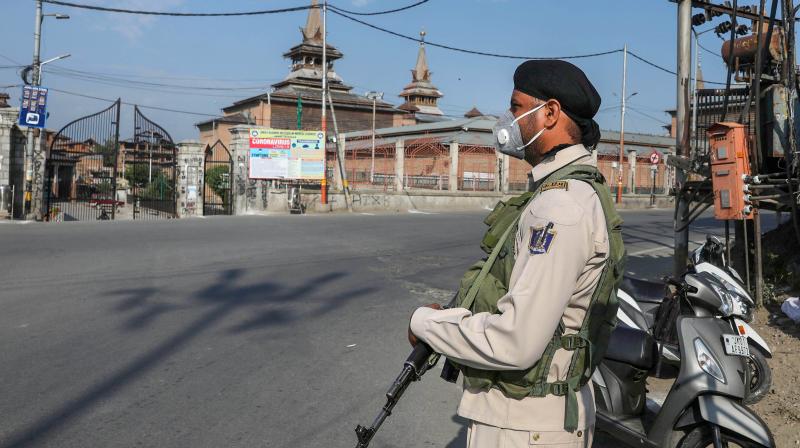 A paramilitary soldier patrols near a checkpoint during a curfew in Srinagar. AFP Photo

A fatuous record it certainly is. And yet, it could be out of a satirical version of Franz Kafka’s incomplete and allegorical novel, The Castle.

In eight days, between January 18 and January 25, 2020, as many as 36 Union ministers visited 60 locations in 12 districts of Jammu and Kashmir and addressed 100 public meetings while inaugurating 210 public projects, probably delivering lengthy monologues to rigged audiences.

And yes, grievance boxes have been placed in each and every panchayat in Jammu and Kashmir. Taken together, they represent the core of New Delhi’s new relationship with the erstwhile Jammu and Kashmir in the year since Article 370 was abrogated.

These are also probably going to be among the talking points of future choreographed visits of foreign diplomats to mark the colossal development strides taken in Jammu and Kashmir.

The real story, however, is quite the opposite. The only politicians who have a free but security-enveloped run of Jammu and Kashmir are the Central ministers, politicians from New Delhi, some of whose official portfolios are much longer than their names but mean little in the new Jammu and Kashmir.

Not the local politicians, even the more mildly offensive in the eyes of New Delhi like Saifuddin Soz, who just the other day impotently peered through concertina wiring to wiggle his finger to demonstrate the complete freedom of his movement.

And yes, New Delhi, hereinafter to be referred to as “The Castle”, now controls Jammu and Kashmir in exactly the same way as Pakistan controls Occupied Kashmir, from Islamabad, through nameless bureaucrats, seemingly eliminating the need for elected representatives.

Kafka’s novel is set in unending winter and most scenes are dark, The Castle bureaucracy unreachable and the protagonist, eerily, is a mysterious character identified simply as “K”, an outsider seeking acceptance.

With Kafkaesque efficiency, our bureaucrats in The Castle have managed not to hold elections, even to panchayats. This of course underscores the absurd importance of having grievance boxes in every panchayat in Jammu and Kashmir.

To prompt a wink-wink reaction from Washington, the Chinese might be well advised take a few pages of this silver-lined playbook’s refinement of democracy and upholding of human rights, to apply to the Uighurs, for instance.

Needless to say, the achievements of the year gone by are unparalleled. In terms of counter-terrorism operations, The Castle appears on top of that beast; in the seven months they have culled as many terrorist recruits as they did in almost all of the previous year.

And yet, despite this everyday demonstration of efficiency, The Castle has been unable to address the alienation and disaffection of the village that lies below, buried deep in the icy drifts in the aftermath of the crude and surgical killing of Article 370.

To the nearly 700 companies of paramilitary forces, comprising CRPF, SSB, ITBP and over a hundred companies of the better-primed Rashtriya Rifles, the supply of cannon fodder seems limitless, visible in the new recruits to militancy, some of vintages as recent as three or four days.

Internally, in terms of political space, there is a vacuum and nothing else, and the tentative voices of erstwhile mainstream politicians from Kashmir, who stand discredited and acknowledge as much, are heavy with humiliation and distress, indicating an aversion to take up any meaningful political activity in this setting, like characters in search of an absurd author who can squeeze electoral sympathy out of their plight. The separatist voices have shrunk to less than disarrayed whispers.

In this scenario, government-ordained politicians can posit no role, not even as comic relief. In this terrible space lurks the risk of radical ideologies, and possibly worse.

On August 5 there will be plenty of evidence of continued motivation from across the border when the Nishan-e-Pakistan is conferred on Syed Ali Shah Geelani to the drumbeat of Pakistan Prime Minister Imran Khan’s visit to PoK, in the form of webinars, Twitterstorms, social media events.
And, yes, at least one university named after the separatist, why not?

The parallels are uncanny elsewhere as well outside the artificial microcosm of Kashmir, where the larger plots have begun writing themselves, somewhat to our chagrin.

From the East to the West our recent neighbourhood initiative, which began with Prime Minister Narendra Modi’s impromptu inviting of all the leaders to his swearing-in in May 2014, seems to have arrived at a critical and enigmatic phase.

The drawbridge is going up, a moat of self-imposed absurdity completes the separation.

In Bangladesh, which we helped liberate, our envoy continues to find difficulty getting an audience with Sheikh Hasina amid protests against our Prime Minister for pushing both the NRC and the CAA, both inimical to Bangladesh, and capable of driving Bangladesh firmly into the Chinese embrace.

It is a squabble a day scene with Nepal now. As we get turfed out of Afghanistan and diplomatically booted out of Iran, there is more likely than not a congruence of both tactical and strategic intent involving a range of countries, especially in the Muslim world, more aligned with the Chinese and Pakistanis, than with New Delhi.
Just because most of the Gulf and Arab nations have not spoken up about the depredations around these contentious issues does not mean they do not have a clear view or are not watching with concern the goings-on.

Any reprieve that we may have got through Covid-19 on the CAA, and even on Kashmir, is temporary and illusory.

The EU remains phlegmatic and focused on its key goals where the lack of various freedoms in Kashmir are concerned. It is not going to change its mind or vote.

Joe Biden, should he come up trumps, has already been conferred the Hilal-e-Pakistan for his yeoman service for promoting friendship with Pakistan.

One year after August 5, 2019, the intransigent military arrival of the Chinese in our part of Ladakh, however helplessly the folks in The Castle spin it with Rafales and so on, is the clearest indication that the world as we wished to know it is no longer the same. At the centre of the faultlines of that new world is a word beginning with K.

Which ending do you think waits to write itself for our K?