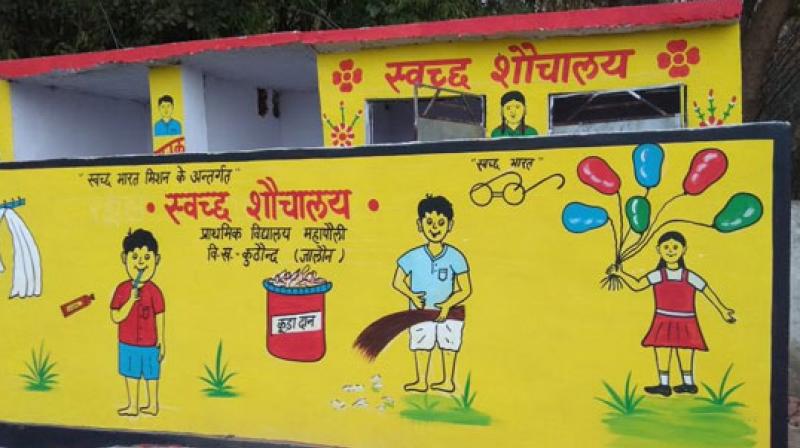 Several states which had declared 100 per cent ODF in March 2018 were found by the survey conducted six months later to not have achieved this. (Photo: Twitter/@Swachh_Jalaun)

India has launched part two of the Swachh Bharat mission and Prime Minister Narendra Modi says that its aim is to make India’s cities garbage-free. While announcing the programme, he was quoted as saying: “The garbage mountains in the cities will be processed and removed completely as part of the Swachta second phase. One such garbage mountain has been in New Delhi for long, it’s also waiting to be removed.”

This focus on littering and rubbish is what separates Swachh Bharat from the two other programmes for sanitation that were run earlier. In 1999, the Atal Behari Vajpayee BJP-NDA government began the Total Sanitation Programme, aimed at providing toilets across the country. In 2012, the programme was called Nirmal Bharat Abhiyan and this was renamed Swachh Bharat Abhiyan in 2014. When it was announced by the Prime Minister, he made all the participants take an oath whose text does not mention toilets and is focused on littering and garbage. On October 2, 2019, all the villages of India were declared 100 per cent open defecation-free (ODF). But a survey released the following month by the National Statistical Office — “Drinking water, sanitation, hygiene and housing conditions in India” — found that 28.7 per cent of all village households had no access to a toilet. Another 3.5 per cent of households had access to a toilet, but didn’t use it. A place is declared ODF when its residents are deemed to have access to a toilet, even if it is a public one. Several states which had declared 100 per cent ODF in March 2018 were found by the survey conducted six months later to not have achieved this. The NSO said that in Gujarat 75.8 per cent, in Maharashtra 78 per cent and in Rajasthan 65.8 per cent of rural households had access to any type of toilet — whether personal, communal or paid — though all three states had been declared ODF by the government. Madhya Pradesh had been declared ODF with only 71 per cent of households having access, while in rural Tamil Nadu access was only 62.8 per cent.

A survey done first in 2014 and then in 2018 by the IZA Institute of Labour Economics found that the number of people who had access to some type of toilet but still defecated in the open was constant between 2014 and 2018 at 23 per cent. The study found that at least 43 per cent of rural people in the states they surveyed — Bihar, Madhya Pradesh, Rajasthan, Uttar Pradesh — continued to defecate in the open.

One of the issues faced was that toilets were constructed but had no running water, rendering them unusable. This was caused by a mismatch of resources. In 2016-17, Swacch Bharat received about Rs 14,000 crore but rural water infrastructure received only Rs 6,000 crore. The water resources ministry estimated that a household needed a total of 40 litres of water a day, of which 15 to 20 litres was for sanitation. But even a well-supplied rural household received only between eight and 10 litres of water a day, and that was used up for cooking, drinking and washing, with sanitisation being the last priority. And many villages had no access to piped water at all. Why should there have been a focus on sanitation and not on littering or garbage? It is because the absence of sanitation affects the health of children. The National Family Health Survey 2019-20 revealed some awful numbers. On four key metrics which represent the nutritional status of children, states recorded a significant fall in 2019-20 compared to the levels in 2015-16. In states like Gujarat, Maharashtra and West Bengal, the share of anaemic and wasted (low weight for height) children was significantly higher than the levels seen 15 years earlier in 2005-06. This indicated a reversal of progress that had been hard to win. Even in states such as Kerala, which continued to lead in these indicators, the levels recorded in 2019-20 were poorer than the 2015-16 figures. The survey put out data for 22 states and Union Territories and an analysis of 10 major states was conducted. Anaemia among children was higher in all the 10 states in 2019-20 compared to 2015-16. In Gujarat, Himachal Pradesh, Maharashtra and West Bengal, a higher percentage of children were anaemic in 2019-20 than were in 2005-06. The percentage of wasted (low weight for height) children was higher in half of the 10 states. In Assam, Gujarat, Karnataka, Maharashtra and West Bengal, a higher percentage of children were wasted in 2019-20 compared to 2005-06. In seven of the 10 states analysed, a higher percentage of children were underweight (low weight for age) in 2019-20 compared to 2015-16. Stunting (low height for age) was higher in six out of the 10 states compared to 2015-16.

The study also found that incident of diarrhoea had increased in half the states, including AP, Bihar, Gujarat, Maharashtra, Karnataka and West Bengal. In Bihar it was up from 10.4 per cent in 2015-16 to 13.7 per cent in 2019-20. In 2021 the programme has been renamed Swachh Bharat 2.0, to continue till 2026 with a focus now on cities. But the initial campaign launched with little focus on its true objective (the health of children) appeared to have delivered on October 2, 2019 the reversal of that objective. And now we have moved to part two of the campaign, once again with a focus on the visual and aesthetic aspects, meaning garbage and littering, rather than on sanitation and hygiene.