Who is Rihanna to us? Had her tweet been ignored, we would not have attracted even more global scrutiny 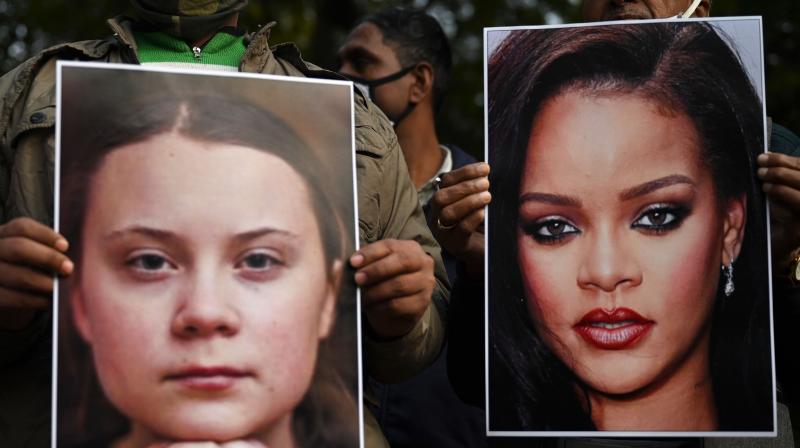 If VVIP Bharatwaasis did not step up publicly and lecture us on our duty as citizens, their bag of sarkari goodies would be snatched away. (Photo:AFP)

I was in salubrious Goa, desperately trying to dodge zillions of Dilliwallas who have as good as taken over this gorgeous state and established their own “klonies” across favoured villages and hamlets. Poor Goans, I thought to myself. First came the Israelis, then the Russians -- and now these! Arpora has become a mini-Gurgaon, and the locals aren’t amused. In such a surrealistic setting, it was a bit tough for me to focus on a single tweet posted by a Barbados-born singer and the havoc it generated across India.  Well, I’m getting carried away -- it was Dilli netas and assorted celebrities/influencers who jumped in, and boom! Rihanna went viral. Be honest -- how many of you reading this column had even heard of Rihana before this hungama? Okay -- maybe, you had heard her. And even danced to her tracks, but did Rihanna and what she tweeted impact your life even remotely? No, na? I recall enjoying Under my umbrella, which brought Rihanna into the global stage way back in 2007. After that, I totally forgot all about her.

Now, I am unlikely to forget! The 32-year-old singer with a staggering 100 million followers on Instagram. No wonder our netas got sufficiently hilaaoed and obviously rattled, when she had the gumption to tweet in support of our protesting farmers. More than 226.3K retweets followed, with 490.3K users “liking” the tweet. Whoa! What was going on?

Uske baad, that opinionated Greta what’s- her- face, got into the act and lagaoed her own tweet. Mayhem followed as all desi patriots scrambled to counterattack these impudent folks who had dared to question our official stand on the farmers’ protests. People who had absolutely nothing to do with either the farmers or the government, jumped in feet first to damn and attack the global “influencers”, accusing them of generating an international conspiracy designed to break up our vast country and hand it over to China!

Stumped? So was I … as it is, the sultry Goan weather had started to play tricks with my mood and thinking (without feni, let me hastily clarify), upar se… I was going through zabardast tweets posted by super-patriotic Indians, basically asking Rihanna and Co to butt out of India’s affairs. Someone brilliant called Sambit Patra (know him?) thundered on a bigoted/compromised television channel: “Why doesn’t Rihanna tweet about the 1984 riots?” Excellent question, Shri Patra. But the singer was born in 1988 and Twitter started only in 2006. Koi baat nahi -- loyalty game fully on, even if the goof-ups are totally embarrassing. So much for credibility. Hot air has its uses when the audience itself is grossly uninformed.

Confession: I am pretty clueless myself. But when I read accounts of two elderly fauji farmers (Jeet Singh, 70, and Gurmukh Singh, 80) being picked up by the Delhi police as suspects, charged with an act of violence (FIR No. 31) they were allegedly a part of … nothing makes sense! Lodged in Tihar Jail, the two men who had served the Army for over two decades in the same Sikh Regiment, dealing with this strange situation that their traumatised families can do little about. Jeet Singh’s son Veer works as a guard. He said: “Our fathers fought for India in their youth. The government has disrespected them by putting such veterans in jail.” The two farmers own an acre of farmland each, on which they grow wheat. Today, they are languishing in jail and being called “Khalistanis” and “terrorists”. Rihanna sang Unapologetic in 2012. You go figure who deserves an apology in this case.

Soon, everybody had jumped in to express their two bits’ worth. I saved my gyaan and stayed out -- savouring grilled calamari at a beach shack seemed a far more worthwhile pursuit. I thought lazily and idly to myself, trying hard not to get distracted by the over-dressed Gurgaon crowd swigging beer at the next table: “Why is everybody frothing at the mouth and dissing Rihanna?” Then I remembered. If VVIP Bharatwaasis did not step up publicly and lecture us on our duty as citizens (“call out Rihanna, tell her not to meddle in India’s affairs, let the world know we can handle our own internal matters…”), their bag of sarkari goodies would be snatched away. The more relevant counter-question to all those big names who have passed the patriotic test with flying colours -- did even one of them understand the highly complex farmers’ problem? Frankly, it beats most analysts. Without getting to the bottom of what is nothing short of an unfortunate impasse at the moment, why ignite more fires? Who is Rihanna to us? Had her tweet been ignored, we would not have attracted even more global scrutiny -- it was as if the entire government machinery at the time was busy dealing with a famous foreign entertainer’s tweet!

Most super celebrities hire PR teams to manage social media accounts and project a finely calibrated public image. Perhaps Rihanna does indeed possess remarkable understanding of complicated political, social and cultural issues in distant lands she may never ever set foot in (unless the money is good, of course). But the chances are, she goes along with whatever her alert and socially aware PR team places before her. In simple words, it is shrewd brand building. It shows her as a thinking star concerned with humanity. That’s it! Yes, a tweet from such an individual does snowball into a bigger controversy, if it catches on -- like it did this time. These are the expected repercussions in the age of celebrity -- deal with them wisely, as a government. By falling into the trap, we fed the monster and kept the story alive. Mogambo is very naraaz, okay? Get smart, you guys. Focus on asli matters. Rihanna’s other hit was titled: “Bitch, better have my money…” She has made hers. The “bitch” has delivered. Where does that leave us? Still roping in celebrities to counter Rihanna! Hello! She has moved on, okay? She is probably tweeting about saving endangered dolphins in some remote bay. Such bewakoofi, I tell you!