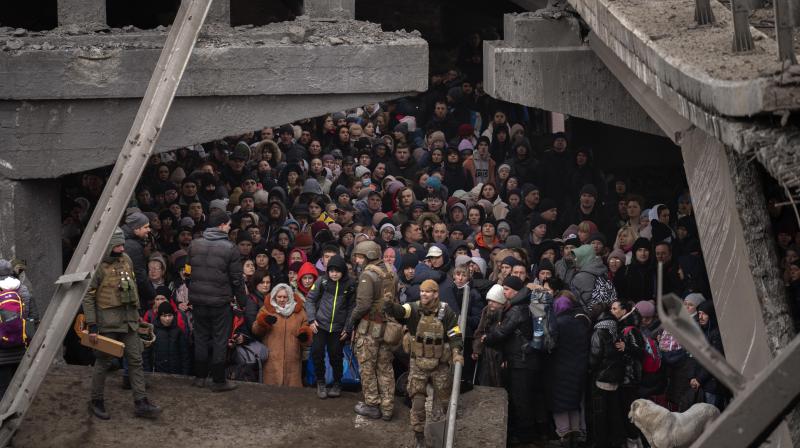 Ukrainians crowd under a destroyed bridge as they try to flee crossing the Irpin river in the outskirts of Kyiv, Ukraine, Saturday, March 5, 2022. (AP)

The crisis in Ukraine must be viewed at two levels. At one level, it is a brazen invasion by Russia of a sovereign country, in contravention of prevailing international law, and a rules-based international order. At another, it is a symptom of much deeper and complex geopolitical phenomena. It involves the unresolved agenda of the post-Cold War world, and the unfinished business of building a new security architecture of Europe. It is also reflective of the critical fault lines that are likely to emerge if countries are unwilling to accept the emergence of a multi-polar world.

The end of the Cold War, the falling of the Berlin Wall, the reunification of Germany, and the disintegration of the Soviet Union, seemed to indicate the triumph of liberal democracies, and the emergence of a new world order whose unchallenged protector was the United States of America. The USA actually believed this, and assumed the role of a global policeman to enforce a political conformity that was congruent not only to its “values” but also to its national interests. In this enterprise it was aided and abetted by its traditional allies in Europe, original members of Nato, and by Japan.

This led to a great deal of unethical unilateralism in foreign policy. Iraq was invaded on the suspicion — later proven unfounded — that it had weapons of mass destruction; one million Iraqis lost their lives; Afghanistan was taken over; Syria was fair game; Libya was attacked; Serbia was relentlessly bombed, and a new country — Kosovo — was carved out. Countries were attacked and pulverised at will, in the name of preserving the security and endurance of a global world order that corresponded to what the US and Nato deemed was appropriate. The assumption behind this unilateralism was that Russia was too weakened by the demise of the Communist bloc and the collapse of the Soviet Union to be a global player. A second assumption was that China was still not a power sufficiently strong to challenge US predominance.

Both assumptions were wrong, and have led to disastrous and unforeseen consequences. In Europe, the US spearheaded the relentless expansion of Nato to the borders of Russia. Fourteen countries joined it after the end of the Cold War, including the Baltic states, Poland, Hungary and Romania. This was against the express assurance given to the Soviet Union, and to Russia as its successor state, that Nato will not pose a threat to it. Ukraine, in the very underbelly of Russia, was the last frontier that Russia could not allow Nato to cross. The warnings from Russia that it will not allow this to happen went unheeded. In 2014, the US was complicit in a coup in Ukraine for a regime change that brought to power a pro-West leader to the helm. The US happily conflated Nato with the appeal of democracy, and contrasted this with Russia’s authoritarian and undemocratic regime. But Nato is not some kind of benevolent democratic club. It is a military grouping designed to strike any country it considers to be its adversary. When Russia invaded Ukraine, the US was surprised that Russia was not willing to roll over and quietly accept being further encircled.

Grudgingly, the US is also realising that China is not a walkover. The Dragon power’s intimidatory tactics in the Indo-Pacific, its dogged refusal to accept the independence of Taiwan, its global economic clout, its imperialist aspirations through projects like the transnational road initiative, and its belligerence on the borders of India, clearly indicate a challenge to a global order of which the US assumes it is the only arbiter. If the invasion of Ukraine has resulted as a consequence of the US’s flawed assumptions about Russia, another crisis is very likely to erupt in the future as a result of Uncle Sam’s erroneous appraisal of China.

It is delusional to believe that powerful countries do not carve out spheres of influence as dictated by their national security interests.  The US outlined the right to do so as far back as 1823 when the Monroe Doctrine was pronounced.

According to it, the US would consider it a threat to its security interests if any European power sought to achieve conquest or domination in the American continent. Since then, the US has never abdicated this proprietary right. In 1962, it prevented the Soviet Union from planting nuclear missiles in Cuba, against the sovereign request of the latter. Nato is an extension of the US’s attempts to expand its security sphere of influence. If the US has this right, how can it be denied to Russia? Even India, is vigilant about hostile powers transgressing into areas that are part of its security buffer. I have been Ambassador of India in Bhutan, and one of our principal concerns is that China should not establish an offensive military presence in Bhutan, a country with whom, fortunately, we have the best of relations.

None of the above justifies the invasion of Ukraine by Russia. But it is important to understand the complex reasons why this happened. In this process, both the accused and the accuser are guilty. Now, the immediate priority must be to end the war, impose a ceasefire, and allow dialogue to re-establish peace in Ukraine. Obviously, Russia did not anticipate the degree of resistance Ukraine would put up. This has expanded the scale of destruction and loss of lives. As threats of nuclear retaliation are being bandied about, and Western sanctions threaten an unprecedented global economic crisis so soon after the Covid pandemic, the time has come to prevent the situation from deteriorating further.

Russia must tone down its belligerence and end the war as soon as possible. Then, the US and Nato and Russia must get down to rebuilding a new post-Cold War architecture of security for Europe; and finally, the US and Nato, in particular, must understand the reality of a multi-polar world in which their hitherto diplomatic and military unilateralism cannot succeed.