Pavan K Varma: Why didn’t the PM focus on steps to help the needy? 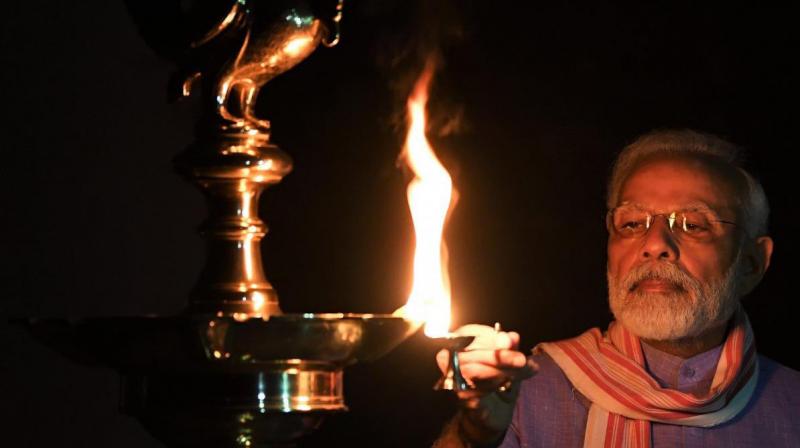 This image posted on prime minister Narendra Modi's Twitter account shows him lighting an oil lamp to mark the country's fight against the Covid-19 pandemic on Sunday, April 5, 2020.(AP/Twitter)

At 9 pm on Sunday, many Indians responded to prime minister Narendra Modi’s call to shut their lights and light a candle, diya or even a mobile flashlight for nine minutes to display solidarity with the nationwide struggle against the Covid-19 pandemic. The call had a symbolic value in reinforcing national resolve, and no doubt gave most citizens a sense of hope and confidence.

But it is sobering to remember that many citizens were not at home, did not have a threshold or a balcony. They were on the road or in makeshift shelters, without having eaten a proper meal for days, and with no money -- not even to buy a candle. They were mute spectators to middle class and affluent Indians illuminating India, but indistinguishable from the engulfing darkness all around, wondering how they were going to survive the next day.

According to the government’s latest Labour Force Survey, some 127 million people are self-employed, casual labour or informal workers, with no social security safety net. Once the lockdown was announced, they became the nowhere people, caught in a nightmare between where they stayed and their original homes -- where they wanted to go. If they stayed where they were, they would die of starvation.  But if they wanted to go back and try and survive from where they had migrated, there were no means. Trains and buses were not running, and police blockades prevented them from even walking all the way.

This is the ugly underbelly of our socioeconomic system. But for the fact that their services are essential, the relatively privileged would be happy if they just did not exist. However, the fact is that they do, and their plight should have been part of the planning that preceded the prime minister’s announcement of the lockdown with only four hours of notice. It is true that in extraordinary times, the choices are not easy. The PM was certainly decisive in taking the decision for a drastic step like a three-week total lockdown. But he should have been better prepared to handle the inevitable consequences of such a decision on a country with such vast economic discrepancies like ours. In the days after the lockdown, the country was witness to lakhs of migrant workers and others on the roads, walking with their families and meagre belongings, swamping bus stands, and making a mockery of the concept of 'social distancing' which was the primary purpose of the lockdown.

The government has announced an economic package to help the poor. But given the magnitude of distress, it is highly inadequate. Of the roughly Rs 1.7 lakh crore announced, Rs 70,000 crore is part of the existing allocations. The additionality is thus only of about Rs 1 lakh crore, which is much less than even one per cent of the government’s budget. Other countries, such as the United States, have allocated as much as 10 per cent of the government’s budget to help the needy. There is also the question of delivery. Direct Bank Transfer (DBT) will help, given the number of Jan Dhan accounts, but there are still some 190 million Indians who still do not have a bank account. Besides, how will the additional allocation of rations reach the beneficiaries, since the entire transport network across the country is in total disarray?

Greater planning should also have been seen in the movement of essential goods. More than half of the 12 million trucks on the highways have been arbitrarily stopped for carrying non-essential goods. As Prof. Deepak Nayyar writes: “Many truck drivers have abandoned their trucks and left. Insufficient supplies, exacerbated by hoarding, are already driving up prices of necessities, imposing a disproportionate burden on the poor.”

And where's the PPE?

It would also have been nice to hear from our Prime Minister -- even as he spoke eloquently about candles and diyas -- about what progress has been made in upgrading our woefully inadequate health infrastructure. Our health workers are doing their valiant best, but they need far more personal protective equipment (PPE) for their own safety. We need far more testing kits, hospital beds, and ventilators. More testing is the key to accurately establish the number of those affected by the virus. Only this will enable more effective and extensive quarantining. The government has been applying its mind to these issues. Some progress has been made, including through vital public-private partnerships, which should be aggressively encouraged while keeping a strict eye on quality. If the PM would have briefed the nation in his address on such matters, it may have instilled as much confidence and solidarity as merely the symbolic act of lighting a candle and switching off the lights.

There is also the question of providing adequate resources to the state governments. Ultimately, in a national riposte to this challenge, the federal structure of our polity will have to be fully involved. But many chief ministers have complained that -- among other dues -- their GST payments which are due have not been made yet, and this is hindering their relief efforts.

It is good to have a Prime Minister who can evoke symbolism in the goal of greater national solidarity. Such solidarity is important in building collective national resolve to face this unprecedented challenge. But it might have been better if, in addition to the call to light candles, our PM had also spelt out concretely what the government had done so far, what its vision was for the future, and what more it could do to help the poor, the needy and the marginalised.