Sunil Gatade | PK’s gameplan: Won’t be on sidelines for Battle of 2024 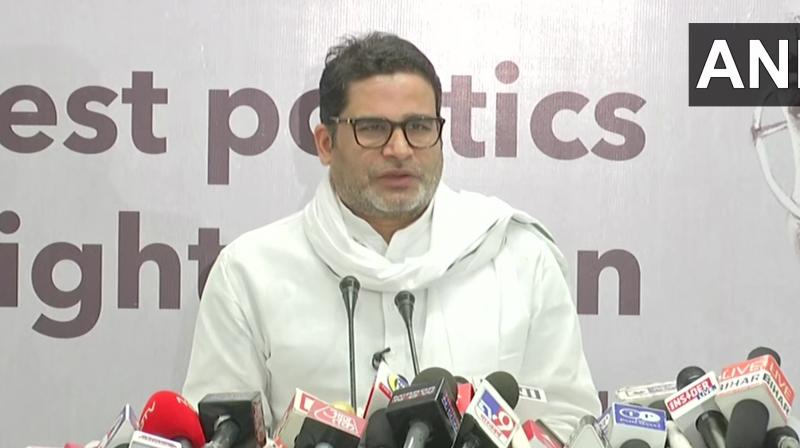 Prashant Kishor’s latest announcement that he has no immediate plans to start a political party from his home turf of Bihar but will be going on a 3,000-km padayatra from October 2 reflects the cautiousness of an electoral strategist before taking the final plunge.

On the national level, it also shows things didn’t work out his way in the Congress revival project, leading to a parting of ways with the Grand Old Party. Electoral strategists like Mr Kishor like to have things their way. But for a party like the Congress, it is impossible to accept the premise of “my way or the highway”!

While at present it is advantage BJP, sometimes one week can be a long time in politics. How far the road to New Delhi will be smooth or bumpy for the rival contestants would be known from the way the wicket would turn out in a dozen-odd state Assembly polls preceding it.

For the beleaguered Congress, the message is that if it truly implements Mr Kishor’s “transformational reforms”, it will be able to face the situation when Prime Minister Modi sets the BJP’s aggressive election machinery in poll mode for a hat-trick to capture New Delhi after his spectacular victories of 2014 and 2019.

Mr Kishor’s parting of ways with the Congress before the revival project could even take off had been another shock as the loss of power in Punjab and the dismal show in Uttar Pradesh and Uttarakhand have put more than a question mark over the political acumen of Rahul Gandhi and Priyanka Gandhi Vadra and their wayward methods of running the organisation.

It had appeared Mr Kishor was more than a necessity for the Congress, which had floundered in every which way. In a way, involving Mr Kishor in Congress affairs was like referring a sick industrial unit to the BIFR.

In politics, there is always a “Plan B”, and there must be one for parties like the Congress that are virtually fighting for survival. Congress leaders like Rajasthan CM Ashok Gehlot had hailed Mr Kishor as a “big brand” whose expertise was needed for the turnaround plan. The Congress’ brainstorming session at Udaipur later this month is timely, to generate new ideas at such a crucial juncture.

Some time ago Mr Kishor had made it clear “the IDEA and SPACE that #Congress represents is vital for a strong Opposition”. He went on: “But Congress’ leadership is not the DIVINE RIGHT of an individual especially, when the party has lost more than 90% elections in last 10 years. Let Opposition leadership be decided democratically”.

While parting ways, Mr Kishor had said what the Congress really needs is leadership. Rahul Gandhi has to prove him wrong by decisively scuttling a hat-trick by Mr Modi. No political pundit is needed to predict that if the Congress fails to fight like hell, it will face doom. Time will tell whether the Congress can rise to the occasion when the Opposition space is not only divided, but despondency has set in.

On Bihar, Mr Kishor sees an opportunity for a new outfit given the state’s backwardness for the past 30 years despite being ruled by Lalu Prasad Yadav and Nitish Kumar. The state that launched Jayaprakash Narayan’s “Total Revolution” in the 1970s is now in a shambles.

Mr Kishor’s press conference on Thursday has given the clearest signal yet that the strategist who helped shape a number of electoral victories, right from Narendra Modi’s 2014 Lok Sabha triumph, is no longer ready to look at the game from the sidelines.

After what he himself described as his “rollercoaster ride”, virtually from Kashmir to Kanyakumari over the past decade as a political adviser, he was bound to take the next step of plunging directly into politics. Mr Kishor will not admit it, but he has seen from close quarters the rise of Arvind Kejriwal and the AAP in the past decade from an anti-corruption movement led by Anna Hazare.

“The best politics is right action”, Mahatma Gandhi had once said. It is a favourite quote of Mr Kishor. He has embarked upon what he feels as the “right action” at the moment. If Mr Kishor can make his political foray work, perhaps it would be the first example in democratic India that a political consultant would be wearing the hat of a leader.

What is of significance is that a political consultant is daring to enter in the rough and tumble world of politics irrespective of the consequences. When politics is becoming more sectarian for immediate gains, the ventures of men like Mr Kishor will evince interest in India and abroad and could help show the way ahead. Though economically backward, Bihar is politically one of the most enlightened states of India. How much the padayatra could help the political consultant to turn into a leader will be known soon. The India of the 21st century needs a 21st century thought.

Starting such ventures do have their own drawbacks. While the AAP has succeeded, it does not mean every such venture will succeed. It is almost like a start-up. One of the AAP’s founders, Yogendra Yadav, launched his own outfit after being expelled from the party, but it is yet to gain any real momentum.

Mr Kishor will be busy with his own game in Bihar for a while to get his political venture going. But he is too ambitious a person to restrict his activities to just one state. One thing is clear though: Mr Kishor’s stature as a political strategist par excellence will be confirmed only if he can ensure a non-BJP combine at the Centre after 2024 -- a tall order indeed. Narendra Modi and Amit Shah have worked with him earlier, but they don’t need him any longer. For now, they look invincible. But tomorrow is another day.