Kishwar Desai | Canny Carrie’s thrifty choice; a princess by any other name

Already there is talk that the Freedom Day may be shifted to July 5, so it is getting more and more difficult to plan too far in advance 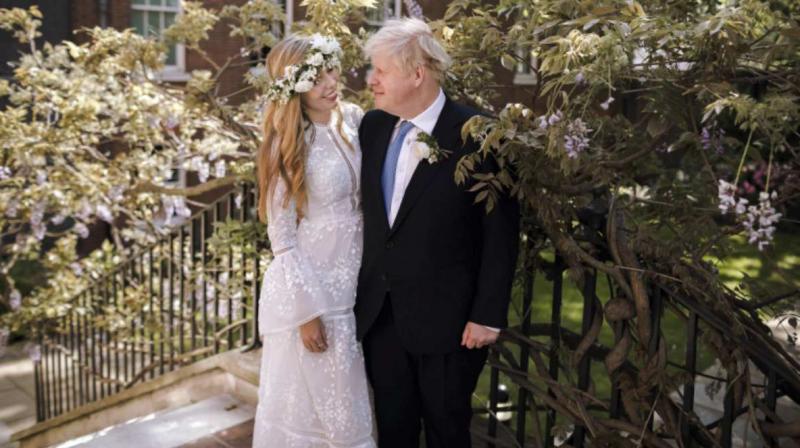 The ceremony on the Bank Holiday weekend had only a few family members attending — amid claims that even the Prime Minister’s children from his previous marriages/relationships were not invited. (AP)

Freedom day is supposed to be June 21, and we are longing to get out of this cycle of lockdowns. But of course, things can never be so simple when you are dealing with a mutating virus. Will we actually be able to walk out on that day and do what we used to before the virus attack last year? Or will Freedom day arrive with a set of rules once again? There is a scramble to get as many vaccinated as possible — and particularly the 18 plus. It is possible that the time between the two vaccines might be reduced from 12 to eight weeks.

Everything depends on the number of infections of course. One can only hope! Already there is talk that the Freedom Day may be shifted to July 5, so it is getting more and more difficult to plan too far in advance.

Canny, clever Carrie Symonds has once again come up with a winning strategy to deflect any criticism against her. She organised her own “surprise wedding” at the beautiful Westminster Cathedral — and to ensure that this would be the much-married Prime Minister’s final nuptial ceremony, it was a Catholic ceremony, as in the Catholic faith divorces are practically impossible. For someone who had been a live-in girlfriend and an “unwed” mother — this “ return to the Church” private ceremony was sufficiently old fashioned to melt the hardest hearts.

I must confess that I have always liked her spunk, and the fact that she can outwit most other people. To throw everyone off the scent, she had sent out “save-the-date” invitations for next year just earlier last month — so that the media would think that the wedding would be much later. The ceremony on the Bank Holiday weekend had only a few family members attending — amid claims that even the Prime Minister’s children from his previous marriages/relationships were not invited.

But the real game changer was the long white dress that the bride wore. As always, the moment the photographs were published, fashionistas began their research and it was discovered that this was a dress which cost a little less than 3,000 pounds. But within minutes, all dresses, of all sizes, in that style were immediately sold out. And then — there was yet another surprise! Carrie, herself, had not bought the dress — she had merely hired it! All for £45, for a few days from a website, My Wardrobe HQ. The company later said that since she often hires clothes from them, no red alerts flashed when she asked for this dress.

That is the smartest thing she has ever done, especially after the impression some in the media have been trying to create that the newlyweds were living beyond their means, often requesting rich donors to support them, be it holidays or refurbishments. But this was thrifty move. And that made one wonder why so many of us have always thought of getting a brand new wedding dress (or in my case, saree) — when in reality you only wear it once!

Taking the idea forward, she has also (if media reports can be believed) hired more formal dresses and coats for the G7 summit! Let us hope they once again publish the hiring rates — as this will certainly lead to decreased unnecessary consumption, and maybe reversal of climate change!

While the dress created its own media frenzy — many people were wondering how did the PM manage to convince the Church that his previous marriages did not matter, and he could be married in a Catholic ceremony?

And meanwhile, the terrible two, Harry and Meghan, the Duke and Duchess of Sussex still managed to remain in the news. Their move to the US has made not a jot of difference, to the British media. This time the excitement is over their second child, a daughter — expected to arrive this week. So the race for guessing-the-name has begun, with bets being placed in two countries, the UK and the US. The most popular choice seems to be Diana (after Harry’s late mother) but it could also be Pip, to honour Prince Philip, who recently passed away. The baby may also arrive on Prince Philip’s birthday. Another popular choice is Lily, after the Queen. The latter two are certainly unconventional names. But then what can you expect from a couple who names their first child “Archie”? Perhaps they would like to create a bridge of names between UK and the US.