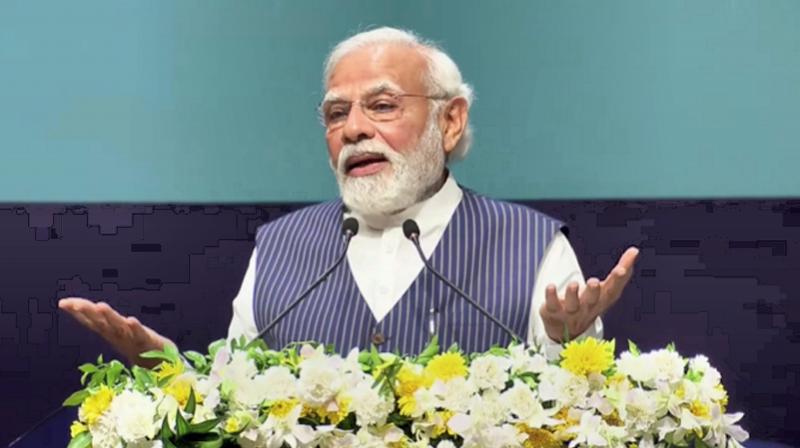 Nothing is insignificant when a political party, especially the world’s largest as India’s ruling BJP claims to be, holds a two-day full-fledged meeting of all functionaries, where its leader with his undiminished popularity among bhakts and voters is part of the process of delivering a political resolution that will the blueprint for state Assembly elections up to 2024 and the Lok Sabha vote.

The combination of location, venue, speakers, issues, directives and strategy were intended to signal where and how the BJP was going to achieve its goal of a unified nation and a unitary political system.

The choice of Hyderabad, that became “Bhagyanagar” in Prime Minister Narendra Modi’s speech, which was the location of the meeting, is now marked for the BJP as the next territory that it must acquire in its race to represent the whole of India and put in place a “double-engine sarkar”.

Having successfully occupied the west coast, from Gujarat down to Karnataka, with the recent addition of Maharashtra, the absence of the lotus as the ruling icon on the east coast is a challenge for the BJP.

It is not in power in West Bengal, Odisha, Andhra Pradesh and Tamil Nadu. Establishing “One Nation-One Party” as the fulfillment of its ideological and political dream of remaking India in the image of a Hindu Rashtra is a target that Narendra Modi wants to reach as soon as possible. The recent party meeting checked all the boxes on how the dream would be made real.

Narendra Modi’s role and message was consolidation. As a leader and messiah of the middle ground, Mr Modi talked good governance and inclusion, of the minorities and the marginalised, positioning himself as the only alternative to a dysfunctional Opposition. Like a good cop, he talked inclusivity, promising that the marginalised and those left behind by the neglect of earlier governments would be brought into the mainstream. The BJP represented the masses, unlike the Opposition, which was composed of self-serving dynasties; showcasing the choice of Droupadi Murmu, a tribal and a woman, as India’s next President was proof of the BJP pudding that voters in places where the party is still in the Opposition should note and choose in the next election.

The need to deliver a message that was masterly in its ambiguity, because it was open to multiple interpretations by different segments of voters with different concerns, is important for Mr Modi. He is fully aware that there is a watchful and critical audience not only inside India, but around the world that has stepped up its vigilance on how he governs a country that is multi-religious, multi-ethnic, multi-lingual and socially and politically diverse, beset with escalating economic crises. To sustain the narrative that his government has succeeded in lifting India’s global standing and his role as a global leader, hugged and welcomed by the top ten world economies, Mr Modi has to be heard making the right noises.

That Mr Modi could not bring himself to say anything at all about the fast-spreading wildfire of communal incidents and nor could he bring himself to condemn the loose-tongued spokespersons of the BJP, like the suspended Nupur Sharma, may not matter much to significantly vast voters from among the approximately 80 percent Hindus in India, but it does matter to an external global audience and to an internal audience of moderate voters unhappy about many things, from the crisis of jobs, plunging incomes, rising inflation, divisions and tensions within multi-religious local communities.

The inclusivity and development mantra invoked by Mr Modi was clearly aimed at appeasing the apprehensive among the voters, who have voted for the BJP in the past in the expectation of change. As Prime Minister, Mr Modi knows he has to appear to draw a boundary between the BJP as the political arm and his government as the executive apparatus of a polity that is vertiginously diverse, where every individual has multiple identities, not just the one religious identity on which the Hindutva politics of his party is constructed.

In contrast, mastermind and strategy wizard Amit Shah’s far more direct and selective categorisations of the “greatest sins,” as “dynastic politics, casteism and politics of appeasement” constructed by political parties and regimes to create divisions between communities as part of the politics of vote banks, was a call to party leaders and workers down the line to gear up for the next phases of state Assembly elections. Stopping short of pitching it as the next half-century, Mr Shah told the party exactly what it must do, establish India as the “vishwa guru” of the international community by consolidating power for the next 30 to 40 years which would be the “era” of the BJP.

Mr Shah clearly sent out a call to young voters, the so-called “Agnipath” generation, that the BJP intended to remain in power for decades to come. It would, therefore, be politic to remain on the side of the Sangh Parivar rather than oppose it. He promised jobs and development in exchange for allegiance. The speech was an invitation to the aggrieved voter to undertake a cost-benefit analysis of what the future would be. It was also a message that there were able successors to Mr Modi, who would lead a BJP government whenever it became necessary.

The reference to appeasement as non-viable politics is also a message that the party was no longer coy about the status of minorities vis-a-vis the Hindu majority. Ironically, the BJP’s pet target, Jawaharlal Nehru, delivered some of his most ardent appeals for establishing secularism as a principle and foundation for a peaceful polity in the context of Hyderabad, where communal confrontation had touched dangerous levels; he wrote: “It is for us now… (to) produce the sense of absolute security in the minds of Muslims and other minorities.” Nehru went on to say: “The majority always owes a duty of this kind to the minorities.” He enjoined the government from permitting “individuals or groups to take the law into their hands, especially at a moment of national crisis”.

The contrast between Nehru, India’s first PM, and Mr Modi is stark. Nehru spoke and wrote over and over again about “horrible things”, meaning killings, clashes and riots, forced migrations and internal displacements in the context of communal violence. Mr Modi, even when he had a platform where he was speaking to his party, was significantly silent. Mr Modi’s first two terms were tentative explorations; the next phase will be an expedition to establish the new era.