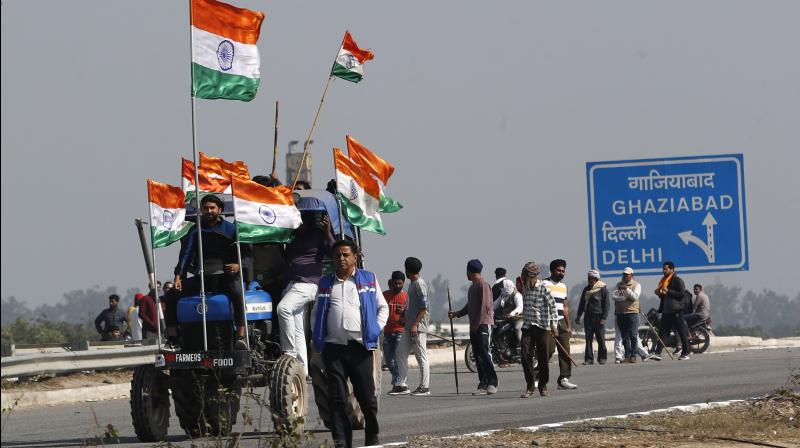 In a democracy there will be protests. Such protests, if they are allowed to linger on for so long, will attract global attention. (AP/Manish Swarup)

In the days leading to the infamous declaration of the Emergency in 1975, PM Indira Gandhi, flush from her victory over Pakistan and the creation of Bangladesh in 1971, was showing signs of becoming increasingly autocratic. She was impatient about dissent, convinced of her own invincibility, and adamant about pursuing what she thought was good for the country irrespective of what the Opposition was saying. It was then that the theory of the “foreign hand” gained currency. She resorted to the not-unfamiliar stratagem of conflating all internal dissent as the manifestation of a conspiracy against her regime from abroad; “CIA agents”, began to proliferate, and Opposition leaders, and those who had the temerity to oppose her, were seen as puppets playing to a conspiracy orchestrated by international powers.

A similar stratagem seems to be at play today. Undoubtedly, the sovereignty of our country is paramount, and we must ceaselessly be vigilant against outside powers that seek to destabilise it. But do Rihanna and Greta Thunberg qualify to pose such a threat? Greta is a Swedish environmentalist activist not yet out of her teens; Rihanna is a celebrity singer-actor, who has sales of 250 million records worldwide, and is considered one of the most successful music artistes of all time. Both of them have been involved in social activism. Greta’s environmental evangelism has won her global recognition. Rihanna is known for her involvement in humanitarian causes, and has been vocal against police brutality in America against the blacks.

Since the “foreign hand” of Indira Gandhi’s days, the world has changed. Social media, and the global footprint of media and especially television, has inter-connected people in a way never seen before. News in any part of the world becomes instantaneously news everywhere. Our government appears to be making the cardinal mistake of using the paranoia of the “foreign hand” in today’s world when so much has irrevocably changed. Social media celebrities, with hundreds of millions of followers on Twitter and Instagram, post comments on anything and everything as a matter of routine. Social media platforms are full of posts against the arrest of Russian Opposition leader Alexei Navalny by Vladimir Putin’s dictatorial regime; against the attack on Capitol Hill by Donald Trump’s hooligans; against China’s undemocratic clampdown on dissidents; and against Saudi Arabia’s intolerant Wahabi state — to name but a few subjects.

We are proud of India’s democratic credentials, but if a farmers’ protest on the borders of the capital of our country continues for over two months, with some 150 farmers dying in the bitter cold, it is bound to attract media attention worldwide. The government may be right in believing in agrarian reforms, but there is little doubt that the manner in which the bills were passed was undemocratic, and was unpreceded by the mandatory process of consultations with stakeholders. Equally, the manner in which the protests were handled leaves much to be desired. A certain arrogance informed the government’s approach from the very beginning. What prevented the agricultural minister, if not the PM himself, in going to the protest site, and talking to the farm leaders over a glass of lassi? The offer to keep the laws in abeyance for some time could have been made much earlier, with the government assuring the farmers that there would be full discussions with them before the laws are implemented.

Reforms are desirable, but in a democracy, opposition to them — some of it very valid — must be taken on board. Besides, a large number of the protestors are from the sensitive border state of Punjab, which has seen radicalisation in the past, with the fullest support of Pakistan. It serves nobody’s purpose to see Punjab radicalised again. Such factors should have weighed in with the government. After the condemnable violence on January 26, the protest movement was demoralised, and farmers were leaving for home on their own volition. But Yogi Adityanath’s police gratuitously rekindled the protest again. The visual footage of a government using nails and ditches to barricade itself from its own people made for dramatic watching, and it is futile to believe that its audience was restricted only to India.

Now, the government has made a laughing stock of the nation by filing an FIR against unnamed “foreign” conspirators, citing Greta’s tool-kit tweet as evidence. Earlier, the government thought it fit to respond to Rihanna’s tweet. The correct response would have been to ignore such tweets. If, however, the government felt that such “global influencers” should be replied to, the appropriate way would have been for a letter from a bureaucrat to be delivered to these commentators through the agency of our embassies explaining the government’s point of view and saying that India as a democratic nation is well equipped to resolve such disputes. As the PM never tires of saying, we are a nation of “sawa karod” — 1.25 billion people. We are the world’s largest democracy, an emerging global super power. In a democracy there will be protests. Such protests, if they are allowed to linger on for so long, will attract global attention. Filing FIRs against those who comment is a highly immature and insecure way of responding.

The game of tarnishing the messenger has diminishing returns. First, the protesting farmers were called by some over-zealous supporters of the government as Khalistanis, Maoists, Urban Naxals and Pakistanis. Then the Opposition parties supporting the farmers were called anti-national. Now, foreign commentators are being accused of being part of an international conspiracy against India. All of this, when the real priority is to sensibly resolve the impasse with the farmers.