If the regional parties and the Congress in Assam manage to defeat BJP, these elections will mark a turning point in national politics 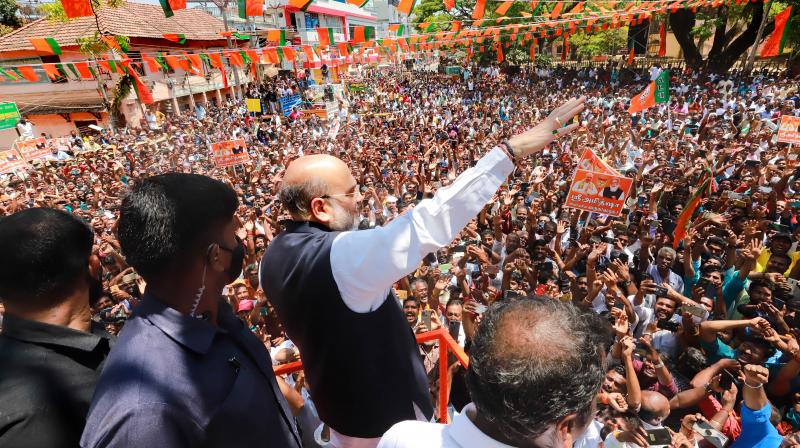 Elections to the state legislatures of Assam, Tamil Nadu, West Bengal and Kerala have acquired national relevance for more than one reason. The most important one, of course, is that the outcome would determine whether or not the Indian political system would once again be characterised by what political scientist Rajni Kothari once famously termed as “one party dominance”.

True, the BJP has already acquired a dominant national presence of the kind that the Indira Congress enjoyed well into the 1980s. But Kothari coined that term to capture the kind of sway across the country that the Indian National Congress enjoyed during the 1950s, when regional parties had not yet made their presence felt even at the provincial level.

Even though the BJP under Prime Minister Narendra Modi has acquired what political scientist Antonio Gramsci defined as “hegemony”, using instruments of the State to browbeat the Opposition, the fact is that regional formations like the Trinamul Congress and the Telangana Rashtra Samiti have been able to hold their own against the Hindutva juggernaut. If Mamata Banerjee’s Trinamul Congress, the DMK in Tamil Nadu and the Congress in Assam manage to defeat the BJP, these state legislature elections will mark a turning point in national politics. The outcome in Kerala is unlikely to favour the BJP, despite the rapid transit of “Metro Man” E. Sreedharan into provincial politics.

While psephologists and political analysts will analyse the political implications of the election outcome, investors and economists would want to know what the economic consequences of the outcome are likely to be. Many imagine that a nationwide sweep in favour of the BJP, reinforcing Hindutva dominance from West Bengal to Tamil Nadu, will be good for business and the economy. Single party dominance, they imagine, would further strengthen Prime Minister Modi’s hands and that he would then be able to push through the agenda of building an “Atma Nirbhar Bharat”, restoring momentum to a sagging economy.

Statistical evidence, however, does not seem to bear this hypothesis out. In India’s seven-decade experience with democracy, the interesting fact is that the era of single party dominance has been correlated with a lower rate of economic growth than what former Prime Minister Vishwanath Pratap Singh famously called the “era of coalitions”, with its multi-party governments. Consider the numbers.

Between 1947 and 1977, the era of the Congress Party’s dominance, the average annual rate of growth of the economy was around 3.5 per cent. Though the 1980s also saw single party government in New Delhi, it was the decade in which state governments run by regional political parties proliferated. The Indira Congress of the 1980s was no longer as powerful across the country as the Congress under Jawaharlal Nehru was during the 1950s.

Despite the weakening of Congress dominance and the rise of minority and coalition governments in the last two decades of the last century, the rate of economic growth picked up and the average annual rate of growth of national income was 5.5 per cent during 1980 to 2000.  Granted that correlation does not imply causation, but the evidence of the first two decades of the 21st century is convincing. Prime Minister Manmohan Singh led a minority government that had the support of a fractious coalition and yet he delivered historically high rates of economic growth. Between 2003 and 2011 the Indian economy grew at an annual average of close to 8.0 per cent. It slipped a bit below that during the last three years of the Manmohan Singh government, but the average was still around 7.5 per cent.

The last data point seals the argument. After having established a single party government in New Delhi for the first time in three decades and asserting BJP dominance at the national level, Prime Minister Modi has not been able to improve the performance of the economy. After six years in national office, Mr Modi has not been able to push the investment rate above 30 per cent and the average annual rate of economic growth, keeping the Covid-19 year 2020-21 out, is nowhere near the rate of growth attained during the Manmohan Singh years.  Even if Covid-19 had not struck the economy, the annual average rate of economic growth during 2014-21 would have been closer to 6.0 per cent rather than the 8.0 per cent recorded during 2003-11.

Economist Surjit Bhalla, now an executive director on the board of the International Monetary Fund representing India, made an interesting politico-economic forecast in April 2014, writing in the Financial Times of London. If the elections of 2014 threw up a single party majority government, he argued, the economy would be able to return to an average annual rate of economic growth of 8.0 per cent, that India had recorded till 2011.

Well, the fact is that the elections did produce a decisive mandate in favour of Prime Minister Modi but he has not been able to pull the rate of economic growth back to the Manmohan Singh average of 8.0 per cent. This has not been for want of trying. So the assumption that a strong, stable single party government would deliver economic performance superior to a weak, unstable, multi-party coalition was yet again disproved.

What this means is that encouraging political competition and ensuring that political parties in government are under the constant pressure of a critical and assertive Opposition is in fact good for governance and the economy. One party dominance delivers sub-optimal performance at least in part because the absence of the pressure of competition ends up in not ensuring performance.

To cut a longer story short, an outright victory for the BJP in the coming state Assembly elections may not be the best thing that could happen to the economy. Rather, the emergence of a viable and assertive Opposition that exerts competitive pressure on the dominant party, at the centre and in the states, may yield better economic results. Many of the policy mistakes of the Modi government during its second term in office are clearly a consequence of the arrogance of power. A new lease of life for non-BJP parties may be good for the polity and the economy.